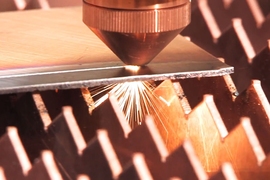 Attempts have been made over the years to amplify the brightness of these valuable lasers for industrial applications, such as welding and cutting metal. But boosting power usually means decreasing beam quality, or focus. And the beam never gets intense enough to melt metal.

Now MIT Lincoln Laboratory spinout TeraDiode is commercializing a multikilowatt diode laser system that’s bright enough to cut and weld — even through a half-inch of steel — at greater efficiencies than today’s industrial lasers.

The 4-kilowatt TeraBlade runs on a novel power-scaling technique developed at MIT that manipulates individual diode laser beams into a single output ray. This allows for boosting power of a diode laser, while preserving a very focused beam.

“[The TeraBlade] has comparable beam quality as compared with traditional manufacturing lasers, such as carbon dioxide, disk, and fiber,” says TeraDiode co-founder and vice president Robin Huang, a former Lincoln Laboratory researcher and TeraBlade co-inventor. “However, because the TeraBlade is a direct-diode laser, it has the highest efficiency and lowest cost of ownership as compared with these other lasers.”

Huang says TeraBlade represents a “third generation” of industrial lasers. The first generation, which evolved a few decades ago, was carbon dioxide lasers, in which electricity runs through a gas to produce light. These are very bright, but can be as large as trucks and operate at about 20 percent efficiency.

Then came diode-pumped solid-state (DPSS) lasers — including disk and fiber — that first transfer energy from diode lasers into a medium, usually a crystal, before converting it into a laser beam. These operate only up to about 30 percent efficiency.

But the TeraBlade, aptly called a “direct-diode” laser, uses light directly from the diodes, skipping the DPSS conversion step and saving energy, Huang says. This means the TeraBlade operates with just as much power and brightness as all other industrial lasers — about 2,600 megawatts per square centimeter per steradian — at roughly 40 percent efficiency.

At the core of the TeraBlade is a power-scaling technique known as wavelength beam combining (WBC), or incoherent beam combining, developed by Huang and former Lincoln Laboratory researcher and TeraDiode co-founder Bien Chann, who is now the company’s vice president and chief technology officer.

Diode lasers are tiny semiconductor devices that, when electrically charged, cause electrons to create photons of the same wavelength, or color, traveling in the same direction. When fed through an output collimation lens, this creates a ray of laser light.

An individual diode laser — in, say, a laser pointer — can emit a beam, in infrared and near-infrared wavelengths, that can be tightly focused to a very small spot, but with little power, Huang explains. Overlapping many similar beams at differing wavelengths, however, produces a beam that focuses on a small spot, making it very intense. And the number of overlapping beams with differing wavelengths can be very high.

In the early 2000s, Huang, Chann, and Lincoln Laboratory colleagues built a few prototype lasers based on WBC technology. One, which reached a power level of 50 watts, “was a world’s record for diode laser brightness at that time,” Huang says.

In 2009, Huang and Chann — along with Fred Leonberger, a former Lincoln Laboratory staffer who now serves on TeraDiode’s board of directors, and former CEO David Sossen — launched TeraDiode, now in Wilmington, Mass., to bring the technology to market. (The company’s current CEO is photonics entrepreneur Parviz Tayebati.)

Today, the WBC-based TeraBlade is a laser module that contains diode laser bars (long arrays of diode lasers), a transform lens, a diffraction grating, and an output lens. The light from the diode lasers passes through a transform lens, onto the carefully positioned diffraction grating, a plate of glass scratched with parallel lines. However, instead of dispersing light at different angles — which it’s designed to do — the grating forces the beams into the same direction, superimposing them on one another.

There are a few other multikilowatt direct-diode lasers, but they run on another popular and similar power-scaling technique, called side-by-side or spatial beam combining, that joins together the beams of similar wavelengths. As the number of diode lasers increases, the beam quality degrades, resulting in a large focused spot, limiting the beam’s intensity.

Each TeraBlade module outputs about 1,000 watts and can be scaled to increase power. The company has also developed a commercial TeraBlade system: a 3-foot cube that comes with multiple laser engines, a control computer, power supplies, and an output head for welding and cutting, among other components.

Increasingly, the TeraDiode technology is finding customers in countries such as Japan and Germany, where energy costs are high, Huang says.

In April, the company began shipping its system to Panasonic Welding Systems in Europe and Japan. Other customers include top global builders of industrial laser-based machines and system integrators.

“More broadly, our vision is to revolutionize the laser industry,” Huang says, by introducing powerful direct-diode lasers to various applications across the globe.

In the future, he adds, the company is also looking toward defense applications. One idea is to build a laser that acts as a heat-seeking missile deterrent: It fires infrared laser light at the missile, which would confuse the missile’s programming, and cause it to lose its target. The laser’s compact design would allow it to be mounted on a fighter jet.

With the TeraBlade technology, Huang says, “The sky is the limit — literally.”

“A new diode laser that can cut metal may soon find its way onto the market, thanks to a few former MIT scientists looking to commercialize their research,” writes Brooke Hays for UPI about Lincoln Laboratory spinout TeraDiode’s multi-kilowatt diode laser system.

Several of the 2020 winning innovations apply artificial intelligence techniques to solutions for challenges to national security.