Transparent displays have a variety of potential applications — such as the ability to see navigation or dashboard information while looking through the windshield of a car or plane, or to project video onto a window or a pair of eyeglasses. A number of technologies have been developed for such displays, but all have limitations.

Now, researchers at MIT have come up with a new approach that can have significant advantages over existing systems, at least for certain kinds of applications: a wide viewing angle, simplicity of manufacture, and potentially low cost and scalability.

The innovative system is described in a paper published this week in the journal Nature Communications, co-authored by MIT professors Marin Soljačić and John Joannopoulos, graduate student Chia Wei Hsu, and four others.

Many current “heads-up” display systems use a mirror or beam-splitter to project an image directly into the user’s eyes, making it appear that the display is hovering in space somewhere in front of him. But such systems are extremely limited in their angle of view: The eyes must be in exactly the right position in order to see the image at all. With the new system, the image appears on the glass itself, and can be seen from a wide array of angles.

Other transparent displays use electronics directly integrated into the glass: organic light-emitting diodes for the display, and transparent electronics to control them. But such systems are complex and expensive, and their transparency is limited.

The secret to the new system: Nanoparticles are embedded in the transparent material. These tiny particles can be tuned to scatter only certain wavelengths, or colors, or light, while letting all the rest pass right through. That means the glass remains transparent enough to see colors and shapes clearly through it, while a single-color display is clearly visible on the glass.

To demonstrate the system, the team projected a blue image in front of a scene containing cups of several colors, all of which can clearly be seen through the projected image. 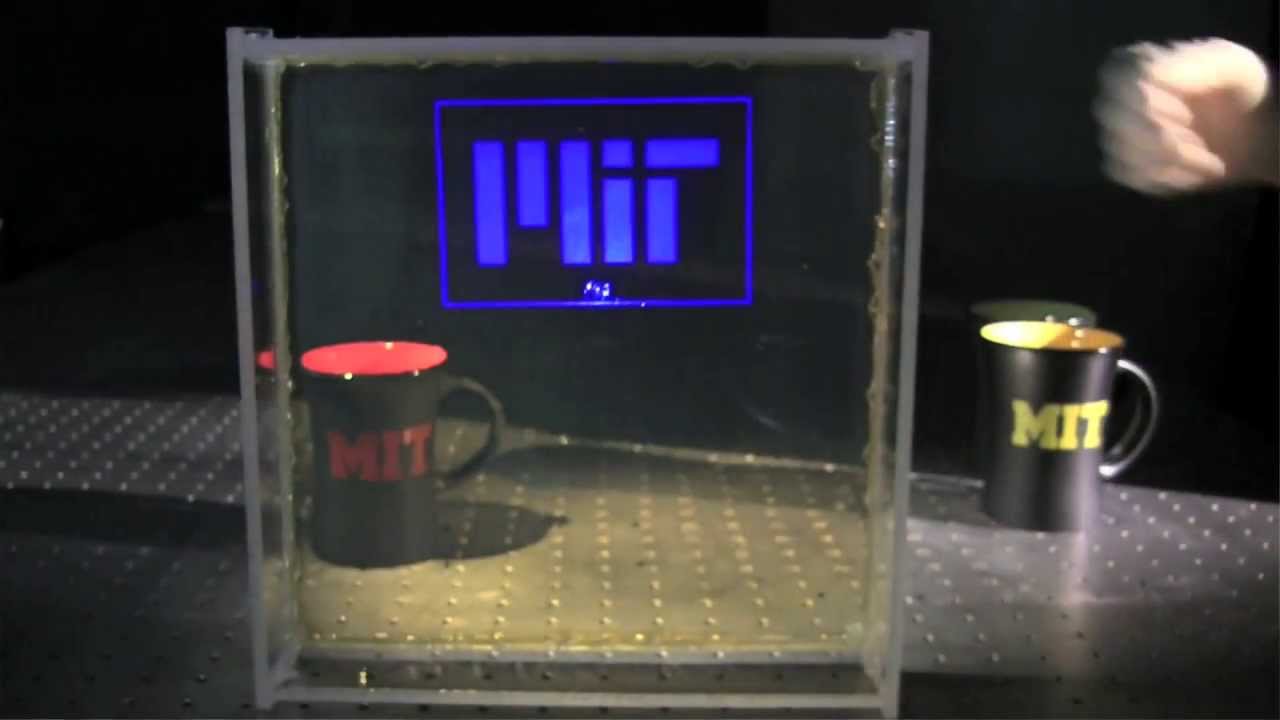 While the team’s demonstration used silver nanoparticles — each about 60 nanometers across — that produce a blue image, they say it should be possible to create full-color display images using the same technique. Three colors (red, green, and blue) are enough to produce what we perceive as full-color, and each of the three colors would still show only a very narrow spectral band, allowing all other hues to pass through freely.

“The glass will look almost perfectly transparent,” Soljačić says, “because most light is not of that precise wavelength” that the nanoparticles are designed to scatter. That scattering allows the projected image to be seen in much the same way that smoke in the air can reveal the presence of a laser beam passing through it.

Such displays might be used, for example, to project images onto store windows while still allowing passersby to see clearly the merchandise on display inside, or to provide heads-up windshield displays for drivers or pilots, regardless of viewing angle.

Soljačić says that his group’s demonstration is just a proof-of-concept, and that much work remains to optimize the performance of the system. Silver nanoparticles, which are commercially available, were selected for the initial testing because it was “something we could do very simply and cheaply,” Soljačić says. The team’s promising results, even without any attempt to optimize the materials, “gives us encouragement that you could make this work better,” he says.

The particles could be incorporated in a thin, inexpensive plastic coating applied to the glass, much as tinting is applied to car windows. This would work with commercially available laser projectors or conventional projectors that produce the specified color.

“This is a very clever idea using the spectrally selective scattering properties of nanoparticles to create a transparent display,” says Shanhui Fan, a professor of electrical engineering at Stanford University who was not involved in this work. “I think it is a beautiful demonstration.”