Expert on computer vision, robotics, and human-robot interaction had been on the faculty since 1994.
News Office
Publication Date:
Press Inquiries 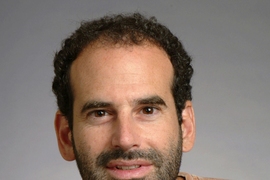 Seth Teller, a professor of computer science and engineering at MIT who was well known for his efforts to advance human-robot interactions, died yesterday. He was 50, and he had been a member of the MIT faculty since 1994.

President L. Rafael Reif announced the news in an email to the MIT community.

“I knew Seth as a person of great human warmth and intellectual intensity,” Reif wrote in his letter. “He was a brilliant engineer and a gifted advisor with a passion for new challenges. His loss is difficult to grasp.”

Teller was a member of MIT’s Department of Electrical Engineering and Computer Science (EECS) and Computer Science and Artificial Intelligence Laboratory (CSAIL). He led CSAIL’s Robotics, Vision, and Sensor Networks group, whose work aims to enable machines to become aware of their surroundings and interact naturally with people in health-care, military, civilian, and disaster-relief settings.

“Seth’s outstanding contributions as a researcher, teacher, mentor, and colleague set a standard that has inspired many of us,” EECS Department Head Anantha Chandrakasan and CSAIL Director Daniela Rus wrote in a joint letter to their communities. “He had a unique ability to envision new approaches to problems, then assemble, motivate, and guide large research teams to accomplish things far beyond what they thought possible. As a colleague his reflexive openness and friendliness were a delight; he always seemed to have something new to talk about and he shared it in a way that drew you into the excitement that bubbled up from him.”

The overarching theme of Teller’s research could be described as making robots that work with, for, and as extensions of people. His recent projects included wearable devices that provide information about nearby terrain, objects, text, and people to the visually impaired; a self-driving car; an unmanned, semiautonomous forklift; a robotic wheelchair operated by voice command; and a humanoid robot that performs dangerous tasks with limited human assistance.

“Seth had so many talents — as a builder of novel systems, and a master of a broad range of disciplines including robotics, vision, graphics, and human-computer interfaces,” says colleague John Leonard, a professor of mechanical and ocean engineering. “He has left a profound legacy in robotics.”

Teller led the MIT team that will compete in the final round of the prestigious DARPA Robotics Challenge (DRC), a competition sponsored by the Department of Defense’s Defense Advanced Research Projects Agency (DARPA) to promote innovation in robotics technology for disaster response. The competition calls for a humanoid robot to perform a series of tasks related to a disaster-response scenario.

Last December, the MIT team secured one of 11 prized spots in the final round of the DRC, currently slated for June 2015. The team participated in two rounds of competition, beating out more than 100 other teams, to secure a place in the finals. During the latest round of competition, the MIT team had to navigate a humanoid robot through a series of trials including walking, climbing, and handling tools and other objects.

From automobiles to forklifts

The way in which Teller transitioned from automated cars to automated forklifts illustrated two of his abiding concerns: Beyond the technical feat of simply getting the forklift to do what it’s instructed to do, his team concentrated on making its movements predictable. The problem of robotic trajectory planning is enormously complicated; in the interest of efficiency, roboticists typically employ planning algorithms that, while easy to compute, yield jerky and counterintuitive movements.

Because Teller was interested in robots that could blend seamlessly into human environments, his group also concentrated on planning algorithms that would make their motions smoother and less obtrusive.

Technologies to assist those with disabilities

Teller’s group also participated in the development of another autonomous, voice-controlled vehicle: a wheelchair that responded to spoken, rather than mechanical, commands. That project illustrated another of Teller’s longstanding interests: assistive technologies. Indeed, in 2012, together with his fellow EECS professor Rob Miller, Teller introduced MIT’s first undergraduate course on assistive technologies.

In recent years, Teller’s research group turned its attention to developing assistive technologies for people with a variety of disabilities: self-driving wheelchairs for people with multiple sclerosis, Lou Gehrig’s disease, or brain or spinal cord injuries, as well as wearable machine-vision systems for blind and visually impaired people.

As a leader of MIT’s Fifth Sense Project, Teller worked with others to develop wearable devices for blind and low-vision people. These devices combine sensing, computation, and interaction to provide wearers with timely, task-relevant information about their surroundings — the kind of information that sighted people typically get without conscious effort.

Last December, the Fifth Sense Project — and Teller — featured prominently in a visit to MIT by the famed Italian tenor Andrea Bocelli, whose foundation had awarded funding to the project. At the event, Teller described the goal of the project as “developing portable, wearable devices that [can] enable blind and visually impaired people to participate independently in daily activities. … We’re pursuing a multidisciplinary approach to solving these problems in the real world.”

“Many of the ideas that were impossible decades ago are now possible,” Teller added, “but we’re trying to go from impossible to possible in principle, to practical and usable by real people, and finally to devices that are affordable. We’re early on the road to satisfying these requirements.”

Even as Teller sought to make robots more humanlike, he also sought to abet human capacities with the types of sensor systems employed by robots. Another recent project aimed to develop a system to prevent injuries to police officers who, in the line of duty, frequently stop on the shoulders — or sometimes, when arriving at accident scenes, in the travel lanes — of busy roadways. The system works in two directions: In the first, a sensor system warns officers of approaching vehicles that are veering dangerously; in the second, a roof-mounted laser warns drivers of obstructions ahead, eliminating the need for officers to engage in the dangerous activity of setting out flares or cones in the roadway.

In the 1990s, Teller pioneered 3-D mapping of large urban spaces with the City Scanning Project, which created high-resolution 3-D models of parts of Cambridge using robot-mounted digital cameras and specialized algorithms to estimate the cameras’ positions and orientations. He also worked with his MIT colleagues to create the Cricket Indoor Location System, a network of radiofrequency and ultrasonic beacons that provided GPS-like position and attitude determination indoors.

Earlier this year, Teller was named the best undergraduate academic advisor by MIT’s IEEE/ACM Student Club. Over the course of his career, Teller received other honors including a Faculty Early Career Development Award from the National Science Foundation, in 1995, and naming by the Alfred P. Sloan Foundation as a Sloan Research Fellow, in 1997.

The author of more than 200 research papers, Teller won awards for the best paper or presentation at the International Conference on Virtual Systems and Multimedia (2001), the Conference on Embedded Networked Sensor Systems (2004), and CAAD 07 (2007).

Gifts in Teller's memory may be made to the Seth Teller Memorial Fund, which will support research, education, and other innovations that advance and improve assistive technology for people with a range of disabilities.

The Institute’s support services are available to all members of the MIT community and can be accessed via MIT Together, or at 617-253-2916.