Modeling shockwaves through the brain 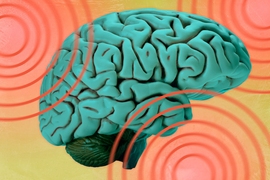 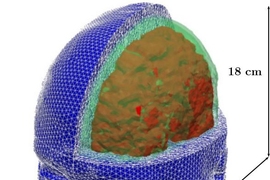 ↓ Download Image
Caption: MIT researchers have developed a model of the human head for use in simulations to predict the risk for blast-induced traumatic brain injury. Relevant tissue structures include the skull (green), brain (red), and flesh (blue).
Credits: Courtesy of the researchers

Caption:
MIT researchers have developed a model of the human head for use in simulations to predict the risk for blast-induced traumatic brain injury. Relevant tissue structures include the skull (green), brain (red), and flesh (blue).
Credits:
Courtesy of the researchers

Since the start of the military conflicts in Iraq and Afghanistan, more than 300,000 soldiers have returned to the United States with traumatic brain injury (TBI) caused by exposure to bomb blasts — and in particular, exposure to improvised explosive devices, or IEDs. Symptoms of traumatic brain injury can range from the mild, such as lingering headaches and nausea, to more severe impairments in memory and cognition.

Since 2007, the U.S. Department of Defense has recognized the critical importance and complexity of this problem, and has made significant investments in traumatic brain injury research. Nevertheless, there remain many gaps in scientists’ understanding of the effects of blasts on the human brain; most new knowledge has come from experiments with animals.

Now MIT researchers have developed a scaling law that predicts a human’s risk of brain injury, based on previous studies of blasts’ effects on animal brains. The method may help the military develop more protective helmets, as well as aid clinicians in diagnosing traumatic brain injury — often referred to as the “invisible wounds” of battle.

“We’re really focusing on mild traumatic brain injury, where we know the least, but the problem is the largest,” says Raul Radovitzky, a professor of aeronautics and astronautics and associate director of the MIT Institute for Soldier Nanotechnologies (ISN). “It often remains undetected. And there’s wide consensus that this is clearly a big issue.”

While previous scaling laws predicted that humans’ brains would be more resilient to blasts than animals’, Radovitzky’s team found the opposite: that in fact, humans are much more vulnerable, as they have thinner skulls to protect much larger brains.

A group of ISN researchers led by Aurélie Jean, a postdoc in Radovitzky’s group, developed simulations of human, pig, and rat heads, and exposed each to blasts of different intensities. Their simulations predicted the effects of the blasts’ shockwaves as they propagated through the skulls and brains of each species. Based on the resulting differences in intracranial pressure, the team developed an equation, or scaling law, to estimate the risk of brain injury for each species.

“The great thing about doing this on the computer is that it allows you to reduce and possibly eventually eliminate animal experiments,” Radovitzky says.

The MIT team and co-author James Q. Zheng, chief scientist at the U.S. Army’s soldier protection and individual equipment program, detail their results this week in the Proceedings of the National Academy of Sciences.

Air (through the) head

A blast wave is the shockwave, or wall of compressed air, that rushes outward from the epicenter of an explosion. Aside from the physical fallout of shrapnel and other chemical elements, the blast wave alone can cause severe injuries to the lungs and brain. In the brain, a shockwave can slam through soft tissue, with potentially devastating effects.

In 2010, Radovitzky’s group, working in concert with the Defense and Veterans Brain Injury Center, a part of the U.S. military health system, developed a highly sophisticated, image-based computational model of the human head that illustrates the ways in which pressurized air moves through its soft tissues. With this model, the researchers showed how the energy from a blast wave can easily reach the brain through openings such as the eyes and sinuses — and also how covering the face with a mask can prevent such injuries. Since then, the team has developed similar models for pigs and rats, capturing the mechanical response of brain tissue to shockwaves.

In their current work, the researchers calculated the vulnerability of each species to brain injury by establishing a mathematical relationship between properties of the skull, brain, and surrounding flesh, and the propagation of incoming shockwaves. The group considered each brain structure’s volume, density, and celerity — how fast stress waves propagate through a tissue. They then simulated the brain’s response to blasts of different intensities.

“What the simulation allows you to do is take what happens outside, which is the same across species, and look at how strong was the effect of the blast inside the brain,” Jean says.

In general, they found that an animal’s skull and other fleshy structures act as a shield, blunting the effects of a blast wave: The thicker these structures are, the less vulnerable an animal is to injury. Compared with the more prominent skulls of rats and pigs, a human’s thinner skull increases the risk for traumatic brain injury.

This finding runs counter to previous theories, which held that an animal’s vulnerability to blasts depends on its overall mass, but which ignored the role of protective physical structures. According to these theories, humans, being more massive than pigs or rats, would be better protected against blast waves.

Radovitzky says this reasoning stems from studies of “blast lung” — blast-induced injuries such as tearing, hemorrhaging, and swelling of the lungs, where it was found that mass matters: The larger an animal is, the more resilient it may be to lung damage. Informed by such studies, the military has since developed bulletproof vests that have dramatically decreased the number of blast-induced lung injuries in recent years.

“There have essentially been no reported cases of blast lung in the last 10 years in Iraq or Afghanistan,” Radovitzky notes. “Now we’ve shifted that problem to traumatic brain injury.”

In collaboration with Army colleagues, Radovitzky and his group are performing basic research to help the Army develop helmets that better protect soldiers. To this end, the team is extending the simulation approach they used for blast to other types of threats.

His group is also collaborating with audiologists at Massachusetts General Hospital, where victims of the Boston Marathon bombing are being treated for ruptured eardrums.

“They have an exact map of where each victim was, relative to the blast,” Radovitzky says. “In principle, we could simulate the event, find out the level of exposure of each of those victims, put it in our scaling law, and we could estimate their risk of developing a traumatic brain injury that may not be detected in an MRI.”

Joe Rosen, a professor of surgery at Dartmouth Medical School, sees the group’s scaling law as a promising window into identifying a long-sought mechanism for blast-induced traumatic brain injury.

“Eighty percent of the injuries coming off the battlefield are blast-induced, and mild TBIs may not have any evidence of injury, but they end up the rest of their lives impaired,” says Rosen, who was not involved in the research. “Maybe we can realize they’re getting doses of these blasts, and that a cumulative dose is what causes [TBI], and before that point, we can pull them off the field. I think this work will be important, because it puts a stake in the ground so we can start making some progress.”

This work was supported by the U.S. Army through ISN.

Melissa Malamut of Boston Magazine writes that a team of MIT researchers has developed a new scaling law to estimate the risk of blast-induced traumatic brain injury. The new method could be useful in helping the military develop more protective helmets and in diagnosing traumatic brain injury, Malamut reports.

Sensing when the brain is under pressure