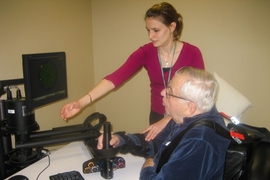 ↓ Download Image
Caption: After suffering a stroke, a patient learns to operate the robot MIT-Manus to improve mobility.
Credits: Photo courtesy of the researchers

Caption:
After suffering a stroke, a patient learns to operate the robot MIT-Manus to improve mobility.
Credits:
Photo courtesy of the researchers

The development of drugs to treat acute stroke or aid in stroke recovery is a multibillion-dollar endeavor that only rarely pays off in the form of government-approved pharmaceuticals. Drug companies spend years testing safety and dosage in the clinic, only to find in Phase III clinical efficacy trials that target compounds have little to no benefit. The lengthy process is inefficient, costly, and discouraging, says Hermano Igo Krebs, a principal research scientist in MIT’s Department of Mechanical Engineering.

“Most drug studies failed and some companies are getting discouraged,” Krebs says. “Many have recently abandoned the neuro area [because] they have spent so much money on developing drugs that don’t work. They end up focusing somewhere else.”

Now a robot developed by Krebs and his colleagues may help speed up drug development, letting pharmaceutical companies know much earlier in the process whether a drug will ultimately work in stroke patients.

To receive approval from the Food and Drug Administration, a company typically has to enroll 800 patients to demonstrate that a drug is effective during a Phase III clinical trial; this sample size is determined, in part, by the accuracy of standard outcome measurements, which quantify a patient’s ability over time to, say, lift her arm past a certain point. A clinical trial can take several years to enroll appropriate patients, run tests, and perform analyses.

The study’s authors found that by using a robot’s measurements to gauge patient performance, companies might only have to test 240 patients to determine whether a drug works — a reduction of 70 percent that Krebs says would translate to a similar reduction in time and cost.

While pharmaceutical companies would still have to adhere to the FDA’s established guidelines and outcome measurements to receive final drug approval, Krebs says they could use the robot measurements to guide early decisions on whether to further pursue or abandon a certain drug. If, after 240 patients, a drug has no measurable effect, the company can pursue other therapeutic avenues. If, however, a drug improves performance in 240 robot-measured patients, the pharmaceutical company can continue investing in the trial with confidence that the drug will ultimately pass muster.

The researchers, including senior author Bruce Volpe of the Feinstein Institute for Medical Research in Manhasset, N.Y., and Michael Krams, of Janssen Research Development in Titusville, N.J., have published their results in the journal Stroke.

Creating a translator for stroke recovery

In their study, Krebs and his colleagues explored the robot MIT-Manus as a tool for evaluating patient improvement over time. The robot, developed by the team at MIT’s Newman Laboratory for Biomechanics and Human Rehabilitation, has mainly been used as a rehabilitation tool: Patients play a video game by maneuvering the robot’s arm, with the robot assisting as needed.

While the robot has mainly been used as a form of physical therapy, Krebs says it can also be employed as a measurement tool. As a patient moves the robot’s arm, the robot collects motion data, including the patient’s arm speed, movement smoothness, and aim. For the current study, the researchers collected such data from 208 patients who worked with the robot seven days after suffering a stroke, and continued to do so for three months.

The researchers created an artificial neural network map that relates a patient’s motion data to a score that correlates with a standard clinical outcome measurement.

The authors then selected a separate group of nearly 3,000 stroke patients who did not use the robot, but who went through standard clinical tests. In particular, the researchers calculated the “effect size” — the difference in patient performance from the beginning to the end of a trial, divided by the standard deviation, or variability, of improvement among these patients. To determine whether a drug works, the FDA will often look to a study’s effect size.

The study’s authors went one step further and performed a power analysis that determines the optimal sample size for a given technique, finding that the robot scale would require only 240 patients to determine a drug’s effectiveness — a reduction in sample size that would save a company up to 70 percent in time and cost.

“Such a savings would be fantastic,” says David Reinkensmeyer, a professor of physical medicine and rehabilitation at the University of California at Irvine. “Robotic measurements will help us identify promising treatments with smaller numbers of patients and provide better insight into the mechanisms of the treatments, so that we can target those mechanisms and improve the treatments.”

Currently, only a few stroke drugs are in the late stages of development. However, once a company reaches a Phase III clinical trial, Krebs says it may use the MIT-Manus robot as a more efficient way to evaluate the drug’s impact by employing the measurement techniques on a smaller group of patients.