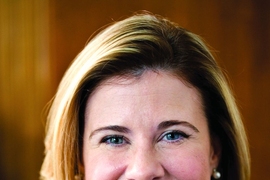 Julie A. Lucas has been named MIT’s next vice president for resource development, President L. Rafael Reif announced today. Her appointment is effective in November.

Lucas was present today at a gathering of MIT’s Resource Development and Alumni Association staffs, where she was introduced by Reif, who also informed the MIT community of the news by email.

A New England native, Lucas joins MIT from the University of Southern California, where she has been an associate senior vice president since 2012. She has also held senior advancement jobs at New York University and at Fordham University.

“Through a 20-year career in higher education — at USC, NYU and Fordham — Julie has built an exceptional record of fundraising success, from securing transformational gifts in support of USC’s current $6 billion campaign — $3.6 billion of which has been raised to date — to dramatically increasing the scale of giving and rates of participation at every institution she has served,” Reif wrote in his letter to the MIT community. “I am confident that Julie’s strategic insight, creative energy, and passion for advancing the mission of higher education will serve MIT very well, and I look forward to working with her as the Campaign unfolds.”

Lucas succeeds Jeffrey Newton, who announced his plans to retire as the Institute’s vice president for resource development last fall. At that time, Reif appointed Vice President and Secretary of the Corporation Kirk Kolenbrander to manage Resource Development until a new vice president could be named. Today, Reif thanked Kolenbrander for his service.

“Kirk is a consummate colleague,” Reif wrote. “A year ago, he accepted this serious new assignment, in addition to his existing job, in a field he had never worked in before — and he delivered superb results. I cannot express the depth of my personal gratitude and admiration for his willing spirit, dogged perseverance and masterful management, qualities I will continue to count on as we pursue the Institute’s ambitious priorities together. I have been inspired by watching him perform in this challenging role, and I hope you will join me in thanking him for his extraordinary service to MIT over the past year.”

Reif also thanked the staff of Resource Development for its work, noting that the fiscal year that closed in June was one of the most successful on record.

“The staff of Resource Development and the Alumni Association as well as our School Development Officers handled the challenges of this year with unfailing professionalism, patience and grace,” Reif wrote. “Because they stayed positive and confident, our donors did, too: The fiscal year that ended June 30, 2014, was the second strongest year for philanthropic fundraising in our history.”

In her new role, Lucas will lead efforts to garner support for MIT from individuals, corporations, and foundations. The vice president for resource development manages the planning, development, and implementation of MIT’s fundraising, including communications to donors and prospects; prospect research; solicitation of foundation, corporate, and individual donors; gift planning; donor stewardship; and fundraising accounting.

“I am extremely honored by this appointment,” Lucas says. “MIT is an amazing place, and Resource Development does outstanding work in service of the Institute. I can’t wait to get started.”

In prepared remarks for today’s gathering, Lucas said, “With our steadfast dedication we, as resource development professionals, have the opportunity to help empower MIT to forever change our world for the better. I accepted the incredible honor of President Reif’s offer because MIT is contributing to our society in countless and astounding ways and I could not think of a more meaningful way to offer myself to the cause to which I have dedicated my entire professional life.”

At USC, Lucas has helped to plan and implement an ongoing $6 billion campaign, developing strategies to cultivate gifts from top prospects. The schools she oversees have raised $1.4 billion toward this campaign, and 12 of them have launched school campaigns, representing $2.8 billion of the overall campaign’s target.

Lucas has solicited major gifts on behalf of USC, spearheading a global initiative to build relationships and raise capital worldwide. Working with development staff across USC’s schools, she created metrics for monitoring program effectiveness in individual schools and units. Finally, Lucas has overseen fundraising for University Village, a $600 million redevelopment project that is expected to provide university housing for 30 percent of USC undergraduates, and that represents the largest economic-development project in the history of South Los Angeles.

Lucas was an assistant vice president at Fordham from 2004 to 2010, first for law school development and then for external affairs. She also served as assistant dean of institutional advancement at Fordham Law School, where she oversaw a $100 million campaign, raising more money than had been raised in the previous 100-year history of the law school.

Lucas earned her BA in political science and Spanish from McDaniel College (formerly Western Maryland College) in 1995, and her MS in educational administration from Hofstra University in 1997. Before joining NYU, she worked in admissions at Hofstra.

Letter to the community on appointment of Julie Lucas

Letter to the community regarding Newton announcement