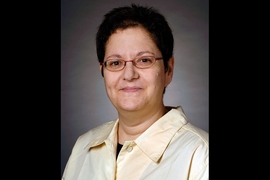 JoAnn Carmin, an associate professor of environmental policy and planning at MIT, died on Tuesday after an extended illness. She was 56 years old.

Carmin had been on the faculty of MIT’s Department of Urban Studies and Planning since 2003. Her work broke new ground in examining the relationship between environmental problems and governmental actions. In particular, over the last decade Carmin studied the process through which cities around the world were responding to climate change.

Carmin’s research relied on intensive fieldwork in cities, and on pioneering global surveys about the responses of urban leaders. She conducted extensive research on urban planning for climate change in Durban, South Africa, and Quito, Ecuador, among other places, describing in detail how local officials either found effective new ways of pushing climate planning forward, or ran into significant challenges.

Carmin’s work showed that many of the metropolises with the most advanced planning for climate change were not in the wealthiest parts of the world, but rather were in regions that were already subject to extreme weather events, or had experienced resource problems tied to climate. This trend was also evident in the quantitative surveys she helped launch.

Carmin also looked closely at the relationships among local, state, and national governments, uncovering the sometimes-fraught circumstances in which urban leaders attempted to gain support for climate initiatives from the other levels of government. Leaders in many cities, Carmin told MIT News in 2012, “feel that national governments don’t understand the challenges they face.”

Carmin was also direct and outspoken on the significance of climate change and the uneven progress communities and countries were making in dealing with it. “The issue is really critical,” she told MIT News in 2012, adding that for cities actively confronting climate problems, “Just being able to initiate a program is a big first step, but sustaining it is a huge challenge.”

Carmin co-edited four books on politics and environmental issues; she also wrote or co-authored more than two dozen journal articles, as well as more than a dozen book chapters or published reports. She gave talks and conference presentations at a wide variety of institutions on five continents, addressing audiences at universities and at organizations such as the World Bank.

Carmin also served as a lead author for a chapter of the U.S. National Climate Assessment, and for part of the Fifth Assessment Report of the Intergovernmental Panel on Climate Change, published in 2013.

“JoAnn was a friend and a close colleague,” said Eran Ben-Joseph, head of MIT’s Department of Urban Studies and Planning. “JoAnn quickly established herself as one of the world’s leading environmental sociologists. Her work on the role of social movements and institutions in shaping climate change policies has helped define climate-adaptation planning in cities across the world. She will be sorely missed.”

Carmin received her BS in 1990 from Cornell University, studying management and organizational behavior. She obtained an MS in management and organizational theory from Cornell in 1993, and received her PhD in 1999 from the University of North Carolina at Chapel Hill, in environmental policy and planning. Her dissertation was on environmental politics in the Czech Republic.

Before joining MIT in 2003, Carmin was an assistant professor at Virginia Tech and a visiting scholar at Duke University. At MIT, she was promoted to associate professor in 2006, and earned tenure in 2010.

Carmin was an active and energetic teacher who created classes at MIT on subjects including environmental justice; disaster vulnerability and resilience; urban climate adaptation; and rebuilding New Orleans in the aftermath of Hurricane Katrina. She served as a thesis advisor or reader for dozens of graduate students.

Carmin is survived by her sister, Cheryl Carmin, a professor at Ohio State University, and was close to many friends and colleagues. Donations in her memory can be made to the JoAnn Carmin Memorial Fund at MIT or to the World Wildlife Fund.

A liturgy and memorial service will be held on Thursday, July 17, at 7:00 p.m. at Shambhala Meditation Center of Boston, located at 646 Brookline St. in Brookline.