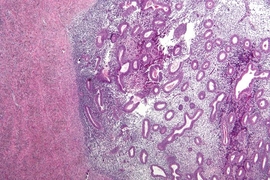 Caption:
A micrograph showing endometriosis (right) and ovarian stroma (left).
Credits:
Image: Wikipedia
Endometriosis, the invasive displacement of uterine tissue into surrounding organs, affects at least 10 percent of women. The disease, which is often misdiagnosed, can cause severe pain and infertility, but very little is known about how it arises.

In 2009, biological engineer Linda Griffith launched the Center for Gynepathology Research at MIT to study endometriosis and similar diseases. One of the center’s goals is to learn more about the molecular and cellular basis of endometriosis, to give scientists better drug targets and help doctors decide how to best treat individual patients.

Griffith and colleagues have now taken a step toward that goal, identifying a pattern of immune system signaling molecules that correlates with certain symptoms of endometriosis. They also identified the underlying cellular activity that produces this signature.

This signature, described in the Feb. 5 issue of Science Translational Medicine, could help scientists develop a patient stratification system similar to that used for breast cancer patients, whose treatments are tailored to the molecular profile of their tumors, says Griffith, the School of Engineering Professor of Teaching Innovation in MIT’s biological engineering and mechanical engineering departments, and a senior author of the paper.

“Endometriosis patients report symptoms of infertility and pain, and beyond that, it’s just kind of a guessing game. There are few molecular mechanisms known,” she says.

Keith Isaacson, director of the Newton-Wellesley Hospital Center for Minimally Invasive Gynecologic Surgery, is also a senior author of the paper. The paper’s lead author is Michael Beste, a postdoc in MIT’s Department of Biological Engineering.

Endometriosis is difficult to study because it can appear and disappear at different times in a woman’s life, and the symptoms and severity can vary greatly. Furthermore, the disease often goes undiagnosed or misdiagnosed for many years.

“The delay to a conclusive diagnosis can range anywhere from three to 15 years,” Beste says. “There’s a real need in the field to improve our understanding of both the basic biology and the clinical manifestations of the disease to better treat and improve the quality of life of affected women.”

In patients with endometriosis, cells from the lining of the uterus flow into the fallopian tubes and then into the peritoneal cavity, where they implant on organs including the ovaries, colon, and diaphragm. This produces lesions that can cause pain ranging from mild to debilitating, and can lead to infertility.

Aside from this basic mechanism, not much is known about how the disease arises and progresses.

Endometriosis is often treated with hormones that induce a menopause-like state. However, this is not a reliable cure and is not a good option for women who want to become pregnant. If the disease persists, surgery is necessary to remove the lesions, but this is not a permanent solution; many patients have to undergo several surgeries over their lifetime.

In the new study, the researchers analyzed peritoneal fluid from 77 patients who reported a wide range of symptom severity. For each sample, they measured 50 proteins, including inflammatory compounds known as cytokines. Cytokines regulate the body’s response to infectious agents but can also cause inflammation in the absence of any pathogen, as they do during endometriosis.

The researchers found a distinctive profile of cytokine activity associated with certain symptoms, specifically ovarian and rectovaginal lesions. This pattern, which included 13 cytokines, was also negatively correlated with patient fertility.

“A number of us have been dreaming that this kind of signature could come along, to be a complement to the much more clinical and visual approach we currently use,” says Robert Taylor, a professor of obstetrics and gynecology at Wake Forest School of Medicine who was not part of the research team. He added that such signatures would be especially useful if tests were developed that could detect them in urine or blood samples, which are easier to obtain than peritoneal fluid.

Many of the inflammatory compounds that make up the newly discovered signature have previously been implicated in endometriosis. One of the key regulators of this signature that the researchers identified is c-Jun, a protein that drives inflammation. This molecule has been linked to endometriosis before, and a drug that inhibits c-Jun is now in clinical trials to treat the disease.

The researchers also found that many of the molecules that make up their signature are secreted by macrophages, a type of immune cell that acts as a sentinel — patrolling tissues, digesting foreign material, and presenting it to other immune cells.

The team is now investigating the triggers for this immune response, which are likely not the same in every patient. They plan to analyze tissue from subsets of endometriosis patients, including those who experience infertility and those with deeply infiltrating lesions affecting the colon and other pelvic organs. They also hope to do a long-term study of patients who will be tracked from their first report of symptoms.

Such studies could help lead to new drug targets, as well as a better understanding of a highly complex disease, the researchers say.

“This paper isn’t to say we discovered the answer. We’re trying to start a conversation with a broad translational science community about this because it is such a terrible disease,” Griffith says. “We found something really interesting, but it’s only the tip of the iceberg, and if other clinicians are interesting in setting up a similar study with their patients, we’re happy to talk about collaborating with them.”

The research was funded by an anonymous foundation, the John D. and Catherine T. MacArthur Foundation, the National Institutes of Health, and the U.S. Army Research Office through the Institute for Collaborative Biotechnologies.

Amanda Schaffer reports on Professor Linda Griffith’s work with endometriosis in The New Yorker, explaining how Griffith, “analyzed how a whole network of cells and molecules interacts in some patients to cause inflammation, which triggers pain and may also spur the disease’s progression.”

Boston Globe reporter Carolyn Johnson examines a study led by MIT bioengineer Linda Griffith. The study is a first step in providing a more informed way of classifying endometriosis a disease which Griffith herself suffers from.