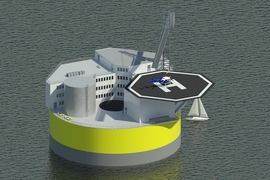 ↓ Download Image
Caption: This illustration shows a possible configuration of a floating offshore nuclear plant, based on design work by Jacopo Buongiorno and others at MIT's Department of Nuclear Science and Engineering. Like offshore oil drilling platforms, the structure would include living quarters and a helipad for transportation to the site.
Credits: Illustration courtesy of Jake Jurewicz/MIT-NSE 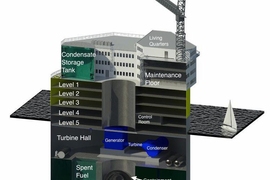 ↓ Download Image
Caption: Cutaway view of the proposed plant shows that the reactor vessel itself is located deep underwater, with its containment vessel surrounded by a compartment flooded with seawater, allowing for passive cooling even in the event of an accident.
Credits: Illustration courtesy of Jake Jurewicz/MIT-NSE

Caption:
This illustration shows a possible configuration of a floating offshore nuclear plant, based on design work by Jacopo Buongiorno and others at MIT's Department of Nuclear Science and Engineering. Like offshore oil drilling platforms, the structure would include living quarters and a helipad for transportation to the site.
Credits:
Illustration courtesy of Jake Jurewicz/MIT-NSE

Caption:
Cutaway view of the proposed plant shows that the reactor vessel itself is located deep underwater, with its containment vessel surrounded by a compartment flooded with seawater, allowing for passive cooling even in the event of an accident.
Credits:
Illustration courtesy of Jake Jurewicz/MIT-NSE

When an earthquake and tsunami struck the Fukushima Daiichi nuclear plant complex in 2011, neither the quake nor the inundation caused the ensuing contamination. Rather, it was the aftereffects — specifically, the lack of cooling for the reactor cores, due to a shutdown of all power at the station — that caused most of the harm.

A new design for nuclear plants built on floating platforms, modeled after those used for offshore oil drilling, could help avoid such consequences in the future. Such floating plants would be designed to be automatically cooled by the surrounding seawater in a worst-case scenario, which would indefinitely prevent any melting of fuel rods, or escape of radioactive material.

The concept is being presented this week at the Small Modular Reactors Symposium, hosted by the American Society of Mechanical Engineers, by MIT professors Jacopo Buongiorno, Michael Golay, and Neil Todreas, along with others from MIT, the University of Wisconsin, and Chicago Bridge and Iron, a major nuclear plant and offshore platform construction company.

Such plants, Buongiorno explains, could be built in a shipyard, then towed to their destinations five to seven miles offshore, where they would be moored to the seafloor and connected to land by an underwater electric transmission line. The concept takes advantage of two mature technologies: light-water nuclear reactors and offshore oil and gas drilling platforms. Using established designs minimizes technological risks, says Buongiorno, an associate professor of nuclear science and engineering (NSE) at MIT.

Although the concept of a floating nuclear plant is not unique — Russia is in the process of building one now, on a barge moored at the shore — none have been located far enough offshore to be able to ride out a tsunami, Buongiorno says. For this new design, he says, “the biggest selling point is the enhanced safety.”

A floating platform several miles offshore, moored in about 100 meters of water, would be unaffected by the motions of a tsunami; earthquakes would have no direct effect at all. Meanwhile, the biggest issue that faces most nuclear plants under emergency conditions — overheating and potential meltdown, as happened at Fukushima, Chernobyl, and Three Mile Island — would be virtually impossible at sea, Buongiorno says: “It’s very close to the ocean, which is essentially an infinite heat sink, so it’s possible to do cooling passively, with no intervention. The reactor containment itself is essentially underwater.”

Buongiorno lists several other advantages. For one thing, it is increasingly difficult and expensive to find suitable sites for new nuclear plants: They usually need to be next to an ocean, lake, or river to provide cooling water, but shorefront properties are highly desirable. By contrast, sites offshore, but out of sight of land, could be located adjacent to the population centers they would serve. “The ocean is inexpensive real estate,” Buongiorno says.

In addition, at the end of a plant’s lifetime, “decommissioning” could be accomplished by simply towing it away to a central facility, as is done now for the Navy’s carrier and submarine reactors. That would rapidly restore the site to pristine conditions.

This design could also help to address practical construction issues that have tended to make new nuclear plants uneconomical: Shipyard construction allows for better standardization, and the all-steel design eliminates the use of concrete, which Buongiorno says is often responsible for construction delays and cost overruns.

There are no particular limits to the size of such plants, he says: They could be anywhere from small, 50-megawatt plants to 1,000-megawatt plants matching today’s largest facilities. “It’s a flexible concept,” Buongiorno says. 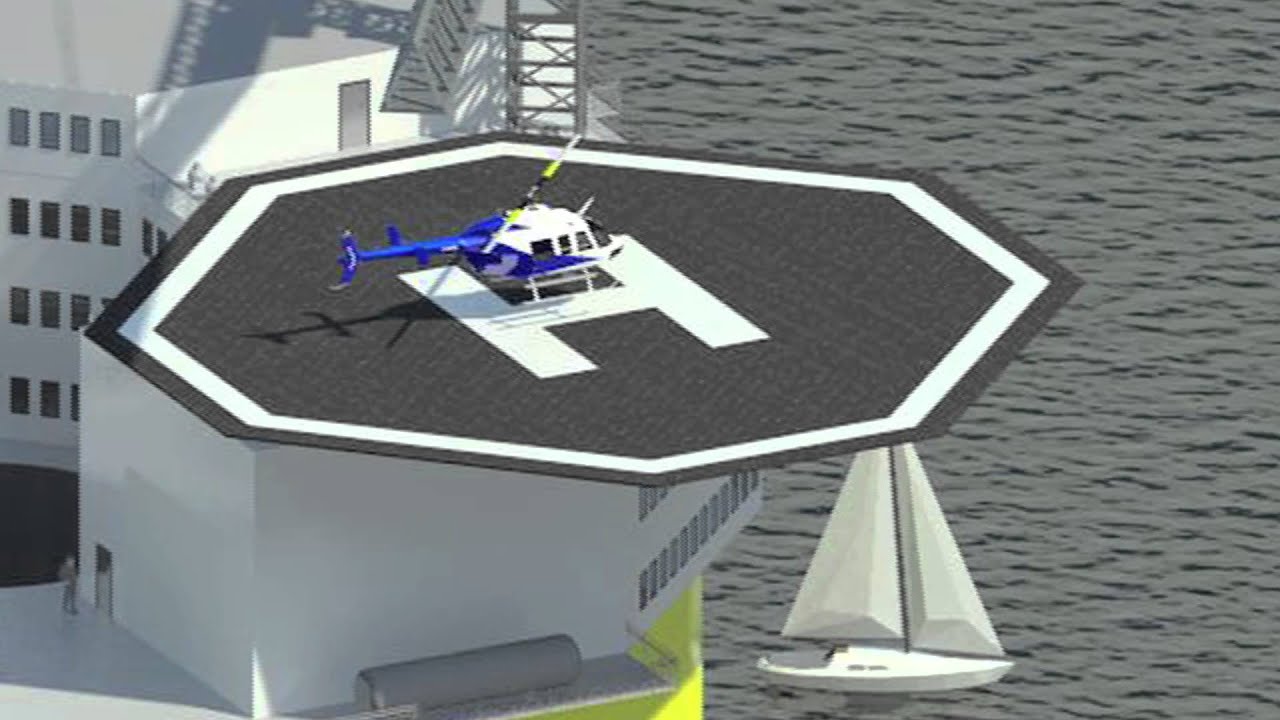 Most operations would be similar to those of onshore plants, and the plant would be designed to meet all regulatory security requirements for terrestrial plants. “Project work has confirmed the feasibility of achieving this goal, including satisfaction of the extra concern of protection against underwater attack,” says Todreas, the KEPCO Professor of Nuclear Science and Engineering and Mechanical Engineering.

Buongiorno sees a market for such plants in Asia, which has a combination of high tsunami risks and a rapidly growing need for new power sources. “It would make a lot of sense for Japan,” he says, as well as places such as Indonesia, Chile, and Africa.

This is a “very attractive and promising proposal,” says Toru Obara, a professor at the Research Laboratory for Nuclear Reactors at the Tokyo Institute of Technology who was not involved in this research. “I think this is technically very feasible. ... Of course, further study is needed to realize the concept, but the authors have the answers to each question and the answers are realistic.”

The paper was co-authored by NSE students Angelo Briccetti, Jake Jurewicz, and Vincent Kindfuller; Michael Corradini of the University of Wisconsin; and Daniel Fadel, Ganesh Srinivasan, Ryan Hannink, and Alan Crowle of Chicago Bridge and Iron, based in Canton, Mass.

“The floating plant design is very much setup like an offshore oil rig in that it has sections going deep underwater,” writes Liat Clark of Wired on research by Professor Jacopo Buongiorno that suggests building offshore nuclear power plants.

Sean Buckley of Engadget reports on a new design concept proposed by Professor Jacopo Buongiorno that calls for the construction of floating nuclear power plants to be placed several miles off shore. These facilities, anchored in deep water, would be virtually immune to natural disasters such as tsunamis and earthquakes.