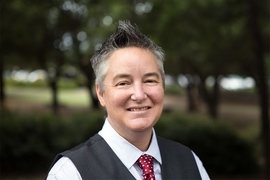 Chris Bourg has been named as the new director of the MIT Libraries, effective in February. Provost Martin Schmidt announced her appointment today in an email to the MIT community.

Bourg comes to MIT from Stanford University, where she is currently associate university librarian for public services. At Stanford, Bourg oversees the largest division of the Stanford University Libraries, with six branches and a collection of more than 4 million volumes.

Bourg has "a deep appreciation for the critical role of scholarly communication in a research university environment, and its links to education and service to the community," Schmidt wrote in his email to the community. “She also has considerable experience with leveraging the capabilities of digital technologies in order to enhance library services.”

Bourg joins the MIT Libraries and MIT Press at a pivotal time, and will play an important role in guiding the redesign and renovation of library spaces. She will also lead the exploration of the Libraries’ role in new modes of learning and global engagement, and advance MIT’s commitment and influence in the area of scholarly communication and open access.

“I am very much looking forward to working with Chris as she undertakes the leadership of the MIT Libraries, particularly at a time when the nature of library services is evolving to accommodate a variety of needs related to research and education,” Schmidt wrote. “I know you will join me in welcoming her to the MIT community.”

As a senior officer with oversight responsibility for the MIT Press, Bourg will also provide strategic guidance to the Press, expanding international engagement and managing its evolving business models. The MIT Press is one of the largest university presses in the world; it publishes journals, scholarly books, trade books, textbooks, and reference works in print and digital formats in a wide range of academic disciplines.

Bourg’s appointment follows a nationwide search that began after the death of the Libraries’ previous director of 17 years, Ann Wolpert, in October 2013.

“I have long admired MIT’s commitment to openness, inclusion, and innovation,” Bourg says. “It is an honor to join a community of faculty, staff, and students with a global reputation for excellence, integrity, and service. I look forward to engaging in conversations across the MIT community about the future of library spaces, services, and resources. Together, with the talented staff of the libraries and the MIT Press, we have the opportunity to build on MIT’s legacy and to be a leader in creating new models for scholarly communication and research libraries. I am eager to get started.”

Bourg’s distinguished career began with 10 years of service as an officer in the United States Army, including three years on the faculty of the United States Military Academy at West Point, where she taught sociology and leadership.

Bourg has served in various roles at the Stanford University Libraries over the past 12 years, with increasing responsibilities that included oversight of communications and information services. In her most recent role, she managed the public service facets of physical and digital library services, and was closely involved in the planning of two new library spaces on campus. She has also been a supporter of leveraging digital technologies to advance teaching and research, and is committed to open-access models for scholarly publishing.

Bourg received her BA from Duke University, her MA from the University of Maryland, and her MA and PhD in sociology from Stanford. She has written and spoken extensively on the topics of libraries, leadership, diversity, and social justice. She is a strong advocate for gender equality, and was involved in creating and leading the first Women’s Voices and Influence group for Stanford staff.

In her new role, Bourg will oversee a diverse staff of more than 260 in the MIT Libraries and the MIT Press. The MIT Libraries’ holdings include more than 5 million items in print and digital formats, including electronic journals and books, images, maps, musical scores, and sound and video recordings. There are five library locations on MIT’s campus: Barker, Dewey, Hayden, and Rotch libraries, and the Lewis Music Library. MIT’s library system also includes the Institute Archives and Special Collections, containing MIT’s founding documents, Institute records, and the papers of noted faculty.

In his letter to the community, Schmidt thanked Steve Gass, who has served as interim director of the MIT Libraries for the past year. “Steve has done an outstanding job in this role as the search process for a permanent director was conducted and I will miss his thoughtful advice and counsel,” Schmidt wrote.

Ann Wolpert, director of libraries, has died at 70