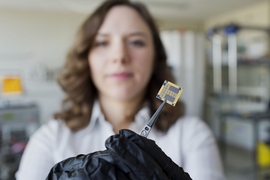 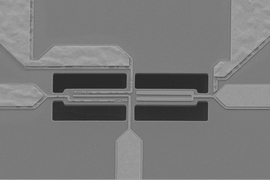 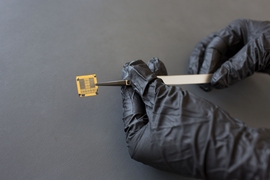 ↓ Download Image
Caption: Weinstein and Popa&#39;s experimental chip, which they manufactured at MIT&#39;s Microsystems Technology Laboratory, is divided into nine identical regions, each of which contains 65 resonators and additional circuitry required to test them.
Credits: Photo: M. Scott Brauer 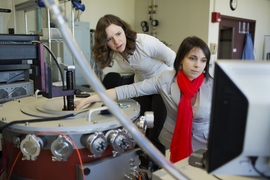 Caption:
Weinstein and Popa&#39;s experimental chip, which they manufactured at MIT&#39;s Microsystems Technology Laboratory, is divided into nine identical regions, each of which contains 65 resonators and additional circuitry required to test them.
Credits:
Photo: M. Scott Brauer

The way in which radio spectrum is currently allocated to different wireless technologies can lead to gross inefficiencies. In some regions, for instance, the frequencies used by cellphones can be desperately congested, while large swaths of the broadcast-television spectrum stand idle.

One solution to that problem is the 15-year-old idea of “cognitive radio,” in which wireless devices would scan their environments for vacant frequencies and use these for transmissions. Different proposals for cognitive radio place different emphases on hardware and software, but the chief component of many hardware approaches is a bank of filters that can isolate any frequency in a wide band.

Researchers at MIT’s Microsystems Technology Laboratory (MTL) have developed a new method for manufacturing such filters that should improve their performance while enabling 14 times as many of them to be crammed on a single chip. That’s a vital consideration in handheld devices where space is tight. But just as important, the new method uses techniques already common in the production of signal-processing chips, so it should be easy for manufacturers to adopt.

There are two main approaches to hardware-based radio-signal filtration: one is to perform the filtration electronically; the other is to convert the radio signal to an acoustic signal — a physical vibration — and then convert it back to an electrical signal. In work to be presented in June at the International Conference on Solid-State Sensors, Actuators and Microsystems, Dana Weinstein, the Steve and Renee Finn Career Development Assistant Professor of Electrical Engineering and Computer Science, and Laura Popa, a graduate student in physics, adopted the second approach. 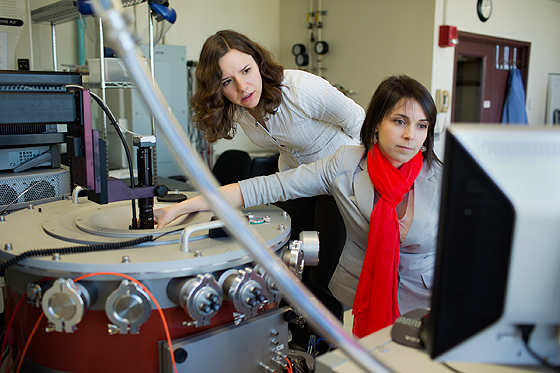 Both types of filtration use devices called resonators, and acoustic resonators have a couple of clear advantages over electronic ones. One is that their filtration is more precise.

“If I pluck a guitar string — that’s the easiest resonator to think of — it’s going to resonate at some frequency, and it’s going to die down due to losses,” Weinstein explains. “That loss is related to, basically, energy leaked away from that resonance mode into all other frequencies. Less loss means better frequency selectivity, and mechanical acoustic resonators have less loss than electrical resonators.”

But in practice, the number of acoustic resonators in a filtration bank has been limited. The heart of any device that converts electrical signals to mechanical vibrations, or vice versa, is a capacitor, which can be thought of as two parallel metal plates separated by a small distance.

“The capacitors change the impedance” — a measure of the ease with which a wave propagates — “that the antenna sees, so you may have unwanted reflections back into the antenna,” Weinstein says. “Each capacitor from each filter is going to affect the antenna, and that’s no good. It means I can only have so many filters, and therefore so many frequencies that I can separate my signal into.”

Another problem with acoustic resonators is that turning them on or off — a necessary step in the isolation of a particular transmission frequency — requires giving each resonator its own electrical switch. Traditionally, an incoming radio-frequency signal has had to pass through that switch before reaching the resonator, suffering some loss of quality in the process.

Weinstein and Popa solve both these problems at a stroke. Moreover, they do it by adapting a technology already common in wireless devices: a gallium nitride transistor.

Switching that channel to its nonconductive state is like removing the lower plate of the capacitor, which drastically reduces the capacitors’ effect on the quality of the radio signal. In experiments, the MTL researchers found that their resonators had only one-fourteenth the “capacitive load” of conventional resonators. “The radio can now afford to have 14 times as many filters attached to the antenna,” Weinstein says, “so we can span more frequencies.”

Switching the channel to its nonconductive state also turns the resonator off, so the researchers’ new design requires no additional switch in the path of the incoming signal, improving signal quality.

Finally, the new resonator uses only materials already found in the gallium arsenide transistors common in wireless devices, so mass-producing it should require no major modifications of existing manufacturing processes.

Commercial adoption of cognitive radio has been slow for a number of reasons. “Part of it is being able to get the frequency-agile components and do it in a cost-effective manner,” says Thomas Kazior, a principal engineering fellow at Raytheon. “Plus the size constraint: Filters tend to be big to begin with, and banks of tunable filters just make things even bigger.”

The MTL researchers’ work could help with both problems, Kazior says. “We’re talking about making filters that are directly integrated onto, say, a receiver chip, because the little resonator devices are literally the size of a transistor,” he says. “These are all on a tiny scale.”

“They can help with the cost problem because these resonator-type structures almost come for free,” Kazior adds. “Building them is part of the semiconductor fabrication process, using pretty much the existing fabrication steps that you’re using to build the transistor and the rest of the circuits. You just may need to add one, or two at the most, additional steps — out of 100 or more steps."