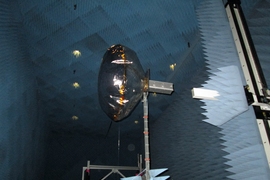 Credits:
Illustration: Christine Daniloff/MIT
The future of satellite technology is getting small — about the size of a shoebox, to be exact. These so-called “CubeSats,” and other small satellites, are making space exploration cheaper and more accessible: The minuscule probes can be launched into orbit at a fraction of the weight and cost of traditional satellites.

But with such small packages come big limitations — namely, a satellite’s communication range. Large, far-ranging radio dishes are impossible to store in a CubeSat’s tight quarters. Instead, the satellites are equipped with smaller, less powerful antennae, restricting them to orbits below those of most geosynchronous satellites.

Now researchers at MIT have come up with a design that may significantly increase the communication range of small satellites, enabling them to travel much farther in the solar system: The team has built and tested an inflatable antenna that can fold into a compact space and inflate when in orbit. 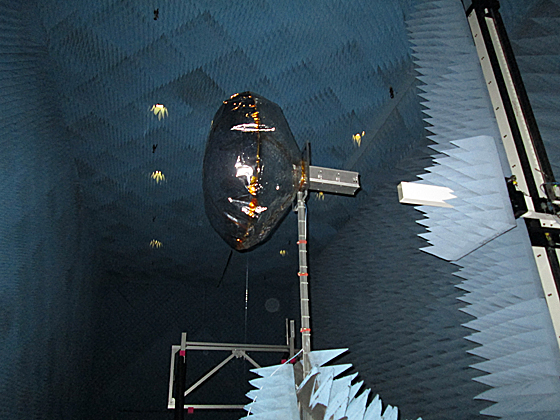 View of a CubeSat equipped with an inflated antenna, in a NASA radiation chamber. Photo: Alessandra Babuscia

The antenna significantly amplifies a radio signal, allowing a CubeSat to transmit data back to Earth at a higher rate. The distance that can be covered by a satellite outfitted with an inflatable antenna is seven times farther than that of existing CubeSat communications.

“With this antenna you could transmit from the moon, and even farther than that,” says Alessandra Babuscia, who led the research as a postdoc at MIT. “This antenna is one of the cheapest and most economical solutions to the problem of communications.”

The team, led by Babuscia, is part of Professor Sara Seager's research group and also includes graduate students Benjamin Corbin, Mary Knapp, and Mark Van de Loo from MIT, and Rebecca Jensen-Clem from the California Institute of Technology. The researchers, from MIT’s departments of Aeronautics and Astronautics and of Earth, Atmospheric and Planetary Sciences, have detailed their results in the journal Acta Astronautica.

An inflatable antenna is not a new idea. In fact, previous experiments in space have successfully tested such designs, though mostly for large satellites: To inflate these bulkier antennae, engineers install a system of pressure valves to fill them with air once in space — heavy, cumbersome equipment that would not fit within a CubeSat’s limited real estate.

Babuscia raises another concern: As small satellites are often launched as secondary payloads aboard rockets containing other scientific missions, a satellite loaded with pressure valves may backfire, with explosive consequences, jeopardizing everything on board. This is all the more reason, she says, to find a new inflation mechanism.

The team landed on a lighter, safer solution, based on sublimating powder, a chemical compound that transforms from a solid powder to a gas when exposed to low pressure.

“It’s almost like magic,” Babuscia explains. “Once you are in space, the difference in pressure triggers a chemical reaction that makes the powder sublimate from the solid state to the gas state, and that inflates the antenna.”

Babuscia and her colleagues built two prototype antennae, each a meter wide, out of Mylar; one resembled a cone and the other a cylinder when inflated. They determined an optimal folding configuration for each design, and packed each antenna into a 10-cubic-centimeter space within a CubeSat, along with a few grams of benzoic acid, a type of sublimating powder. The team tested each antenna’s inflation in a vacuum chamber at MIT, lowering the pressure to just above that experienced in space. In response, the powder converted to a gas, inflating both antennae to the desired shape.

The group also tested each antenna’s electromagnetic properties — an indication of how well an antenna can transmit data. In radiation simulations of both the conical and cylindrical designs, the researchers observed that the cylindrical antenna performed slightly better, transmitting data 10 times faster, and seven times farther, than existing CubeSat antennae.

An antenna made of thin Mylar, while potentially powerful, can be vulnerable to passing detritus in space. Micrometeroids, for example, can puncture a balloon, causing leaks and affecting an antenna’s performance. But Babuscia says the use of sublimating powder can circumvent the problems caused by micrometeroid impacts. She explains that a sublimating powder will only create as much gas as needed to fully inflate an antenna, leaving residual powder to sublimate later, to compensate for any later leaks or punctures.

The group tested this theory in a coarse simulation, modeling the inflatable antenna’s behavior with different frequency of impacts to assess how much of an antenna’s surface may be punctured and how much air may leak out without compromising its performance. The researchers found that with the right sublimating powder, the lifetime of a CubeSat’s inflatable antenna may be a few years, even if it is riddled with small holes.

“A directional antenna has been out of the question for CubeSats,” says Cheung, who was not involved in the research. “An inflatable antenna would enable orders of magnitude improvement in data return. This idea is very promising.”

Babuscia says future tests may involve creating tiny holes in a prototype and inflating it in a vacuum chamber to see how much powder would be required to keep the antenna inflated. She is now continuing to refine the antenna design at JPL.

“In the end, what’s going to make the success of CubeSat communications will be a lot of different ideas, and the ability of engineers to find the right solution for each mission,” Babuscia says. “So inflatable antennae could be for a spacecraft going by itself to an asteroid. For another problem, you’d need another solution. But all this research builds a set of options to allow these spacecraft, made directly by universities, to fly in deep space.”

An interdisciplinary approach to sustainable PPE

United under the Sustainability Incubator Fund, researchers strategize sustainable sourcing solution for crises at the local and global level.

Series paints a holistic picture of summer youth employment programs and how research helps strengthen them.

Results might provide a convenient screening tool for people who may not suspect they are infected.