How to make ceramics that bend without breaking 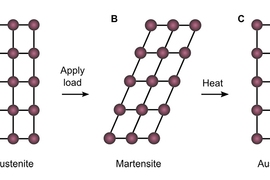 ↓ Download Image
Caption: When subjected to a load, the molecular structure of the ceramic material studied by the MIT-Singapore team deforms rather than cracking. When heated, it then returns to its original shape. Though they have the same chemical composition, the two molecular configurations correspond to different natural minerals, called austenite and martensite.
Credits: Graphic: Lai et al

Caption:
When subjected to a load, the molecular structure of the ceramic material studied by the MIT-Singapore team deforms rather than cracking. When heated, it then returns to its original shape. Though they have the same chemical composition, the two molecular configurations correspond to different natural minerals, called austenite and martensite.
Credits:
Graphic: Lai et al
Ceramics are not known for their flexibility: they tend to crack under stress. But researchers from MIT and Singapore have just found a way around that problem — for very tiny objects, at least.

The team has developed a way of making minuscule ceramic objects that are not only flexible, but also have a “memory” for shape: When bent and then heated, they return to their original shapes. The surprising discovery is reported this week in the journal Science, in a paper by MIT graduate student Alan Lai, professor Christopher Schuh, and two collaborators in Singapore.

Shape-memory materials, which can bend and then snap back to their original configurations in response to a temperature change, have been known since the 1950s, explains Schuh, the Danae and Vasilis Salapatas Professor of Metallurgy and head of MIT’s Department of Materials Science and Engineering. “It’s been known in metals, and some polymers,” he says, “but not in ceramics.”

In principle, the molecular structure of ceramics should make shape memory possible, he says — but the materials’ brittleness and propensity for cracking has been a hurdle. “The concept has been there, but it’s never been realized,” Schuh says. “That’s why we were so excited.”

The key to shape-memory ceramics, it turns out, was thinking small.

The team accomplished this in two key ways. First, they created tiny ceramic objects, invisible to the naked eye: “When you make things small, they are more resistant to cracking,” Schuh says. Then, the researchers concentrated on making the individual crystal grains span the entire small-scale structure, removing the crystal-grain boundaries where cracks are most likely to occur.

Those tactics resulted in tiny samples of ceramic material — samples with deformability equivalent to about 7 percent of their size. “Most things can only deform about 1 percent,” Lai says, adding that normal ceramics can’t even bend that much without cracking.

David Dunand, a professor of materials science and engineering at Northwestern University, says the MIT team “achieved something that was widely considered impossible,” finding “a clever solution, based on fundamental materials-science principles, to the Achilles’ heel of ceramics and other brittle materials.”

“Usually if you bend a ceramic by 1 percent, it will shatter,” Schuh says. But these tiny filaments, with a diameter of just 1 micrometer — one millionth of a meter — can be bent by 7 to 8 percent repeatedly without any cracking, he says.

While a micrometer is pretty tiny by most standards, it’s actually not so small in the world of nanotechnology. “It’s large compared to a lot of what nanotech people work on,” Lai says. As such, these materials could be important tools for those developing micro- and nanodevices, such as for biomedical applications. For example, shape-memory ceramics could be used as microactuators to trigger actions within such devices — such as the release of drugs from tiny implants.

Compared to the materials currently used in microactuators, Schuh says, the strength of the ceramic would allow it to exert a stronger push in a microdevice. “Microactuation is something we think this might be very good for,” he says, because the ceramic material has “the ability to push things with a lot of force — the highest on record” for its size.

The ceramics used in this research were made of zirconia, but the same techniques should apply to other ceramic materials. Zirconia is “one of the most well-studied ceramics,” Lai says, and is already widely used in engineering. It is also used in fuel cells, considered a promising means of providing power for cars, homes and even for the electric grid. While there would be no need for elasticity in such applications, the material’s flexibility could make it more resistant to damage.

The material combines some of the best attributes of metals and ceramics, the researchers say: Metals have lower strength but are very deformable, while ceramics have much greater strength, but almost no ductility — the ability to bend or stretch without breaking. The newly developed ceramics, Schuh says, have “ceramiclike strength, but metallike ductility.”

Robert Ritchie, a professor of materials science and engineering at the University of California at Berkeley, says, “The very notion of superelastic ceramics is somewhat of a surprise. … We all know that ceramics invariably are extremely brittle.”

Ritchie, who was not connected with this work, points out that shape-memory metals are already used in satellite antennae and in self-expanding dental and cardiovascular prostheses. “Applying these concepts to ceramics, however,” he says, “is somewhat startling and raises many interesting possibilities.”

In addition to Schuh and Lai, the work was carried out by Zehui Du and Chee Lip Gan of Nanyang Technological University in Singapore.