Sizing up Japan, after the disaster 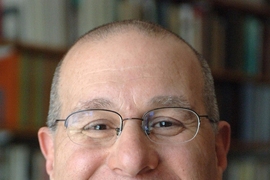 Caption:
Richard Samuels is the Ford International Professor of Political Science and director of MIT’s Center for International Studies.
Credits:
Photo: Donna Coveney
Around the world, people watched in horror as an earthquake and tsunami struck Japan on March 11, 2011, soon followed by the slow-motion meltdown of a nuclear reactor in Fukushima. In the days and weeks that followed, many observers expected to see a wave of political or social change sweep Japan as well.

“At that moment, it looked like everything was up for grabs,” says Richard Samuels, a professor in MIT’s Department of Political Science. “The Japanese themselves defined the moment that way. There was a paroxysm of claims that everything would change.”

Instead, as Samuels reflects, there was “nothing on the scale that most of us expected.” After a hiatus, several of Japan’s nuclear power plants came back on line, and more are likely to do so before long. Long-standing limitations on the role of the military, lauded for its relief efforts, were not lifted. Much-discussed changes in government structures did not come to pass.

Precisely how this turning point failed to turn is the subject of a new book by Samuels, the first full-length scholarly analysis of Japanese politics since the devastating events of 2011. The book, titled “3.11,” after the initial date of the event, is being published this month by Cornell University Press.

And while it is focused on Japan, Samuels’ book may have an important lesson for observers of other countries at a time when states around the world seem beset by political, military and economic crises: Even during great upheaval, entrenched interests are hard to dislodge.

“Political entrepreneurs come into crises with preferences that don’t change as a result of a crisis,” says Samuels, the Ford International Professor of Political Science and director of MIT’s Center for International Studies. Consider that in all of Japan, he adds, “There was only one political leader in the entire drama who changed his view about an important policy issue, and that was the prime minister, Naoto Kan, who became anti-nuclear.”

Samuels’ book is a detailed study of Japanese policy debates since 2011 regarding three issues in particular: energy policy, national security and local government. While the salience of energy policy would seem obvious to anyone who followed the aftermath of the earthquake and tsunami, the importance of the other issues might not be immediately apparent to outsiders.

However, Samuels notes, the Japanese military became a major player after 100,000 troops were deployed in the relief effort, probably the most visible military activity Japan has undertaken since World War II.

“Some of the most important heroes of the 3/11 narrative were wearing uniforms,” Samuels says.

Meanwhile, the question of local government came to the fore as local officials reacted more quickly and more effectively to the emergency, in some ways, than the central government did. Local officials, through their actions to help those most affected, “created a whole new sense of solidarity,” Samuels says.

In all of these areas, Samuels thinks, the politics were contested among three factions: those who wanted to use the disaster as an impetus for significant change, those who wanted to stay the course, and those who wanted to return to policies of the past. But the political lines of division varied in each case: On nuclear power, left-leaning activists wanted change in the direction of renewables, while the faction wanting military changes was further to the right, and wanted greater muscularity.

By itself, “Going forward or staying the course is not necessarily a left or right position,” Samuels says.

When it came to nuclear energy, for instance, Japan’s anti-nuclear activists, who had been “quiescent,” saw the problems at Fukushima as an obvious reason to end the country’s dependence on nuclear power. But a better-established group of people wanted to stay the course — including the influential nuclear-energy industry, which warned of potential economic and environmental problems if the nuclear plants remained offline (as they did for several months in 2011).

“The advocates of nuclear power went into hyper-drive and said this is not a sustainable path,” Samuels recounts. Massive anti-nuclear popular protests failed to gain long-term traction, and public confidence in the government’s ability to find a new energy solution dwindled. Kan, who decided to oppose the continued use of nuclear power, resigned in August 2011.

Before long, Samuels observes, “It was back to the pre-3/11 system.”

Similar inertia took hold in the military sphere, where Japan’s postwar policies have long been circumscribed by Article 9 of its postwar constitution, which limits the activity of the armed forces.

“The military acquitted itself very well,” Samuels says. “The legitimacy of the postwar military was hard-won, and by the end of this ordeal, it was more widely embraced than ever.” But that did not allow for the minority of Japanese who wished for a bigger military to enact any changes.

Samuels’ book has been well-received among Japan scholars so far; David Leheny of Princeton University says it “will likely be viewed as the essential work on post-disaster Japanese politics.” Disaster expert Charles Perrow of Yale University calls it “a much-needed and careful analysis.”

Samuels is willing to acknowledge surprise, on his part, in how few lasting policy changes the tumultuous events have produced so far.

“When we talk about crises, they are instruments, or tools,” Samuels reflects. “They’re not independently transformative. They’re tools in the service of people with preferences, and those preferences are remarkably sticky.”