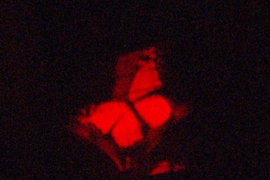 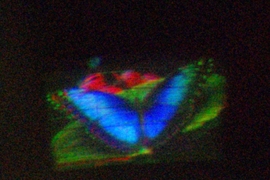 Caption:
A hologram of a butterfly, displayed on both a conventional, monochromatic holographic-video monitor (left) and the MIT researchers' new color monitor.

Credits:
Images: Daniel Smalley
Today in the journal Nature, researchers at MIT’s Media Lab report a new approach to generating holograms that could lead to color holographic-video displays that are much cheaper to manufacture than today’s experimental, monochromatic displays. The same technique could also increase the resolution of conventional 2-D displays.

Using the new technique, Daniel Smalley, a graduate student in the Media Lab and first author on the new paper, is building a prototype color holographic-video display whose resolution is roughly that of a standard-definition TV and which can update video images 30 times a second, fast enough to produce the illusion of motion. The heart of the display is an optical chip, resembling a microscope slide, that Smalley built, using only MIT facilities, for about $10.

Joining Bove and Smalley on the Nature paper are two other graduate students in Bove’s group, James Barabas and Sundeep Jolly, and Quinn Smithwick, who was a postdoc at MIT at the time but is now a research scientist at Disney Research.

When light strikes an object with an irregular surface, it bounces off at a huge variety of angles, so that different aspects of the object are disclosed when it’s viewed from different perspectives. In a hologram, a beam of light passes through a so-called diffraction fringe, which bends the light so that it, too, emerges at a host of different angles.

One way to produce holographic video is to create diffraction fringes from patterns displayed on an otherwise transparent screen. The problem with that approach, Bove explains, is that the pixels of the diffraction pattern have to be as small as the wavelength of the light they’re bending, and “most display technologies don’t happily shrink down that much.”

Stephen Benton, a Media Lab professor who died in 2003, created one of the first holographic-video displays by adopting a different technique, called acousto-optic modulation, in which precisely engineered sound waves are sent through a piece of transparent material. “The waves basically squeeze and stretch the material, and they change its index of refraction,” Bove says. “So if you shine a laser through it, [the waves] diffract it.”

Benton’s most sophisticated display — the Mark-II, which was built with the help of Bove’s group — applied acousto-optic modulation to a crystal of an expensive material called tellurium dioxide. “That was the biggest piece of tellurium dioxide crystal that had ever been grown,” Bove says. “And that wasn’t TV resolution. So there was a definite scaling problem going on there.”

Smalley instead uses a much smaller crystal of a material called lithium niobate. Just beneath the surface of the crystal he creates microscopic channels known as waveguides, which confine the light traveling through them. Onto each waveguide, he also deposits a metal electrode, which can produce an acoustic wave.

Each waveguide corresponds to one row of pixels in the final image. In the Mark-II, the tellurium dioxide crystal had to be big enough that the acoustic waves producing the separate lines of the hologram were insulated from each other. In Smalley’s chip, on the other hand, the waveguides with their individual electrodes can be packed mere micrometers apart from each other.

Beams of red, green and blue light are sent down each waveguide, and the frequencies of the acoustic wave passing through the crystal determine which colors pass through and which are filtered out. Combining, say, red and blue to produce purple doesn’t require a separate waveguide for each color; it just requires a different acoustic-wave pattern.

Bove considers that the most exciting aspect of the new chip. “Until now, if you wanted to make a light modulator for a video projector, or an LCD panel for a TV, or something like that, you had to deal with the red light, the green light and the blue light separately,” he says. “If you look closely at an LCD panel, each pixel actually has three little color filters in it. There’s a red subpixel, a green subpixel and a blue subpixel.”

“First of all,” he continues, “that’s inefficient, because the filters, even if they were perfect, would throw away two-thirds of the light. But second, it reduces either the resolution or the speed at which the modulator can operate.”

According to Smalley, on the other hand, “What’s most exciting about [the new chip] is that it’s a waveguide-based platform, which is a major departure from every other type of spatial light modulator used for holographic video right now.” Waveguides are already a common feature in commercial optoelectronics, Smalley explains, and techniques for manufacturing them are well established. “One of the big advantages here is that you get to use all the tools and techniques of integrated optics,” he says. “Any problem we’re going to meet now in holographic video displays, we can feel confidence that there’s a suite of tools to attack it, relatively simply.”

“This has the potential to be a game-changer, and I’m really serious about that,” says Pierre Blanche, an assistant research professor at the University of Arizona who is also researching holographic video. “It’s a huge achievement.”

The capacity of holographic-video displays is measured according to something called the space-bandwidth (SB) product, Blanche explains. “The SB product is the product between the number of pixels and their spatial frequency — the inverse of their size,” he says. “So we are looking for a large number of very small pixels. To have a large number of pixels is not really helpful if they are large.”

Blanche says that the experimental holographic-video system that he and Nasser Peyghambarian, chair of photonics and lasers at Arizona, are developing has some advantages over the MIT system. “Our images still have better quality,” he says. “But they achieve video rate and we haven’t. This is a very exciting time for us.”