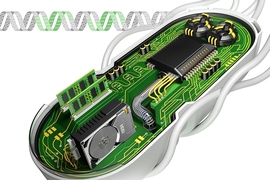 Caption:
Engineers at MIT have developed genetic circuits in bacterial cells that not only perform logic functions, but also remember the results.
Credits:
Image: Liang Zong and Yan Liang

MIT engineers have created genetic circuits in bacterial cells that not only perform logic functions, but also remember the results, which are encoded in the cell’s DNA and passed on for dozens of generations.

The circuits, described in the Feb. 10 online edition of Nature Biotechnology, could be used as long-term environmental sensors, efficient controls for biomanufacturing, or to program stem cells to differentiate into other cell types.

“Almost all of the previous work in synthetic biology that we’re aware of has either focused on logic components or on memory modules that just encode memory. We think complex computation will involve combining both logic and memory, and that’s why we built this particular framework to do so,” says Timothy Lu, an MIT assistant professor of electrical engineering and computer science and biological engineering and senior author of the Nature Biotechnology paper.

Synthetic biologists use interchangeable genetic parts to design circuits that perform a specific function, such as detecting a chemical in the environment. In that type of circuit, the target chemical would generate a specific response, such as production of green fluorescent protein (GFP).

Circuits can also be designed for any type of Boolean logic function, such as AND gates and OR gates. Using those kinds of gates, circuits can detect multiple inputs. In most of the previously engineered cellular logic circuits, the end product is generated only as long as the original stimuli are present: Once they disappear, the circuit shuts off until another stimulus comes along.

Lu and his colleagues set out to design a circuit that would be irreversibly altered by the original stimulus, creating a permanent memory of the event. To do this, they drew on memory circuits that Lu and colleagues designed in 2009. Those circuits depend on enzymes known as recombinases, which can cut out stretches of DNA, flip them, or insert them. Sequential activation of those enzymes allows the circuits to count events happening inside a cell.

Lu designed the new circuits so that the memory function is built into the logic gate itself. With a typical cellular AND gate, the two necessary inputs activate proteins that together turn on expression of an output gene. However, in the new circuits, the inputs stably alter regions of DNA that control GFP production. These regions, known as promoters, recruit the cellular proteins responsible for transcribing the GFP gene into messenger RNA, which then directs protein assembly.

For example, in one circuit described in the paper, two DNA sequences called terminators are interposed between the promoter and the output gene (GFP, in this case). Each of these terminators inhibits the transcription of the output gene and can be flipped by a different recombinase enzyme, making the terminator inactive.

Each of the circuit’s two inputs turns on production of one of the recombinase enzymes needed to flip a terminator. In the absence of either input, GFP production is blocked. If both are present, both terminators are flipped, resulting in their inactivation and subsequent production of GFP.

Once the DNA terminator sequences are flipped, they can’t return to their original state — the memory of the logic gate activation is permanently stored in the DNA sequence. The sequence also gets passed on for at least 90 generations. Scientists wanting to read the cell’s history can either measure its GFP output, which will stay on continuously, or if the cell has died, they can retrieve the memory by sequencing its DNA.

Using this design strategy, the researchers can create all two-input logic gates and implement sequential logic systems. “It’s really easy to swap things in and out,” says Lu, who is also a member of MIT’s Synthetic Biology Center. “If you start off with a standard parts library, you can use a one-step reaction to assemble any kind of function that you want.”

Such circuits could also be used to create a type of circuit known as a digital-to-analog converter. This kind of circuit takes digital inputs — for example, the presence or absence of single chemicals — and converts them to an analog output, which can be a range of values, such as continuous levels of gene expression.

For example, if the cell has two circuits, each of which expresses GFP at different levels when they are activated by their specific input, those inputs can produce four different analog output levels. Moreover, by measuring how much GFP is produced, the researchers can figure out which of the inputs were present.

That type of circuit could offer better control over the production of cells that generate biofuels, drugs or other useful compounds. Instead of creating circuits that are always on, or using promoters that need continuous inputs to control their output levels, scientists could transiently program the circuit to produce at a certain level. The cells and their progeny would always remember that level, without needing any more information.

Used as environmental sensors, such circuits could also provide very precise long-term memory. “You could have different digital signals you wanted to sense, and just have one analog output that summarizes everything that was happening inside,” Lu says.

This platform could also allow scientists to more accurately control the fate of stem cells as they develop into other cell types. Lu is now working on engineering cells to follow sequential development steps, depending on what kinds of inputs they receive from the environment.

“I anticipate that the innovations reported here will help to inspire larger synthetic biology efforts that push the limits of engineered biological systems,” says Jewett, who was not involved in the research.

The research was funded by the Office of Naval Research and the Defense Advanced Research Projects Agency.