Caption:
A transition electron microscope image of the structure of the new tungsten-titanium alloy, after being exposed to a high temperature of 1,100 degrees Celsius for a week. The image shows that the alloy retains its nanocrystalline structure even after this heat treatment.
Credits:
Image courtesy of Chookajorn et al, from <i>Science</i> 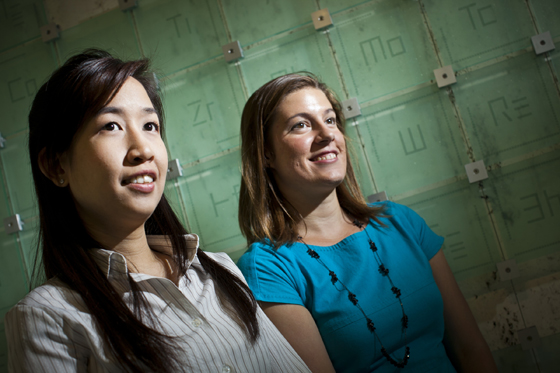 Tongjai Chookajorn, left, and Heather Murdoch, the lead authors of Science paper on the design and production of new stable nanocrystalline metal alloys with exceptional strength and other properties.
Photo: Dominick Reuter

Most metals — from the steel used to build bridges and skyscrapers to the copper and gold used to form wires in microchips — are made of crystals: orderly arrays of molecules forming a perfectly repeating pattern. In many cases, including the examples above, the material is made of tiny crystals packed closely together, rather than one large crystal. Indeed, for many purposes, making the crystals as small as possible provides significant advantages in performance, but such materials are often unstable: The crystals tend to merge and grow larger if subjected to heat or stress.

Now, MIT researchers have found a way to avoid that problem. They’ve designed and made alloys that form extremely tiny grains — called nanocrystals — that are only a few billionths of a meter across. These alloys retain their nanocrystalline structure even in the face of high heat. Such materials hold great promise for high-strength structural materials, among other potential uses.

The new findings, including both a theoretical basis for identifying specific alloys that can form nanocrystalline structures and details on the actual fabrication and testing of one such material, are described in a paper published Aug. 24 in Science.

Graduate student Tongjai Chookajorn, of MIT’s Department of Materials Science and Engineering (DMSE), guided the effort to design and synthesize a new class of tungsten alloys with stable nanocrystalline structures. Her fellow DMSE graduate student, Heather Murdoch, came up with the theoretical method for finding suitable combinations of metals and the proportions of each that would yield stable alloys. Chookajorn then successfully synthesized the material and demonstrated that it does, in fact, have the stability and properties that Murdoch’s theory predicted. They, along with their advisor Christopher Schuh, the Danae and Vasilis Salapatas Professor of Metallurgy and department head of DMSE, are co-authors of the paper.

For decades, researchers and the metals industry have tried to create alloys with ever-smaller crystalline grains, Schuh says. But, he adds, “nature does not like to do that. Nature tends to find low-energy states, and bigger crystals usually have lower energy.”

Looking for pairings with the potential to form stable nanocrystals, Murdoch studied many combinations of metals that are not found together naturally and have not been produced in the lab. “The conventional metallurgical approach to designing an alloy doesn’t think about grain boundaries,” Schuh explains, but rather focuses on whether the different metals can be made to mix together or not. But, he adds, it’s the grain boundaries that are crucial for creating stable nanocrystals. So Murdoch came up with a way of incorporating these grain boundary conditions into the team’s calculations.

Why go to the trouble of designing such materials? Because they can have properties that other, more conventional metals and alloys do not, the researchers say. For example, the alloy of tungsten and titanium that the MIT researchers developed and tested in this study is likely exceptionally strong, and could find applications in protection from impacts, guarding industrial or military machinery or for use in vehicular or personal armor. But the researchers stress that this fundamental research could lead to a wide range of potential uses. “This is one case study, but there are potentially hundreds of alloys we could make,” Schuh says.

Other nanocrystalline materials designed using these methods could have additional important qualities, such as exceptional resistance to corrosion, the team says. But finding materials that will remain stable with such tiny crystal grains, out of the nearly infinite number of possible combinations and proportions of the dozens of metallic elements, would be nearly impossible through trial and error. “We can calculate, for hundreds of alloys, which ones work, and which don’t,” Murdoch says.

The key to designing nanocrystalline alloys, they found, is “finding the systems where, when you add an alloying element, it goes to the grain boundaries and stabilizes them,” Schuh says, rather than distributing uniformly through the material. Under classical metallurgical theory, such a selective arrangement of materials is not expected to occur.

The tungsten-titanium material that Chookajorn synthesized, which has grains just 20 nanometers across, remained stable for a full week at a temperature of 1,100 degrees Celsius — a temperature consistent with processing techniques such as sintering, where powdered material is packed into a mold and heated to produce a solid shape. This means this alloy could easily become a practical material for a variety of applications where its high strength and impact resistance would be important, the researchers say.

Julia Weertman, a professor emerita of materials science and engineering at Northwestern University, says this work “represents a significant advancement toward the goal of creating nanocrystalline alloys that are usable at elevated temperatures.” She adds that “Schuh and his students, using thermodynamic considerations, derived a method to choose alloys that will remain stable at high temperatures. … This research opens up the use of microstructurally stable nanocrystalline alloys in high temperature applications, such as engines for aircraft or power generation.”

The work was funded by the U.S. Army Research Office.