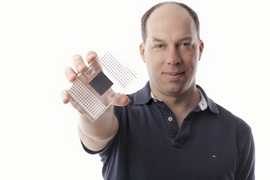 An adventurer at heart, Quake relishes in the adrenaline that comes from mountain biking and ski mountaineering. It is that same rush he gets from exploring the unknown that drives him to consistently push scientific limits. Quake is being recognized for his revolutionary work in drug discovery, genome analysis and personalized medicine. He will accept the prestigious award and present his accomplishments at MIT during the Lemelson-MIT Program's sixth-annual EurekaFest, a multi-day celebration of the inventive spirit, June 20-23.

Raised in an entrepreneurial household with a father who worked in the computer industry, Quake was captivated by technology and its infinite applications at an early age. Quake found academic success in his high school science and math courses, and went on to earn degrees in physics and mathematics from Stanford University and Oxford University. Today, the professor of bioengineering and applied physics at Stanford and investigator at the Howard Hughes Medical Institute has more than 80 patents and four companies to his name.

"Steve is a scientific pioneer with a compelling vision of future possibilities," said Gajus Worthington, president and CEO of Fluidigm Corporation, a company he co-founded with Quake. "He translates discoveries into inventions leading to new companies that are making significant advancements in human health."