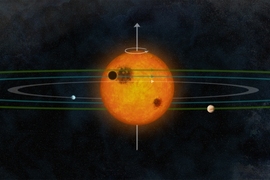 ↓ Download Image
Caption: In this artist interpretation, the planet Kepler-30c is transiting one of the large starspots that frequently appear on the surface of its host star. The authors used these spot-crossing events to show that the orbits of the three planets (color lines) are aligned with the rotation of the star (curly white arrow).
Credits: Graphic: Cristina Sanchis Ojeda

Credits:
Graphic: Cristina Sanchis Ojeda
Our solar system exhibits a remarkably orderly configuration: The eight planets orbit the sun much like runners on a track, circling in their respective lanes and always keeping within the same sprawling plane. In contrast, most exoplanets discovered in recent years — particularly the giants known as “hot Jupiters” — inhabit far more eccentric orbits.

Now researchers at MIT, the University of California at Santa Cruz and other institutions have detected the first exoplanetary system, 10,000 light-years away, with regularly aligned orbits similar to those in our solar system. At the center of this faraway system is Kepler-30, a star as bright and massive as the sun. After analyzing data from NASA’s Kepler space telescope, the MIT scientists and their colleagues discovered that the star — much like the sun — rotates around a vertical axis and its three planets have orbits that are all in the same plane.

In this artist interpretation, the planet Kepler-30c is transiting one of the large starspots that frequently appear on the surface of its host star. The authors used these spot-crossing events to show that the orbits of the three planets (color lines) are aligned with the rotation of the star (curly white arrow).
Graphic: Cristina Sanchis Ojeda

“In our solar system, the trajectory of the planets is parallel to the rotation of the sun, which shows they probably formed from a spinning disc,” says Roberto Sanchis-Ojeda, a physics graduate student at MIT who led the research effort. “In this system, we show that the same thing happens.”

Their findings, published today in the journal Nature, may help explain the origins of certain far-flung systems while shedding light on our own planetary neighborhood.

“It’s telling me that the solar system isn’t some fluke,” says Josh Winn, an associate professor of physics at MIT and a co-author on the paper. “The fact that the sun’s rotation is lined up with the planets’ orbits, that’s probably not some freak coincidence.”

Winn says the team’s discovery may back a recent theory of how hot Jupiters form. These giant bodies are named for their extremely close proximity to their white-hot stars, completing an orbit in mere hours or days. Hot Jupiters’ orbits are typically off-kilter, and scientists have thought that such misalignments might be a clue to their origins: Their orbits may have been knocked askew in the very early, volatile period of a planetary system’s formation, when several giant planets may have come close enough to scatter some planets out of the system while bringing others closer to their stars.

Spotting sunspots in a far-off sun

In order to resolve the puzzle, Sanchis-Ojeda looked through data from the Kepler space telescope, an instrument that monitors 150,000 stars for signs of distant planets. He narrowed in on Kepler-30, a non-hot Jupiter system with three planets, all with much longer orbits than a typical hot Jupiter. To measure the alignment of the star, Sanchis-Ojeda tracked its sunspots, dark splotches on the surface of bright stars like the sun.

“These little black blotches march across the star as it rotates,” Winn says. “If we could make an image, that’d be great, because you’d see exactly how the star is oriented just by tracking these spots.”

But stars like Kepler-30 are extremely far away, so capturing an image of them is almost impossible: The only way to document such stars is by measuring the small amount of light they give off. So the team looked for ways to track sunspots using the light of these stars. Each time a planet transits — or crosses in front of — such a star, it blocks a bit of starlight, which astronomers see as a dip in light intensity. If a planet crosses a dark sunspot, the amount of light blocked decreases, creating a blip in the data dip.

“If you get a blip of a sunspot, then the next time the planet comes around, the same spot might have moved over here, and you’d see the blip not here but there,” Winn says. “So the timing of these blips is what we use to determine the alignment of the star.”

From the data blips, Sanchis-Ojeda concluded that Kepler-30 rotates along an axis perpendicular to the orbital plane of its largest planet. The researchers then determined the alignment of the planets’ orbits by studying the gravitational effects of one planet on another. By measuring the timing variations of planets as they transit the star, the team derived their respective orbital configurations, and found that all three planets are aligned along the same plane. The overall planetary structure, Sanchis-Ojeda found, looks much like our solar system.

James Lloyd, an assistant professor of astronomy at Cornell University who was not involved in this research, says that studying planetary orbits may shed light on how life evolved in the universe — since in order to have a stable climate suitable for life, a planet needs to be in a stable orbit. “In order to understand how common life is in the universe, ultimately we will need to understand how common stable planetary systems are,” Lloyd says. “We may find clues in extrasolar planetary systems to help understand the puzzles of the solar system, and vice versa.”

The findings from this first study of the alignment of a non-hot Jupiter system suggest that hot Jupiter systems may indeed form via planetary scattering. To know for sure, Winn says he and his colleagues plan to measure the orbits of other far-off solar systems.

“We’ve been hungry for one like this, where it’s not exactly like the solar system, but at least it’s more normal, where the planets and the star are aligned with each other,” Winn says. “It’s the first case where we can say that, besides the solar system.”

Several of the winning innovations apply artificial intelligence to solutions for challenges to national security.