Newfound exoplanet may turn to dust 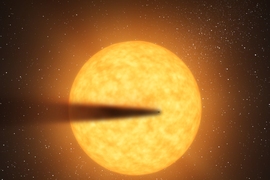 Credits:
Image: NASA
Researchers at MIT, NASA and elsewhere have detected a possible planet, some 1,500 light years away, that appears to be evaporating under the blistering heat of its parent star. The scientists infer that a long tail of debris — much like the tail of a comet — is following the planet, and that this tail may tell the story of the planet’s disintegration. According to the team’s calculations, the tiny exoplanet, not much larger than Mercury, will completely disintegrate within 100 million years.

The team found that the dusty planet circles its parent star every 15 hours — one of the shortest planet orbits ever observed. Such a short orbit must be very tight and implies that the planet must be heated by its orange-hot parent star to a temperature of about 3,600 degrees Fahrenheit. Researchers hypothesize that rocky material at the surface of the planet melts and evaporates at such high temperatures, forming a wind that carries both gas and dust into space. Dense clouds of the dust trail the planet as it speeds around its star.

“We think this dust is made up of submicron-sized particles,” says co-author Saul Rappaport, a professor emeritus of physics at MIT. “It would be like looking through a Los Angeles smog.”

The group’s findings, published in the Astrophysical Journal, are based on data from the Kepler Observatory, a space-based telescope that surveys more than 160,000 stars in the Milky Way. The observatory records the brightness of each star at regular intervals; scientists then analyze the data for signs of new planets outside our own solar system.

Astronomers using the Kepler satellite typically identify exoplanets by looking for regular dips in a star’s brightness. For example, if a star dims every month, one possibility is that the dimming is due to a planet that travels around the star over the course of a month; each time the planet travels in front of the star, the planet blocks the same small amount of light.

However, Rappaport and his colleagues came across a curious light pattern from a star dubbed KIC 12557548. The group examined the star’s light curves, a graph of its brightness over time, and found that its light dropped by different intensities every 15 hours — suggesting that something was blocking the star regularly, but by varying degrees.

The team considered several explanations for the puzzling data, including the possibility that a planetary duo — two planets orbiting each other — also orbited the star. (Rappaport reasoned that the planetary pair would pass by the star at different orientations, blocking out different amounts of light during each eclipse.) In the end, the data failed to support this hypothesis: The dimming every 15 hours was judged far too short a period to allow sufficient room for two planetary bodies orbiting each other, in the same way that Earth and the moon together orbit the sun.

Instead, the researchers landed on a novel hypothesis: that the varying intensities of light were caused by a somewhat amorphous, shape-shifting body.

“I’m not sure how we came to this epiphany,” Rappaport says. “But it had to be something that was fundamentally changing. It was not a solid body, but rather, dust coming off the planet.”

Rappaport and his colleagues investigated various ways in which dust could be created and blown off a planet. They reasoned that the planet must have a low gravitational field, much like that of Mercury, in order for gas and dust to escape from the planet’s gravitational pull. The planet must also be extremely hot — on the order of 3,600° F.

Rappaport says there are two possible explanations for how the planetary dust might form: It might erupt as ash from surface volcanoes, or it could form from metals that are vaporized by high temperatures and then condense into dust. As for how much dust is spewed from the planet, the team showed that the planet could lose enough dust to explain the Kepler data. From their calculations, the researchers concluded that at such a rate, the planet will completely disintegrate within 100 million years.

The researchers created a model of the planet orbiting its star, along with its long, trailing cloud of dust. The dust was densest immediately surrounding the planet, thinning out as it trailed away. The group simulated the star’s brightness as the planet and its dust cloud passed by, and found that the light patterns matched the irregular light curves taken from the Kepler Observatory.

“We’re actually now very happy about the asymmetry in the eclipse profile,” Rappaport says. “At first we didn’t understand this picture. But once we developed this theory, we realized this dust tail has to be here. If it’s not, this picture is wrong.”

Dan Fabrycky, a member of the Kepler Observatory science team, says the model may add to the many different ways in which a planet can disappear.

“This might be another way in which planets are eventually doomed,” says Fabrycky, who was not involved in the research. “A lot of research has come to the conclusion that planets are not eternal objects, they can die extraordinary deaths, and this might be a case where the planet might evaporate entirely in the future.”

The research was funded by the National Science Foundation and the Natural Sciences and Engineering Research Council of Canada.