The power of being heard 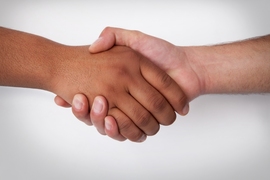 To help promote peace in the Middle East, many organizations have established “peace camps” or similar conflict-resolution programs that bring Israelis and Palestinians together to foster greater understanding of the opposing group.

One common feature of such programs is the opportunity for members of each group to share stories about their lives with members of the other group. Now, a new study from MIT neuroscientists shows that the benefits from this exchange are much greater when members of the less empowered group share their stories with the traditionally dominant group than when the reverse occurs.

The finding, published online in the Journal of Experimental Social Psychology, supports the idea that for the disempowered group, the biggest barrier to reconciliation is the belief that their concerns are being ignored, says Rebecca Saxe, senior author of the study.

“If that sense of being neglected and disregarded and taken advantage of is the biggest obstacle to progress, from their perspective, then you can partly address that by providing an experience of being heard,” says Saxe, an associate professor of brain and cognitive sciences and associate member of the McGovern Institute for Brain Research at MIT.

The researchers found the same phenomenon in a similar study of Mexican immigrants and white Arizonans, which is also described in the new paper.

Many previous studies have documented the benefits of “perspective taking” — that is, making an effort to understand another person’s experiences and point of view. However, this is the first study to look at the other side of that exchange, which lead author Emile Bruneau dubbed “perspective giving” — the opportunity to share one’s own story with someone else.

Bruneau, an MIT postdoc who volunteered as a counselor at peace camps in Northern Ireland before earning his PhD, says interviews with camp participants suggested to him that the less empowered group would benefit more from perspective giving than perspective taking.

To test this hypothesis, Palestinians and Israelis, and Mexican immigrants and white Arizonans, were recruited for what they were told was a study of an online translation system. The Arizona study took place six months after the passage of a controversial anti-immigration bill, while the Middle East study was conducted six months after the 2009 Israeli military action in Gaza, when hope for a peace agreement was very low.

Each participant was assigned to write about the difficulties of life in their society, or to read and summarize such an essay written by a member of the opposing group. All interactions took place through video and text-based chat. Each participant was paired with someone who, unbeknownst to the subject, was actually a research assistant.

When members of the less powerful group simply wrote their stories without having anyone from the opposing group read them, this did not boost their attitudes towards the other group — reinforcing the importance of being heard.

For the dominant group, the researchers believe that hearing the opposing group’s stories is beneficial because members of the group in power often fear being blamed for the conflict. Therefore, listening gives “an opportunity for them to act virtuously and morally and to show that they’re actually good people,” Saxe says.

However, the researchers do not recommend adopting a one-sided approach in which the disempowered group does all the talking. Instead, they believe their findings suggest it is important to ensure that both groups speak equally; studies of dialogue programs have shown that the dominant group often ends up doing more of the talking. The researchers believe it could also help for members of the disempowered group to speak first, priming both groups to be more receptive to the unity-building activities that follow.

Peter Coleman, director of the International Center for Cooperation and Conflict Resolution at Columbia University, says the study offers valuable insight into what happens on both sides of dialogue situations. “This is good experimental research on an issue that’s important to practitioners” of dialogue programs, he says.

When the researchers questioned the subjects again a week after the initial exchange, they found that attitudes had reverted to pre-experiment levels. “We didn’t expect that the effects of a 15-minute intervention with Palestinians and Israelis would last very long,” Bruneau says. “But of course what we’re interested in is improving relationships between groups in conflict. To really do that, you need to know the long-term effects of an intervention that you’re trying to employ.”

That’s a question that Saxe and Bruneau are now trying to address by studying which types of attitude changes are most likely to last during a conflict. For example, a program that decreases the perception that the other side is biased and irrational might prove more successful than one designed to improve trust, Bruneau says.

“There are all kinds of different things that could change, including prejudice, trust, empathy and commitment to collective action. Trying to understand which of these are desirable, which of these are meaningful, I think is really important,” he says.

To help with that effort, Saxe and Bruneau are also investigating the use of brain-scanning techniques such as fMRI to determine whether conflict-resolution programs have any measurable impact on brain activity. As the first step in that program, they reported in January that brain regions that respond to emotional suffering overlap with those involved with the ability to perceive what another person is thinking.