How to control complex networks 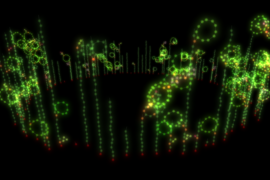 ↓ Download Image
Caption: MIT and Northeastern University researchers devised a computer algorithm that can generate a controllability structure for any complex network. The red points are 'driver nodes,' which can control the rest of the nodes (green).
Credits: Image: Mauro Martino 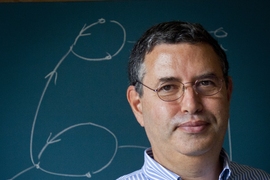 At first glance, a diagram of the complex network of genes that regulate cellular metabolism might seem hopelessly complex, and efforts to control such a system futile.

However, an MIT researcher has come up with a new computational model that can analyze any type of complex network — biological, social or electronic — and reveal the critical points that can be used to control the entire system.

Potential applications of this work, which appears as the cover story in the May 12 issue of Nature, include reprogramming adult cells and identifying new drug targets, says study author Jean-Jacques Slotine, an MIT professor of mechanical engineering and brain and cognitive sciences. 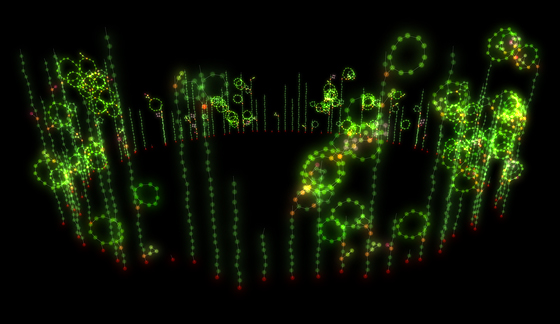 MIT and Northeastern University researchers devised a computer algorithm that can generate a controllability structure for any complex network. The red points are 'driver nodes,' which can control the rest of the nodes (green).
Image: Mauro Martino
Slotine and his co-authors applied their model to dozens of real-life networks, including cell-phone networks, social networks, the networks that control gene expression in cells and the neuronal network of the C. elegans worm. For each, they calculated the percentage of points that need to be controlled in order to gain control of the entire system.

For sparse networks such as gene regulatory networks, they found the number is high, around 80 percent. For dense networks — such as neuronal networks — it’s more like 10 percent.

The paper, a collaboration with Albert-Laszlo Barabasi and Yang-Yu Liu of Northeastern University, builds on more than half a century of research in the field of control theory.

Control theory — the study of how to govern the behavior of dynamic systems — has guided the development of airplanes, robots, cars and electronics. The principles of control theory allow engineers to design feedback loops that monitor input and output of a system and adjust accordingly. One example is the cruise control system in a car.

However, while commonly used in engineering, control theory has been applied only intermittently to complex, self-assembling networks such as living cells or the Internet, Slotine says. Control research on large networks has been concerned mostly with questions of synchronization, he says. 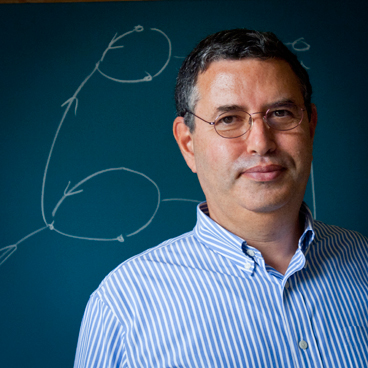 Jean-Jacques Slotine
Photo: Patrick Gillooly
In the past 10 years, researchers have learned a great deal about the organization of such networks, in particular their topology — the patterns of connections between different points, or nodes, in the network. Slotine and his colleagues applied traditional control theory to these recent advances, devising a new model for controlling complex, self-assembling networks.

“The area of control of networks is a very important one, and although much work has been done in this area, there are a number of open problems of outstanding practical significance,” says Adilson Motter, associate professor of physics at Northwestern University. The biggest contribution of the paper by Slotine and his colleagues is to identify the type of nodes that need to be targeted in order to control complex networks, says Motter, who was not involved with this research.

The researchers started by devising a new computer algorithm to determine how many nodes in a particular network need to be controlled in order to gain control of the entire network. (Examples of nodes include members of a social network, or single neurons in the brain.)

“The obvious answer is to put input to all of the nodes of the network, and you can, but that’s a silly answer,” Slotine says. “The question is how to find a much smaller set of nodes that allows you to do that.”

There are other algorithms that can answer this question, but most of them take far too long — years, even. The new algorithm quickly tells you both how many points need to be controlled, and where those points — known as “driver nodes” — are located.

Next, the researchers figured out what determines the number of driver nodes, which is unique to each network. They found that the number depends on a property called “degree distribution,” which describes the number of connections per node.

A higher average degree (meaning the points are densely connected) means fewer nodes are needed to control the entire network. Sparse networks, which have fewer connections, are more difficult to control, as are networks where the node degrees are highly variable.

In future work, Slotine and his collaborators plan to delve further into biological networks, such as those governing metabolism. Figuring out how bacterial metabolic networks are controlled could help biologists identify new targets for antibiotics by determining which points in the network are the most vulnerable.