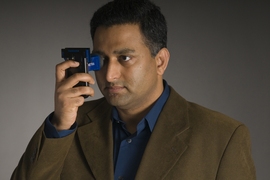 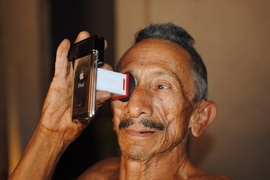 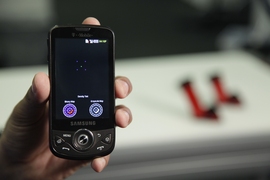 ↓ Download Image
Caption: The results screen on the smartphone showing maps for position and size of the cataract, on screen left, and density of each section, on screen right. At top is the pattern of five colored dots that is fed into the clip-on device (removed in this picture) to perform the actual cataract test.
Credits: Photo: Jonathan Williams

Caption:
The results screen on the smartphone showing maps for position and size of the cataract, on screen left, and density of each section, on screen right. At top is the pattern of five colored dots that is fed into the clip-on device (removed in this picture) to perform the actual cataract test.
Credits:
Photo: Jonathan Williams
Cataracts are the leading cause of preventable blindness worldwide. But the standard test to detect the cloudy patches in the eye’s lens requires a $5,000 piece of equipment called a slit lamp, and a trained physician to interpret its results — two things that are often not available in rural and less-affluent parts of the world. But a team of MIT researchers has now developed a simple device that can clip onto an ordinary smartphone (or smart device such as an iPod) and provide a diagnosis of cataracts within a few minutes.

Ramesh Raskar, the NEC Career Development Associate Professor of Computer and Communications and director of the MIT Media Lab’s Camera Culture group, says, “I like to think of this as a radar for the human eye.” Just as a weather radar beam sweeps across the sky to detect clouds, the new system — dubbed Catra — sweeps a beam of light across the eye to detect the cloudy patches called cataracts.

While the standard test for cataracts in an ophthalmologist’s office assigns a score on a scale of 1 to 4 — from no cataracts to completely blocked vision — the new, inexpensive test actually provides much more information. Media Lab graduate student Vitor Pamplona, a member of the team developing Catra, explains that it “scans the lens of the eye and creates a map showing position, size, shape and density of cataracts.”

At the moment, that’s more information than doctors need, Raskar acknowledges, since they’re essentially faced with a binary decision: whether or not to surgically remove the lens. But he notes a possible similarity to the evolution of devices to measure the eye’s refractive errors — the information needed for a prescription for corrective lenses. Decades ago, a new test was developed that could map local variations in the eye’s refraction, giving far more information than the three numbers needed for a simple prescription. Initially, there was no therapeutic value in the added information, but with the advent of Lasik laser eye surgery, the detailed refraction map of the lens later became important.

At some point in the future new cataract therapies may similarly treat specific areas of cloudiness, rather than removing the whole lens. But in the meantime, Catra could provide great value as a simple and low-cost way of making the initial diagnosis that cataracts are present, especially in parts of the developing world where such services are now rare and often require travel to distant cities.

In addition, the new device may be able to detect cataracts at an earlier stage than existing tests, because it can pick up changes in parts of the lens that have not yet become opaque. The current test depends on light reflected back by the lens, to be seen by the doctor performing the test, while Catra relies on light passing through the lens as reported by the patient, who just has to indicate whether a point of light remains steady, dims or disappears.

“We turned the problem around,” Raskar says. “Instead of asking the doctor, we ask the patient.”

As the device scans a beam of light across the eye, it uses rays that are perfectly aligned so that the eye’s lens focuses all the beams to the same point on the fovea, the area of the retina where it has maximum resolution. So even though the beam is moving, to the patient it appears as a single stationary point, which sometimes blurs or disappears if cataracts are present.

The Media Lab LabCast #55: Catra. Watch more videos on the Catra site.
The new screening tool will be presented at the annual computer-graphics conference SIGGRAPH, being held Aug. 7-11 in Vancouver. The new work is a follow-up to the team’s earlier development of a system, called NETRA, that uses a smartphone with a different clip-on attachment to measure refractive errors of the eye. These two devices recently won a $300,000 first prize from Vodaphone Foundation in a contest for innovations related to mobile phones. The systems also won prizes in MIT’s IDEAS and Global Challenge contests, and were recently featured in the TEDxBoston event.

"Together, NETRA and Catra may become extremely valuable tools for screening patients that need eye-care assistance, especially in regions where eye doctors are not readily available," says Manuel M. Oliveira, a visiting professor from Brazil's Universidade Federal do Rio Grande do Sul and a member of the team. In addition to Raskar, Pamplona and Oliveira, the work was carried out by Media Lab students Erick Passos, Jan Zizka and Everett Lawson; and Esteban Clua, a professor at UFF in Brazil.

Already, in preliminary testing with 22 subjects, Catra discovered cataracts in one previously undiagnosed subject who’d had an eye test in a doctor’s office a few months prior. The detection was later confirmed in a follow-up test using standard methods.

Joseph Ciolino, an ophthalmologist at the Massachusetts Eye and Ear Infirmary and Harvard Medical School, says the need for such a device is great: “Cataracts are the leading cause of blindness worldwide and a large problem in the developing world. Since the blindness can be treated by surgically removing the cataract, the diagnosis is important, and patients may not know that they have a treatable condition. If they can be accurately diagnosed, then they are more likely to seek treatment,” he says.

Today, there are 250 million people in the world who are blind because of preventable causes. An inexpensive, portable device such as Catra, Raskar says, might help make a serious dent in that number.