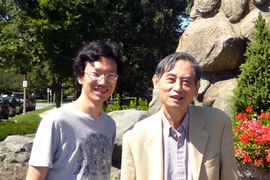 Caption:
Researchers Yang Zhang and Sow-Hsin Chen.
Credits:
Photo courtesy of the researchers
We drink it, swim in it, and our bodies are largely made of it. But as ubiquitous as water is, there is much that science still doesn't understand about this life-sustaining substance.

For example, unlike almost all other compounds, which typically shrink as they get colder, water expands when it freezes — which is why ice floats on water. Yet even the reasons for this unusual fundamental property remain elusive.

Now an MIT doctoral student and a team of researchers have carried out new experiments supporting a controversial theory about water's behavior that could help explain some of its mysteries.

Their findings, recently published in the Proceedings of the National Academy of Sciences, could have important implications for fields ranging from biology to construction, the researchers say, because the behavior of water affects so many important processes.

In this video clip, Yang Zhang PhD '10 demonstrates supercooled water, a key aspect of this research. An ordinary bottle of spring water was kept in the freezer overnight. Because it was kept still, the water reached a temperature well below the freezing point, but the water didn't freeze because it had no nucleation centers — such as ice crystals, bubbles or ripples — to start the freezing process. Then, when the bottle is subjected to a sudden impact, the shock wave causes almost all of the water to freeze instantly.
Video: Yang Zhang

Water is "probably the most weird substance on Earth," says Yang Zhang PhD '10, lead author of the PNAS paper, which was based on his doctoral thesis research. "It behaves very differently from other materials," he says, with scores of anomalous characteristics. The work was done in collaboration with Zhang's doctoral supervisor, Sow-Hsin Chen, professor in MIT's Department of Nuclear Science and Engineering, and six other co-authors.

All materials undergo phase transitions between the basic states of matter — solid, liquid and gas. At these transitions, a material's properties can change significantly and suddenly. A theory proposed about two decades ago explained some of water's odd behavior by suggesting that a similar transition may take place between two different liquid states, in which the arrangement of the water molecules changes so that the two states have very different densities.

The new research, which probed water's molecular structure under a wide range of pressures and temperatures, provided some evidence for the existence of this liquid-liquid transition, though the evidence falls short of proof.

Evidence for this posited transition has been very difficult to obtain because it occurs only at temperatures and pressures at which water normally could not exist in liquid form: For instance, the temperature at which the liquid-liquid transition may occur lies far below the normal freezing point, at about minus 60 degrees Celsius. So the researchers had to find a clever way to get around that limitation.

One key trick: the use of tiny tubes of silica, in which the molecules of water were tightly confined so that they were unable to crystallize into ice. This tight confinement made it possible to maintain water in liquid form far below its normal freezing point.

With the water molecules in this state, Zhang, now the Clifford G. Shull Fellow at Oak Ridge National Laboratory, was able to probe their density using a neutron beam from a reactor at the National Institute of Standards and Technology. In the experiments, he gradually varied the pressure from normal sea-level atmospheric pressure (or 1 bar) up to about 3,000 times that amount, and varied the temperature over a range of 170 degrees Celsius. He found a difference in water's density by approaching the expected transition temperature from opposite directions, as predicted by the theory.

Pablo Debenedetti, a professor of engineering and applied science at Princeton University who was not involved in this research, says "these are beautiful experiments" that address "one of the most interesting open questions on the liquid state of matter, and in particular on water: the possible existence of a phase transition between two distinct phases of liquid water."

While the experiments support the theory, he says, interpretation is complicated because confined water might behave differently from water in bulk. "The theoretical tools needed to unambiguously relate observations in nanoscale confinement to the behavior of bulk water are not available at present," he says.

"Supercooled" water that remains liquid below the normal freezing point is relatively easy to produce; Zhang even filmed a short demonstration using an ordinary water bottle cooled in the refrigerator. Water can also be "superheated" in a microwave oven to well above the boiling point, flashing to a boil all at once only when it is disturbed in some way. (In both freezing and boiling, water usually needs a nucleation point, such as a bubble or a ripple, to trigger the change of phase.)

Because water is key to so many aspects of people's lives, these phenomena could have important consequences. For example, Chen delivered a keynote speech this July, at a conference on low-temperature agriculture, on the possible impact of these supercooled states on plant life. He believes the fact that living organisms apparently cannot be revived after being subjected to temperatures below about minus 45 C is explained by water's transition to a lower-density state that prevents proteins, the molecules on which living organisms are built, from functioning.

This density difference could also affect construction, because concrete contains tiny amounts of water that can cause buildings and roads in polar regions to suffer serious cracking when temperatures plunge below minus 45 C. If the theory is correct, this critical temperature could set a fundamental limitation for both organisms and concrete buildings.

"The building blocks of our bodies and the building blocks of our society," Zhang says, "both have a lower limit of temperature that is based on the properties of water." But by understanding those limits, he says, it might be possible to alter the water — for example, by dissolving certain chemicals in it — to change the transition points and lower that limit.