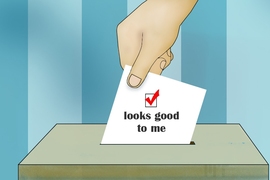 The looks of political candidates are a key factor influencing voters, a phenomenon identified by a number of scholars in recent years. Now, a new study by MIT political scientists adds to this body of research by detailing which types of citizens are most influenced by candidate appearances, and why: The tendency is most prevalent among low-information voters who watch a lot of television.

Using data from the 2006 U.S. Senate and governors’ races, the study shows that for every 10-point increase in the advantage a candidate has when rated by voters on his or her looks, there will be a nearly 5 percent increase in the vote for that candidate by the uninformed voters who are most firmly planted on their couches. Yet that same advantage in looks is worth only about a 1 percent increase among low-information voters who watch little television.

“It’s not that this effect influences all voters exactly the same way,” says Chappell Lawson, an associate professor of political science at MIT and a co-author of the study. “Voters who watch a lot of television but don’t really know much about the candidates, besides how they look, are particularly susceptible.”

Lawson and Gabriel Lenz — who worked on the study as an associate professor of political science at MIT and is now at the University of California, Berkeley — detail the results in a new paper, “Looking the Part: Television Leads Less Informed Citizens to Vote Based on Candidates’ Appearance,” published this month in the American Journal of Political Science.

As seen on TV

To conduct the study, Lawson and Lenz used data from two 2006 surveys of American voters. One survey, the 2006 Cooperative Congressional Election Study (CCES), sampled 36,500 citizens about their voting choices, levels of knowledge and television-watching habits, among other things. Another study, headed by Princeton University psychology professor Alex Todorov, asked voters to choose, based solely on appearances, which candidates seemed more competent in 64 U.S. Senate and gubernatorial races held in 2006.

Knowing which candidate in each race had a general advantage based on appearances, the researchers could drill into the CCES data and estimate how much more that advantage affected low-information voters. Among those voters in particular, Lawson and Lenz suggest, the copious amounts of television they watch means their ballot-box choices are heavily influenced by what they see onscreen.

Overall, the appearance advantage among low-information voters translates into a substantial edge at the ballot box: “The size of the effect is roughly equivalent to the influence of incumbency,” Lawson says.

“It’s amazing how consistent this pattern is,” Lenz says.

This new finding adds to a burgeoning area of study for social scientists. In looking at candidate appearances, researchers have found a variety of nuances in voters’ stated preferences and Election Day actions. Female political candidates, for instance, tend to fare better in surveys about their appearances than at the polls.

“Most female candidates fare relatively better when we ask people to rate the faces, but then generally underperform their male counterparts in actual elections,” Lenz notes.

What makes candidates appear competent also seems to transcend cultural boundaries. In one past study, Lawson and Lenz have observed that voters in Brazil, India and the United States all have similar ideas about what a successful politician looks like.

For his part, Todorov — the Princeton professor who gathered the data from the 2006 elections — calls the MIT researchers’ latest result “one of best [studies] that has followed up my lab’s initial findings,” adding: “Lawson and Lenz have provided the best evidence for a potential causal mechanism of effects of appearance on voting decisions.”

That is, social scientists are still concerned with showing the relationship between looks and votes is causal, and not a mere correlation. As Lenz notes, it could be the case that “harder-working candidates who win more votes [also] do a better job with image management,” among other facets of a campaign.

However, as Lawson says, “If people were really voting for other qualities that just happen to correlate with appearance, we would expect the high-knowledge voters to be at least as susceptible.”

The results, notes Lenz, also emphasize the need for interested parties to find constructive ways of reaching and engaging voters. “The broader policy implication is that we’re asking voters to make really difficult decisions in these races,” Lenz says. “And we’re not making readily available the information many of them need to make those decisions.”