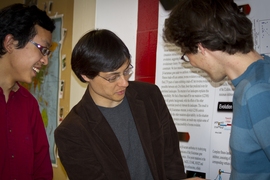 Caption:
Assistant physics professor Jeff Gore, center, and undergraduates Longzhi Tan, left, and Stephen Serene worked out a computational model to predict how likely it is that genetic adaptations can reverse themselves.
Credits:
Photo: Melanie Gonick
Ever since Charles Darwin proposed his theory of evolution in 1859, scientists have wondered whether evolutionary adaptations can be reversed.

Answering that question has proved difficult, partly due to conflicting evidence. In 2003, scientists showed that some species of insects have gained, lost and regained wings over millions of years. But a few years later, a different team found that a protein that helps control cells’ stress responses could not evolve back to its original form.

Jeff Gore, assistant professor of physics at MIT, says the critical question to ask is not whether evolution is reversible, but under what circumstances it could be. “It’s known that evolution can be irreversible. And we know that it’s possible to reverse evolution in some cases. So what you really want to know is: What fraction of the time is evolution reversible?” he says.

By combining a computational model with experiments on the evolution of drug resistance in bacteria, Gore and his students have, for the first time, calculated the likelihood of a particular evolutionary adaptation reversing itself.

They found that a very small percentage of evolutionary adaptations in a drug-resistance gene can be reversed, but only if the adaptations involve fewer than four discrete genetic mutations. The findings will appear in the May 13 issue of the journal Physical Review Letters. Lead authors of the paper are two MIT juniors, Longzhi Tan and Stephen Serene.

Gore and his students used an experimental model system developed by researchers at Harvard University to study the evolution of a gene conferring resistance to the antibiotic cefotaxime in bacteria.

The Harvard team identified five mutations that are crucial to gaining resistance to the drug. Bacteria that have all five mutations are the most resistant, while bacteria with none are very susceptible to the drug. Susceptible bacteria can evolve toward resistance by gaining each of the five mutations, but they can’t be acquired in any old order. That’s because evolution can only proceed along a given path if each mutation along the way offers a survival advantage.

Scientists study these paths by creating a “fitness landscape”: a diagram of possible genetic states for a particular gene, and each state’s relative fitness in a given environment. There are 120 possible paths through which bacteria with zero mutations could accumulate all five, but the Harvard team found that only 18 could ever actually occur.

The MIT team built on that study by asking whether bacteria could evolve resistance to cefotaxime but then lose it if they were placed in a new environment in which resistance to the original drug hindered their ability to survive.

Genetic states that differ by only one mutation are always reversible if one state is more fit in one environment and the other is more fit in the other. The MIT researchers were able to study how the possibility of reversal decreases as the number of mutations between the two states increased.

“This is the first case where anyone’s been able to say anything about how reversibility behaves as a function of distance,” Gore says. “What we see in our system is that once the system gets four mutations, it’s unable to get back to where it started.”

Daniel Weinreich, assistant professor of biology at Brown University, says the study’s most important contribution is its analysis of the reversibility between every possible intermediate state in the fitness landscape.

“What Jeff has done is show that there’s another layer of mathematical complexity that enters when you ask questions about reversing environmental pressure,” says Weinreich, who was not involved in this research.

In the late 19th century, paleontologist Louis Dollo argued that evolution could not retrace its steps to reverse complex adaptations — a hypothesis known as Dollo’s law of irreversibility. Gore says his team’s results offer support for Dollo’s law, but with some qualifications.

The study also helps explain why organs no longer needed, such as the human appendix, do not readily disappear. “You can only ever really think about evolution reversing itself if there is a cost associated with the adaptation,” Gore says. “For example, with the appendix, it may just be that the cost is very small, in which case there’s no selective pressure to get rid of it.”

In a follow-up study, the researchers are looking at how the rate of environmental change affects the reversibility of evolution. In the Physical Review Letters study, they assumed an immediate switch between two environments, but they believe that more gradual changes might alter the rate of reversal.