Now that an Earthlike planet has been discovered, the key to confirming that it can host life will be to study its atmosphere in detail
Morgan Bettex, MIT News Office
Publication Date:

Caption:
For the past 15 years, Sara Seager, the Ellen Swallow Richards Professor of Planetary Science in MIT’s Department of Earth, Atmospheric and Planetary Sciences and professor in MIT’s Department of Physics, has been studying exoplanet atmospheres and interiors.
Credits:
Photo: Patrick Gillooly
The possibility of discovering a planet that is small, cool, rocky, orbiting a sunlike star and able to host life — an Earth twin, in other words — has made the search for planets outside of our solar system, or exoplanets, one of the hottest research areas in physical science. This three-part series explores MIT researchers’ roles in the quest to find an Earth twin and the effort to make sense of the 500 exoplanets that have been discovered since 1995.

Although Gliese 581g is the most Earthlike planet to be discovered to date, it’s unclear whether the planet is habitable. Just because the planet is relatively similar in mass to Earth doesn’t mean it can host life. Although Earth and Venus are about the same mass and size, the surface of Venus is too unbearably hot for life to survive there.

In fact, the hardest part about the quest to find life elsewhere in the universe may be confirming whether an Earth-sized planet is habitable. The only way to find that out is by studying the planet’s atmosphere, an area of research that Sara Seager, the Ellen Swallow Richards Professor of Planetary Science in MIT’s Department of Earth, Atmospheric and Planetary Sciences and professor of physics, has pioneered over the past 15 years. Although Seager has mostly studied the atmospheres of massive exoplanets known as “hot Jupiters,” which are too hot and gaseous to host life, she considers these observations as valuable practice for studying smaller exoplanets. 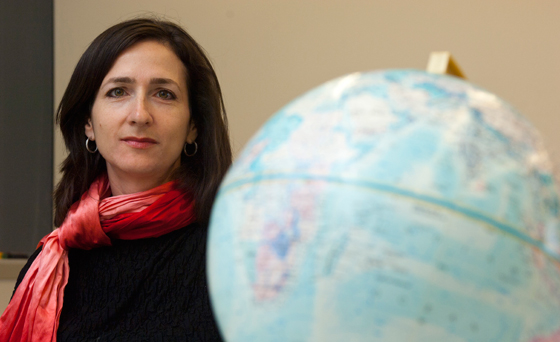 For the past 15 years, Sara Seager, the Ellen Swallow Richards Professor of Planetary Science in MIT’s Department of Earth, Atmospheric and Planetary Sciences and professor in MIT’s Department of Physics, has been studying exoplanet atmospheres and interiors.
Photo: Patrick Gillooly
“We are just testing the waters, because we are only now getting the data and practicing how to interpret that data,” Seager explains of studying super-Earths, or planets that are up to 10 times the mass of Earth. “I look to these planets as practice cases for when we find the Earths, which is important, because a lot of the time with exoplanets, things are different from what you’d expect,” she says. In fact, despite all the excitement surrounding the discovery of Gliese 581g, Seager doesn’t believe this is a good planet for follow-up observations because there is significant uncertainty about its density, composition and atmosphere.

Studying the atmospheres of Earth candidates like Gliese 581g is expected to be challenging in part because these planets have thin atmospheres, and current telescope technology may not enable researchers to collect enough detailed data to confirm signs of life, according to a paper that Seager co-authored and that was published in September in the Annual Reviews of Astronomy and Astrophysics. Despite this limitation, Seager is trying to learn as much as possible about recently discovered midsized planets with the hope that this knowledge will lead to better observational techniques for studying Earthlike exoplanets that are even smaller than Gliese 581g.

During the 1990s, researchers didn’t think it would be possible to study the atmospheres of the hot Jupiters that they were beginning to discover. But that changed in 2002, when the Hubble Space Telescope detected an exoplanet’s atmosphere as it transited, or passed in front of its host star. During a transit, the molecules in a planet’s atmosphere absorb some of the starlight that passes through the atmosphere. Researchers can identify those molecules by studying the changes in the spectrum, or rainbow of colors emitted in the light that radiates from the star’s electromagnetic waves. Because lab experiments have determined what kinds of molecules are absorbed at certain wavelengths, scientists study spectra patterns to pinpoint the types of molecules that may exist in a planet’s atmosphere. They can also learn how much heat an exoplanet radiates and absorbs by observing it as it passes behind its host star, an event known as an occultation.

As researchers began to collect data from these events, they started to develop computer models to interpret the data. Seager and former MIT postdoctoral researcher Nikku Madhusudhan pioneered the so-called “million-model approach,” a technique that uses computer programs to combine variables, such as a planet's temperature throughout its atmosphere, with different amounts of the most stable and prominent molecules that exist in planetary atmospheres, including methane and water vapor. The programs then analyze millions of combinations of these variables to find a range that most closely matches the data. This allows researchers to determine the most likely composition of the atmosphere.

Seager’s technique has allowed researchers to characterize the atmospheres of dozens of hot Jupiters to date. In addition to identifying the molecules that make up those atmospheres, they have learned the temperature of these planets’ day and night sides, and how those temperatures change at different altitudes. Most recently, Seager, Madhusudhan and their colleagues studied the atmosphere of GJ 436b, an exo-Neptune, and found that it didn’t contain the high levels of methane that scientists expected for a planet with its temperature.

Seager is also working with Leslie Rogers, a graduate student in MIT’s Department of Physics, to explore the range of pressures and temperatures that would enable liquid water — a requirement for all life on Earth — to exist inside a planet or on its surface. By pinpointing the variables that are most important for liquid water to exist, such as the distance between a planet and its host star, Seager and Rogers hope to develop more realistic models to study Earth candidates.

But it remains to be seen whether there will be enough decent data to plug into such models, according to Drake Deming, a senior scientist at NASA’s Goddard Space Flight System, who says that even though Seager’s technique has been useful for interpreting hot Jupiters, the approach requires extremely high-quality data. The James Webb Space Telescope, scheduled to be deployed in 2014, is expected to more easily obtain better data of exoplanet atmospheres, but Drake says it’s likely that the telescope won’t be sensitive enough to study Earthlike planets. He estimates that confirming the existence of a true Earth twin could “take years, probably decades, because we don’t have the techniques or the technology to do so.”

The bacteria GFAJ-1, shown here, can thrive on arsenic — a discovery that upends long-held assumptions about the basis of life here on Earth and elsewhere.
Image: Science/AAAS
Despite these technical challenges, Seager remains optimistic and is focused on tackling what she sees as the biggest hurdle for future atmospheric research: identifying biosignature gases that don’t exist on Earth. That possibility became much more realistic with the recent announcement that NASA researchers had discovered a bacterium that can grow from a diet of arsenic and thus doesn’t share the biological building blocks traditionally associated with all life forms. While arsenic isn’t a biosignature gas, Seager says the finding is a reminder that there are likely unrecognized biosignature gases produced by organisms that may exist in configurations that weren’t previously thought possible.

Although each of the more than 500 exoplanets that have been detected to date — with the possible exception of Gliese 581g — are too hot to support molecules that could sustain life, Seager is preparing for the possibility of detecting unknown biosignature gases in the future. To do so, she is reviewing all the byproducts that Earth organisms produce, calculating the likelihood that those byproducts can accumulate in an atmosphere and creating models of the types of planetary environments that could sustain such signatures.