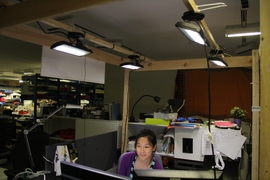 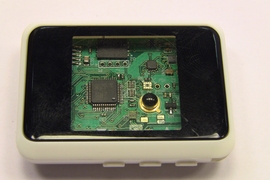 ↓ Download Image
Caption: After initial tests with a larger prototype, Aldrich is currently using this compact device that incorporates sensors and controls In a package not much bigger than a credit card.
Credits: Photo courtesy of Matt Aldrich

Caption:
After initial tests with a larger prototype, Aldrich is currently using this compact device that incorporates sensors and controls In a package not much bigger than a credit card.
Credits:
Photo courtesy of Matt Aldrich
These days, in newer buildings it’s often hard even to find a plain old-fashioned light switch. Often, the only controls are automatic motion-detector switches that turn off lights when people have left a room — or when they sit too still — or else daunting control panels with arrays of sliders and buttons. But some researchers at the MIT Media Lab are aiming to put the controls back in people’s hands, in a way that provides sophisticated and continuous control and could slash lighting bills by more than half.

Media Lab Associate Professor Joseph Paradiso says that “Lighting systems keep getting more complex,” and increasingly use automated controls. But the new system being tested by members of his Responsive Environments Group could put the controls directly on users’ desktops.

The experimental control devices being tested by research associate Matthew Aldrich are about the size of a business card, and thin enough to slip in a pocket. They monitor the light actually falling on the user’s working space, and contain light sensors as well as controls to adjust both the intensity and the color balance of the light. In the current test setup, this information is used to control an array of LED (light-emitting diode) light fixtures, the most energy-efficient kind of lighting now available. And unlike most compact fluorescent bulbs, LEDs can be easily adjusted to any level of intensity.

The tiny controllers not only measure the intensity of the light falling on the workspace from the LEDs, but also identify how much light can come from different fixtures while separately measuring any ambient light coming in from the windows or spillover light from neighboring work areas. So if the sunlight from the window is sufficient to meet the user’s needs for lighting, the overhead lights can dim or switch off altogether, and then are immediately reactivated if the sunlight decreases because clouds roll in. The color balance of the light can also be adjusted by varying the intensity of individual LED lamps of different colors installed in the overhead fixtures.

In tests of the system so far, the researchers found that it reduced the energy used for lighting by 65 to 90 percent — and that’s on top of the already-high energy efficiency of LEDs compared to incandescent lights and compact fluorescents. The impact of such technology could be considerable, given that lighting accounts for 22 percent of all the electricity used in the United States, according to a 2009 Department of Energy study. And while LED lights are the most efficient, the control system could be used with other light sources as well, including incandescents or dimmable fluorescents.

And it’s not just about saving energy, Aldrich explains. “It opens up the space for user controls, so you can adapt the lighting to what suits you best.” In short, it’s potentially both more comfortable for the user and more efficient.

Preliminary results of the ongoing research, which is funded by the Media Lab, were published this summer in the Proceedings of the SPIE, in a paper co-authored by Aldrich, Paradiso and visiting student Nan Zhao.

While the system works in its present form, it needs to ramp the lighting up and down to calibrate the sensor whenever it is moved, and this can produce a distracting but brief sequence of light and dark. Aldrich is now working on a system that incorporates invisible infrared (IR) LEDs in the light fixtures and IR sensors in the controllers. In this way, when the relationship between the IR and visible light is properly calibrated, the adjustment of light levels and the system calibration can be done invisibly and without unnecessary distractions. The group is also using cameras to measure reflected light across illuminated areas and is studying ways of using gestures for lighting control.

In addition, Aldrich plans to do further testing on user reactions to the system in order to optimize the control systems to match user preferences. For example, would it be more effective to let each user control the lighting for his or her own space, or to allow a single control for an area or a work group? And is it better to have the controls in fixed locations, or have portable devices that control lights as a user moves around in the building? “We want to see how users will interact with it, to see if we can really realize these energy savings,” Aldrich says.

Jeffrey Cassis, the CEO of Philips Color Kinetics, a leading manufacturer of LED lights, says that the team doing this work “is world-class — they are working on a hard problem and a quality, cost-effective solution has great potential.” He says that it is important to use a systems approach, as this team is doing, looking at the whole lighting system rather than just individual components. But he adds that the cost of the finished system, as well as how easily it can be used to retrofit existing lighting systems, will be crucial factors in determining its adoption.

And Bob Karlicek, director of the Smart Lighting Engineering Research Center at Rensselaer Polytechnic Institute, says such systems offer the “possibility of much higher energy saving than can be obtained through LED lighting without intelligent control systems.” But, he adds, “There are still significant technical barriers that need to be overcome on at least three fronts: higher efficiency color adjustable LED lighting, new types of lighting sensors that can be used to control lighting systems, and new ways for people to interface with adaptive lighting control systems for maximum productivity and comfort.”