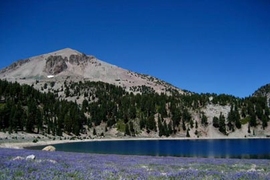 ↓ Download Image
Caption: A picture of Mt. Lassen, an arc volcano in northern California.
Credits: Photo courtesy / Christy B. Till 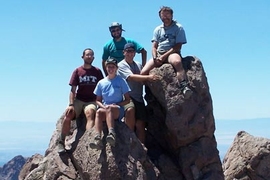 ↓ Download Image
Caption: A group picture atop Mt. Lassen. From left: Etienne Medard, Jay Barr, Christy Till, Mike Krawczynski and Timothy Grove. Grove, Till and Medard are co-authors of the new report.
Credits: Photo courtesy / Christy B. Till

Caption:
A picture of Mt. Lassen, an arc volcano in northern California.
Credits:
Photo courtesy / Christy B. Till

Caption:
A group picture atop Mt. Lassen. From left: Etienne Medard, Jay Barr, Christy Till, Mike Krawczynski and Timothy Grove. Grove, Till and Medard are co-authors of the new report.
Credits:
Photo courtesy / Christy B. Till

For decades, geologists have been puzzled by the mechanisms that give rise to the kind of volcanoes that form the so-called "ring of fire" around the Pacific Ocean. These arc volcanoes, which account for about 10 to 25 percent of all volcanoes, are produced when one of the plates that make up Earth's crust plunges beneath another plate, a process called subduction.

What was unclear was what factors controlled when, how and at what depth fluids and molten rock from these subducting plates are released, giving rise to the molten magma in the Earth's mantle that would then come spewing to the surface in the form of a volcanic eruption. This process produces many of the world's major deposits of important metals, so understanding how it works could help in locating these sources.

The mystery has now been solved, thanks to fieldwork, experiments and computer modeling carried out by Professor of Geology Timothy Grove of the Department of Earth, Atmospheric and Planetary Sciences (EAPS), graduate student Christy Till, and three colleagues. The results were published in the June 4 issue of Nature.

The new findings will force a rewriting of textbooks and encyclopedias, Grove says. The conventional understanding has been that the depth to these descending slabs under arc volcanoes is always 100 kilometers, but recent analysis shows that in fact the depth can vary considerably, from around 60 km to more than 170 km, depending on a number of factors.

Grove says the discovery of this variability in depths led his team to question why that is. One key variable turned out to be the characteristics of a particular mineral called chlorite that forms in the mantle above the oceanic crust. Chlorite contains a large amount of water, and this water is released when the chlorite breaks down at specific combinations of temperature and pressure. Chlorite breakdown occurs at particular depths in the Earth's mantle determined by the exact angle of the slab as it plunges downward. "The stability of this mineral is the key factor in our paper," Till says, because that's what limits the melting process to such a narrow range of conditions. The speed at which the two plates are converging, the team found, has relatively little effect on the melting depth.

"By knowing that process, we can independently come up with a model for the thermal structure below these volcanoes, and why arc magmas come from these certain depths," Till says. Until this research, she says, "we were still missing that link in how arc volcanoes form."

Understanding the process that produces arc volcanoes is important because, among other things, most of the world's major deposits of such metals as silver, copper and molybdenum occur in these formations. Knowing exactly how they form could eventually lead to a better ability to locate such deposits, Grove says.

In addition to Grove and Till, the research was carried out by EAPS graduate student Einat Lev, Nilanjan Chatterjee, a principal research scientist in EAPS, and Etienne Medard, a former EAPS researcher who is now a professor at Clermont-Ferrand in France. The research was supported by a grant from the NSF.

A version of this article appeared in MIT Tech Talk on June 10, 2009 (download PDF).