The legacy of Larry Vale 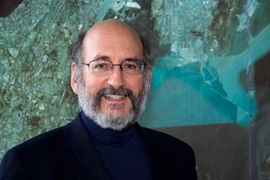 As he steps down from what he good-naturedly calls "year seven of my four-year term as department head," Larry Vale takes satisfaction in what everyone in the Department of Urban Studies and Planning agrees has been a most productive term of office.

Since his appointment as department head in July 2002, Vale has strengthened the junior faculty through tenure and promotion cases and overseen the tripling of the department's research volume from less than $1 million to more than $3 million. To supplement the existing multimillion dollar financial aid programs for Master of City Planning (MCP) and PhD students, he instituted a new program of second-year financial aid for MCP students -- $200,000 was given out last year -- and he helped renew the growth of the undergraduate program, now admitting 10-12 majors a year.

He centralized and improved computer services and resources, built administrative staff and organized a hoopla to celebrate the program's 75th anniversary (for which he curated an exhibit and wrote a catalogue providing extensive documentation, available from department headquarters).

As part of the revamping of the MCP core curriculum, he was also responsible for the implementation, growth and development of the department's "practicum" requirement, both domestically and internationally, and oversaw increased long-term commitments to community building in Lawrence, Springfield, New Orleans, Beijing and the Pearl River Delta in China.

He also oversaw the birth and growth of the MIT-USGS Science Impact Collaborative (MUSIC) to explore new ways of incorporating science in environmental decision making; the growth and consolidation of the Scheller Teacher Education Program; the emergence and development of the China Planning Network and the SENSEable City Lab; the transformation of the Center for Reflective Community Practice into the Community Innovators Lab and the birth of the new initiative in Landscape and Urbanism.

While handling all that, he also published two books -- a new edition of "Architecture, Power and National Identity" (Routledge, 2008) and "The Resilient City: How Modern Cities Recover from Disaster" (Oxford University Press, 2005) edited with Thomas J. Campanella -- and traveled widely to give presentations on disaster recovery, comparative housing redevelopment, urban design and urban security.

And during all that? The department was twice named the No. 1 planning program in North America, maintaining the ranking it had achieved in the mid-1990s, the last time such a survey was conducted.

This month, Vale begins a one-year sabbatical as a visiting scholar at Harvard's Graduate School of Design. He says he found the work of department head highly worthwhile, brokering connections and clearing away administrative roadblocks to help faculty and students achieve their goals.

"You have to take on the goals of others as your own priorities," he says. "But once you do that, it's very satisfying."

He is, however, eager to return full-time to his own work. There's a tower of papers in the corner of his office that represents a fraction of the material he's compiled in preparation for writing two new books -- one on comparative public housing redevelopment and another on the history of planning ideas, which he is co-editing with Bish Sanyal, the Ford International Professor of Urban Development and Planning. Vale will return to teaching in January 2010.

Vale will be succeeded as department head by Amy Glasmeier, who most recently was the E. Willard Miller Professor of Economic Geography at Penn State. She is the first woman to do lead the department since its inception in 1933.