Why we learn more from our successes than our failures 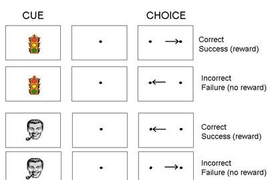 If you've ever felt doomed to repeat your mistakes, researchers at MIT's Picower Institute for Learning and Memory may have explained why: Brain cells may only learn from experience when we do something right and not when we fail.

In the July 30 issue of the journal Neuron, Earl K. Miller, the Picower Professor of Neuroscience, and MIT colleagues Mark Histed and Anitha Pasupathy have created for the first time a unique snapshot of the learning process that shows how single cells change their responses in real time as a result of information about what is the right action and what is the wrong one.

"We have shown that brain cells keep track of whether recent behaviors were successful or not," Miller said. Furthermore, when a behavior was successful, cells became more finely tuned to what the animal was learning. After a failure, there was little or no change in the brain - nor was there any improvement in behavior.

The study sheds light on the neural mechanisms linking environmental feedback to neural plasticity - the brain's ability to change in response to experience. It has implications for understanding how we learn, and understanding and treating learning disorders.

Monkeys were given the task of looking at two alternating images on a computer screen. For one picture, the animal was rewarded when it shifted its gaze to the right; for another picture it was supposed to look left. The monkeys used trial and error to figure out which images cued which movements.

The researchers found that whether the animals' answers were right or wrong, signals within certain parts of their brains "resonated" with the repercussions of their answers for several seconds. The neural activity following a correct answer and a reward helped the monkeys do better on the trial that popped up a few seconds later.

"If the monkey just got a correct answer, a signal lingered in its brain that said, 'You did the right thing.' Right after a correct answer, neurons processed information more sharply and effectively, and the monkey was more likely to get the next answer correct as well," Miller said, "But after an error there was no improvement. In other words, only after successes, not failures, did brain processing and the monkeys' behavior improve."

The prefrontal cortex orchestrates thoughts and actions in accordance with internal goals while the basal ganglia are associated with motor control, cognition and emotions. This work shows that these two brain areas, long suspected to play key roles in learning and memory, have full information available to them to do all the neural computations necessary for learning.

The prefrontal cortex and basal ganglia, extensively connected with each other and with the rest of the brain, are thought to help us learn abstract associations by generating brief neural signals when a response is correct or incorrect. But researchers never understood how this transient activity, which fades in less than a second, influenced actions that occurred later.

In this study, the researchers found activity in many neurons within both brain regions that reflected the delivery or withholding of a reward lasted for several seconds, until the next trial. Single neurons in both areas conveyed strong, sustained outcome information for four to six seconds, spanning the entire time frame between trials.

After a correct response, the electrical impulses coming from neurons in each of the brain areas was more robust and conveyed more information. "The signal-to-noise ratio improved in both brain regions," Miller said. "The heightened response led to them being more likely to get the next trial correct, too. This explains on a neural level why we seem to learn more from our successes than our failures."

This work is supported by National Institute of Neurological Disorders and Stroke and the Tourette's Syndrome Association.