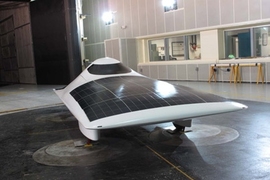 MIT's Solar Electric Vehicle Team, the oldest such student team in the country, has just finished construction of its latest high-tech car and will be unveiling it to the public this Friday from 3 to 5 p.m. in Lobby 13.

The new car, called "Eleanor," is taller than earlier versions and thus allows a much more comfortable upright seating position for the driver, who was in an almost supine position in earlier models. But despite the 30 percent greater frontal area of the vehicle, the new car has exactly the same drag area -- a measure of its wind resistance -- as the team's older one, thanks to some very sophisticated aerodynamic design and wind-tunnel testing.

With six square meters of monocrystalline silicon solar cells and improved electronic systems and design, the car can run all day on a sunny day at a steady cruising speed of 55 mph. The car will be competing in October in the World Solar Challenge race across Australia, and in preparation for that the team plans to drive the car across the United States over the summer. About a dozen team members are expected to go to Australia for the race, although only four will drive the solar car in the competition.

The new vehicle is also equipped with wireless links so that the lead and chase vehicles during the race will be able to monitor every aspect of the car's electrical performance in real time. Its batteries have enough energy, when fully charged, to get the car from Boston to New York City without need of sunlight.

David Sanchez, a senior in Department of Aeronautics and Astronautics who is the aerodynamics lead for the team, has been working on the project for more than two years. "There's no better project for a young guy who wants to do aerodynamics, all the way from conception to design to construction," he says.

Fiona Hughes, a senior in mechanical engineering and business manager of the team, says the experience has also been valuable for the process of "making decisions as a team that satisfy everyone," and adds that being a member of the team "opens doors" in the business world. "I'm interested in working in the area of alternative energy in transportation," she says, and working on the team has helped her toward that goal.