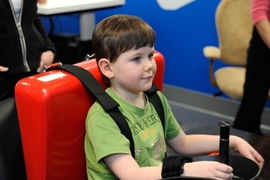 Caption:
A young stroke patient tests out an MIT-developed robotic therapy device at Blythedale Children's Hospital in Westchester County, N.Y.
Credits:
Photo / Peter Lang
Over the past few years, MIT engineers have successfully tested robotic devices to help stroke patients learn to control their arms and legs. Now, they're building on that work to help children with brain injuries and disorders such as cerebral palsy.

Krebs and others at MIT, including professor of mechanical engineering Neville Hogan, pioneered the use of robotic therapy in the late 1980s, and since then the field has taken off.

"We started with stroke because it's the biggest elephant in the room, and then started to build it out to other areas, including cerebral palsy as well as multiple sclerosis, Parkinson's disease and spinal cord injury," says Krebs.

The team's suite of robots for shoulder-and-elbow, wrist, hand and ankle has been in clinical trials for more than 15 years with more than 400 stroke patients. The Department of Veterans Affairs has just completed a large-scale, randomized, multi-site clinical study with these devices.

All the devices are based on the same principle: that it is possible to help rebuild brain connections using robotic devices that gently guide the limb as a patient tries to make a specific movement.

When the researchers first decided to apply their work to children with cerebral palsy, Krebs was optimistic that it would succeed, because children's developing brains are more plastic than adults', meaning they are more able to establish new connections.

The MIT team is focusing on improving cerebral palsy patients' ability to reach for and grasp objects. Patients handshake with the robot via a handle, which is connected to a computer monitor that displays tasks similar to those of simple video games.

In a typical task, the youngster attempts to move the robot handle toward a moving or stationary target shown on the computer monitor. If the child starts moving in the wrong direction or does not move, the robotic arm gently nudges the child's arm in the right direction.

Krebs began working in robotic therapy as a graduate student at MIT almost 20 years ago. In his early studies, he and his colleagues found that it's important for stroke patients to make a conscious effort during physical therapy. When signals from the brain are paired with assisted movement from the robot, it helps the brain form new connections that help it relearn to move the limb on its own.

Even though a stroke kills many neurons, "the remaining neurons can very quickly establish new synapses or reinforce dormant synapses," says Krebs.

For this type of therapy to be effective, many repetitions are required — at least 400 in an hour-long session.

Results from three published pilot studies involving 36 children suggest that cerebral palsy patients can also benefit from robotic therapy. The studies indicate that robot-mediated therapy helped the children reduce impairment and improve the smoothness and speed of their reaching motions.

"In the long run, people that have a stroke, if they are 70 or 80 years old, might stay with us for an average of 5 or 6 years after the stroke," says Krebs. "In the case of cerebral palsy, there is a whole life."

Most of the clinical work testing the device with cerebral palsy patients has been done at Blythedale Children's Hospital in Westchester County, N.Y., and Spaulding Rehabilitation Hospital in Boston. Other hospitals around the country and abroad are also testing various MIT-developed robotic therapy devices.

Krebs' team has focused first on robotic devices to help cerebral palsy patients with upper body therapy, but they have also initiated a project to design a pediatric robot for the ankle.

Among Krebs' and Hogan's collaborators on the cerebral palsy work are Dr. Mindy Aisen '76, former head of the Department of Veterans Affairs Office of Research and Development and presently the director and CEO of the Cerebral Palsy International Research Foundation (CPIRF); Dr. Joelle Mast, chief medical officer, and Barbara Ladenheim, director of research, of Blythedale Children's Hospital; and Fletcher McDowell, former CEO of the Burke Rehabilitation Hospital and a member of the CPIRF board of directors.

MIT's work on robotic therapy devices is funded by CPIRF and the Niarchos Foundation, the Department of Veterans Affairs, the New York State NYSCORE, and the National Center for Medical Rehabilitation Research of the Eunice Kennedy Shriver National Institute of Child Health and Human Development.