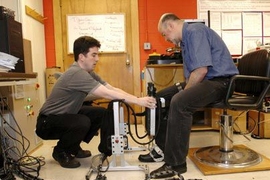 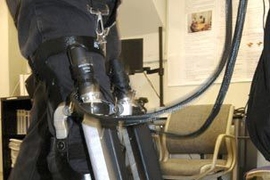 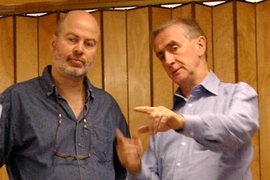 To that end the researchers have created a new Anklebot, and on July 1, MIT and the Baltimore Veterans Administration Medical Center will establish a Center of Excellence on Task-Oriented Exercise and Robotics in Neurological Diseases to further such work on lower extremity movement.

"This heralds a transition of therapeutic robotics from research to practice, similar to when computers went from being specialized number-crunchers for engineering and science to the ubiquitous consumer appliances for word-processing and presentation that we use today," said MIT Professor Neville Hogan, a principal investigator in the work who holds appointments in mechanical engineering and brain and cognitive sciences.

The researchers will be discussing several aspects of their work at the International Conference on Rehabilitation Robotics (ICORR) being held this week in Chicago.

Hermano Igo Krebs, co-principal investigator and a principal research scientist in mechanical engineering, said, "It appears that we are at the cusp of a revolution in the way rehabilitation medicine is practiced, and therapeutic robotics is at center stage.

"The focus of the new center is to accelerate the pace of this revolution using a multisystems approach for the recovery of stroke patients' gait, investigating models of neurological plasticity [the brain's ability to adapt], cardiovascular fitness, therapeutic robotics and behavioral modifications." Krebs is also affiliated with the Weill Medical College of Cornell University and the Burke Medical Research Institute.

Every year some 700,000 U.S. citizens suffer strokes. And, according to Dr. Richard Macko of the Baltimore VA, who will be the principal investigator for the new center, that number will double over the next 20 to 30 years as the baby boomers age. The majority of patients require therapy for problems with language, memory or movement.

About 16 years ago, a team led by Hogan and Krebs focused on the latter. They developed a robot aimed at the recovery of arm movement, naming it MIT-Manus for the link between its general therapeutic focus and MIT's motto, "mens et manus" (mind and hand).

Over the last seven years, the two and colleagues have reported positive results from six clinical trials involving almost 300 stroke patients. Each trial addressed different questions, such as the short- and long-term benefits of the therapy.

In the MIT-Manus therapy, a person sitting at a table puts a lower arm and wrist into a brace attached to the arm of the robot. A video screen prompts the person to perform an arm exercise such as connecting the dots or drawing the hands of a clock. If movement does not occur, MIT-Manus moves the person's arm. If the person starts to move on his own, the robot provides adjustable levels of guidance and assistance to facilitate the person's arm movement.

In the first clinical trial, the researchers found that stroke patients who used the machine four to five hours a week improved further and faster, as measured by increased function of the impaired limb, than a second group of patients that did not receive robot-assisted therapy. "In fact, patients in the robot-assisted group improved twice as much as the control group," Krebs said. At the same time, the trial showed that the robot is well tolerated by patients and causes no pain.

The new center at the Baltimore VA aims to "implement for the lower extremities what we did for the upper extremities," Krebs said.

The MIT-Manus work also answered a longstanding question among therapists: manual manipulation of a stroke victim's disabled limb does indeed aid recovery of the use of that limb. "There had been a great deal of intuitive belief that this works, but our research provided conclusive objective evidence," said Hogan, who is director of MIT's Newman Laboratory for Biomechanics and Human Rehabilitation.

The researchers have also been creating other machines focusing on different parts of the body. These include one for the spatial movements of the shoulder and elbow, one for the wrist and one for the hand. "We've seen hints that generalization [from one machine] is limited, and to deliver optimal therapy clinicians need a gym of robots," said Krebs.

Most recently the team created a prototype for therapy of the ankles, dubbed the Anklebot. The idea is analogous to MIT-Manus: Get the robot, which fits around the leg in a brace, to help improve movement of a paralyzed ankle. Among other things, better balance and more efficient movement of the joint would help improve gait and prevent the falls that are common to stroke victims who have limited mobility.

Other MIT collaborators presenting at ICORR are MIT affiliate Dr. Susan Fasoli and Steven Charles, a Ph.D. candidate in the MIT-Harvard Division of Health Sciences and Technology.

The work is funded by the National Institutes of Health, the Veterans Administration and a N.Y. State Score Award.