MIT robot is promising tool for rehabilitation of stroke victims 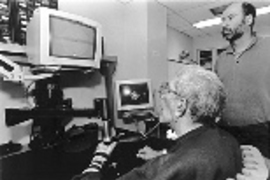 CAMBRIDGE, Mass--An MIT robot for physical therapy of the arm and wrists is a promising new tool for the rehabilitation of stroke victims, as evidenced by results from the first clinical trial of the machine.

In the study, stroke patients who used the machine four to five hours a week improved further and faster, as measured by increased function of the impaired limb, than a second group of patients that did not receive robot-assisted therapy. At the same time, the trial showed that the robot is well-tolerated by patients and causes no pain.

Although it's not clear whether it was the robot or the additional exercises that led to the improvements, these results show the feasibility of the robotic technique. This opens the door for further use of the machine, which offers certain advantages over traditional therapy. For example, it can quantify forces and movements that until now have been judged by "touch and feel." Such data would provide a permanent, objective record of a patient's progress that could be used in many ways.

The clinical trial also answered a long-standing question among therapists: manual manipulation of a stroke victim's disabled limb does indeed aid recovery of the use of that limb. "There had been a great deal of intuitive belief that this works, but until now there was no objective evidence," said Neville Hogan, principal investigator for the work and an MIT professor with dual appointments in mechanical engineering and brain and cognitive sciences.

The work was reported in the March 1998 IEEE Transactions on Rehabilitation Engineering and in a 1997 issue of the Archives of Neurology. Professor Hogan's colleagues are Hermano I. Krebs, a research scientist in mechanical engineering, and Drs. Mindy L. Aisen (MIT '76), Fletcher H. McDowell, and Bruce T. Volpe of the Burke Rehabilitation Center in White Plains, NY. The first clinical trial was held at Burke, as is a second, larger trial currently underway.

To use the robot--named MIT-Manus for the link between its therapeutic focus and MIT's motto "mens et manus," or mind and hand--a person sitting at a table puts the lower arm and wrist into a brace that is in turn attached to the "arm" of the robot. With "hand over hand" instruction, a therapist then physically guides the patient through a given exercise. The machine "goes along for the ride" and records the session.

MIT-Manus can then reproduce the exercise and guide the patient through it. And as the patient begins to recover and starts to initiate some movement on his/her own, the robot can measure how much force the patient is applying and adjust the amount of resistance it provides.

All exercises are visually guided. "Video games provide the visual feedback and constitute a key motivational aspect," Dr. Krebs said. The computer screen on which the games appear sits on the table in front of the patient.

In the first clinical trial, which lasted slightly over a year, two groups of 10 stroke patients received standard therapy. People in the experimental group received an additional daily hour of robot-aided therapy. The others received "sham" robot therapy once a week; they were exposed to the robot but it didn't guide them through exercises. (They moved the robot manually, using their good arm to guide the disabled arm to play the video games.) As a result, the experimental group received many more manipulations.

Although the results of the trial are encouraging, the group size was small. To that end, the researchers are currently conducting a larger trial with 60 total patients that should conclude this August. Among other things, "we want to confirm that the extra therapy [with MIT-Manus] genuinely leads to increased recovery," said Dr. Aisen.

The researchers envision many applications for MIT-Manus. For example, "I think it could assist a therapist by performing repetitive exercises," Dr. Aisen said. "If human therapists were free from the more tedious end of therapy, they could focus on more difficult problems such as training people to get in and out of a car or access a computer--things the robot can't do."

MIT-Manus can also "precisely standardize the therapy delivered, potentially providing a graded exercise program that adjusts to patient response on a continuous basis," the researchers write in the Archives of Neurology.

The work was sponsored by the Burke Medical Research Foundation.