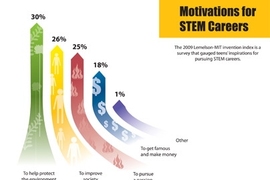 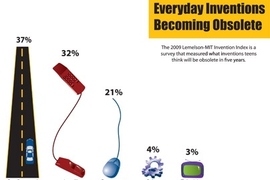 American teens are embracing the subjects of science, technology, engineering and mathematics (STEM) with increasingly positive attitudes; yet many lack the necessary encouragement from mentors and role models in these fields, according to this year's Lemelson-MIT Invention Index.

The annual survey, which gauges Americans' perceptions about invention and innovation, also reveals teens' altruistic intentions and feelings of preparedness to pursue careers in STEM fields.

The 2009 Lemelson-MIT Invention Index found an overwhelming majority of teens surveyed (85 percent) expressed interest in science, technology, engineering and mathematics, with "curiosity about the way things work" as the driving factor for their interest (44 percent). Of those teens expressing interest in these areas of study, most would be motivated to work in related fields out of altruistic versus materialistic motives: more than half of teens (56 percent) selected "protecting the environment" or "improving our society" as their inspiration. Less than one-fifth (18 percent) said they were motivated to pursue science, technology, engineering or mathematics for the purposes of becoming rich or famous.

Not only did the majority of teens convey interest in STEM, but 80 percent also feel their schools have prepared them to pursue a career in these fields, should they choose.

Teens' optimism about STEM is also evident in their perceptions of people employed in related professions. Contrary to traditional stereotypes of the "geeky scientist," more than half of teens surveyed (55 percent) believe scientists, engineers and mathematicians are best described as "intelligent" and one-quarter (25 percent) chose "successful." Only 5 percent of teens selected "nerdy" as the best description.

"As an educator, it's exciting to see that teens have such positive perceptions about science, technology, engineering and mathematics; traditionally, many students find these subjects intimidating," said Leigh Estabrooks, invention education officer with the Lemelson-MIT Program, a nonprofit organization that recognizes outstanding inventors and inspires young people to pursue creative lives and careers through invention.

"Increased exposure to STEM through hands-on learning and interaction with teachers and professionals in these fields may be partly responsible for this positive shift in teens' perceptions," Estabrooks added. "It may also continue to help shake off any existing stereotypes, making STEM careers seem more accessible."

Despite interest and feelings of preparedness, nearly two-thirds of teens indicated that they may be discouraged from pursuing a career in science, technology, engineering or mathematics because they do not know anyone who works in these fields (31 percent) or understand what people in these fields do (28 percent). Estabrooks further states, "If teens feel discouraged from pursuing a career in STEM, society may be deprived of emerging problem solvers and thought leaders to address pressing issues. The Lemelson-MIT InvenTeam initiative is one way schools can serve as vehicles to introduce mentors and role models into the process."

Lemelson-MIT InvenTeams are teams of high school students, teachers and mentors that receive grants up to $10,000 each to invent technological solutions to real-world problems. The initiative is designed to excite high school students about invention; empower students to problem solve; and encourage an inventive culture in schools and communities. The 2008-2009 Lemelson-MIT InvenTeam initiative alone has provided nearly 350 teens with real-world experience and role models in STEM.

"The InvenTeam initiative is just one example of how young people can experience the impact of invention in everyday life. Our hope is that exposing students to mentors in STEM fields will empower and motivate them to seek inventive careers and support their optimism at the high school level," states Joshua Schuler, executive director of the Lemelson-MIT Program. "As a society, we must continue to cultivate future generations of STEM thinkers and inventors. This is a fundamental investment in the future strength of the U.S. economy."

Obsolete Inventions: 37 percent of teens surveyed believe that gas-powered cars will most likely be obsolete five years from now (versus the landline phone, computer mouse and television).

Presidential Priorities: Recognizing the need for alternative energy sources, 43 percent of teens would like President-elect Obama to focus his attention on the energy crisis, while one-third of teens (33 percent) would like the focus to be on medical discoveries.

Global Concerns: World poverty, getting a good job and the rise in cancer and other devastating diseases were the top three concerns shared by 73 percent of the teens surveyed (with almost even percentages for each concern).