By understanding why Africa has not yet adopted technologies and practices that can dramatically boost productivity, researchers hope to improve farmers’ lives.
Publication Date:
Press Inquiries 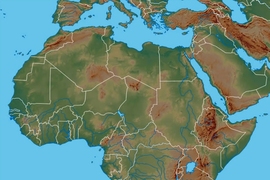 Close
Economists at the Massachusetts Institute of Technology (MIT) and the University of California, Berkeley, today announced a collaboration that could help chart a pathway out of poverty for millions of farmers in Sub-Saharan Africa.

More than two-thirds of people in Sub-Saharan Africa rely on agriculture for employment and many of them live on small farms and earn less than $1 per day. While the agricultural sector has developed considerably over the past several decades in countries such as Mexico, India, and China — largely thanks to technologies and practices developed during the 1960s and 1970s — most farmers in rural Sub-Saharan Africa have neither taken up technologies nor seen much improvement in their living standards. With an aim to understand why this hasn’t happened and with the ultimate goal of increasing the livelihood of poor farmers, this research project will provide critical information about how to overcome the barriers of adoption so that farmers can benefit from technologies and practices that could dramatically improve their lives.

Funded by a $4.4 million grant from the Bill & Melinda Gates Foundation to MIT, and $1.6 million from an anonymous donor, a team of researchers from MIT’s Abdul Latif Jameel Poverty Action Lab (J-PAL) and the Center of Evaluation for Global Action (CEGA) at UC Berkeley have launched the Agricultural Technology Adoption Initiative. The effort will apply behavioral economics, the study of why people make economic choices, to real-world problems faced by farmers and agricultural development organizations.

“The Gates Foundation has invested considerable resources in the development of new agricultural technologies,” said Rachel Glennerster, executive director of J-PAL. “But to maximize the gains from this investment, we need to know why many existing technologies —that could dramatically improve people’s lives — are not getting adopted, and how best to promote adoption of new technologies.”

Researchers in this six-year initiative will study the effectiveness of different approaches including new financing schemes, distribution mechanisms, information sharing, and marketing strategies.

“Lack of access to assets and to public services — including land, timely and reliable information, and financial services — are major barriers to the adoption of new technologies by the poor,” said Alain de Janvry, professor of agricultural and resource economics at UC Berkeley. “How can we overcome these constraints cost-effectively to secure adoption?”

De Janvry co-authored the World Bank’s 2008 report on agriculture and development, which concluded that the agricultural sector in developing nations has been underfunded for the past two decades and called for a renewed focus on agricultural development in order to reduce global poverty and hunger.

The researchers will work with international partners to select their collaborative research projects. Principal investigators for the initiative include Abhijit Banerjee and Rachel Glennerster of MIT; Nava Ashraf of Harvard Business School; UC Berkeley’s De Janvry; Paul Gertler, a professor of economics at the Haas School of Business and of health services finance;  and Elisabeth Sadoulet, a professor of agricultural and resource economics.

This grant is part of the Bill & Melinda Gates Foundation’s Agricultural Development initiative, which is working with a wide range of partners in Sub-Saharan Africa and South Asia to provide millions of small farmers in the developing world with tools and opportunities to boost their yields, increase their incomes, and build better lives for themselves and their families. The foundation is working to strengthen the entire agricultural value chain — from seeds and soil to farm management and market access — so that progress against hunger and poverty is sustainable over the long term.