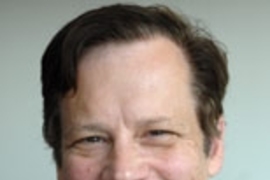 Caption:
Robert Desimone, director of the McGovern Institute for Brain Research and the Doris and Don Berkey Professor of Neuroscience at MIT
Credits:
Photo: Donna Coveney
Just as our world buzzes with distractions — from phone calls to e-mails to tweets — the neurons in our brain are bombarded with messages. Research has shown that when we pay attention, some of these neurons begin firing in unison, like a chorus rising above the noise. Now, a study in the May 29 issue of Science reveals the likely brain center that serves as the conductor of this neural chorus.

MIT neuroscientists found that neurons in the prefrontal cortex — the brain's planning center — fire in unison and send signals to the visual cortex to do the same, generating high-frequency waves that oscillate between these distant brain regions like a vibrating spring. These waves, also known as gamma oscillations, have long been associated with cognitive states such as attention, learning and consciousness.

"We are especially interested in gamma oscillations in the prefrontal cortex because it provides top-down influences over other parts of the brain," explains senior author Robert Desimone, director of the McGovern Institute for Brain Research and the Doris and Don Berkey Professor of Neuroscience at MIT. "We know that the prefrontal cortex is affected in people with schizophrenia, ADHD and many other brain disorders, and that gamma oscillations are also altered in these conditions. Our results suggest that altered neural synchrony in the prefrontal cortex could disrupt communication between this region and other areas of the brain, leading to altered perceptions, thoughts, and emotions."

MIT Tech TV
Neurons in the visual cortex (area V4) encode the visual scene, and neurons in the FEF portion of prefrontal cortex control the focus of attention. When attention (cone and circle) is directed to the red book, neurons in FEF and V4 (represented by red triangles) start firing rhythmically, and the neural activity becomes synchronized across the two areas.

To explain neural synchrony, Desimone uses the analogy of a crowded party with people talking in different rooms. If individuals raise their voices at random, the noise just becomes louder. But if a group of individuals in one room chant together in unison, the next room is more likely to hear the message. And if people in the next room chant in response, the two rooms can communicate.

In the Science study, Desimone looked for patterns of neural synchrony in two "rooms" of the brain associated with attention — the frontal eye field (FEF) within the prefrontal cortex and the V4 region of the visual cortex. Lead authors Georgia Gregoriou, a postdoctoral associate in the Desimone lab, and Stephen Gotts of the National Institute of Mental Health, trained two macaque monkeys to watch a monitor displaying multiple objects, and to concentrate on one of the objects when cued. They monitored neural activity from the FEF and the V4 regions of the brain when the monkeys were either paying attention to the object or ignoring it.

When the monkeys first paid attention to the appropriate object, neurons in both areas showed strong increases in activity. Then, as if connected by a spring, the oscillations in each area began to synchronize with one another. Desimone's team analyzed the timing of the neural activity and found that the prefrontal cortex became engaged by attention first, followed by the visual cortex — as if the prefrontal cortex commanded the visual region to snap to attention. The delay between neural activity in these areas during each wave cycle reflected the speed at which signals travel from one region to the other — indicating that the two brain regions were talking to one another.

Desimone suspects this pattern of oscillation is not just specific to attention, but could also represent a more general mechanism for communication between different parts of the brain. These findings support speculation that gamma synchrony enables far-flung regions of the brain to rapidly communicate with each other — which has important implications for understanding and treating disorders ranging from schizophrenia to impaired vision and attention. "This helps us think about how to approach studying and treating these disorders by finding ways to restore gamma rhythms in the affected brain regions."

Huihui Zhou, a research scientist in the Desimone lab, contributed to this study. The NIH/National Eye Institute and National Institute of Mental Health supported this research.