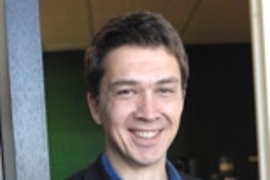 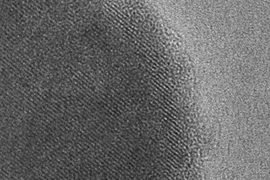 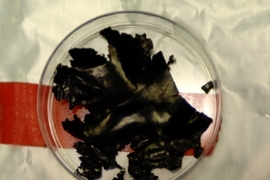 Caption:
Scanning electron micrograph of a particle of the new battery material. Dark area indicates the inside of the particle surrounded by a lighter surface layer only five nanometers wide.
Credits:
Image courtesy / Ceder Lab

Caption:
A sample of the new battery material that could allow quick charging of portable devices.
Credits:
Photo / Donna Coveney

MIT engineers have created a kind of beltway that allows for the rapid transit of electrical energy through a well-known battery material, an advance that could usher in smaller, lighter batteries -- for cell phones and other devices -- that could recharge in seconds rather than hours.

The work could also allow for the quick recharging of batteries in electric cars, although that particular application would be limited by the amount of power available to a homeowner through the electric grid.

The work, led by Gerbrand Ceder, the Richard P. Simmons Professor of Materials Science and Engineering, is reported in the March 12 issue of Nature. Because the material involved is not new -- the researchers have simply changed the way they make it -- Ceder believes the work could make it into the marketplace within two to three years.

State-of-the-art lithium rechargeable batteries have very high energy densities --Â they are good at storing large amounts of charge. The tradeoff is that they have relatively slow power rates -- they are sluggish at gaining and discharging that energy. Consider current batteries for electric cars. "They have a lot of energy, so you can drive at 55 mph for a long time, but the power is low. You can't accelerate quickly," Ceder said.

Why the slow power rates? Traditionally, scientists have thought that the lithium ions responsible, along with electrons, for carrying charge across the battery simply move too slowly through the material.

About five years ago, however, Ceder and colleagues made a surprising discovery. Computer calculations of a well-known battery material, lithium iron phosphate, predicted that the material's lithium ions should actually be moving extremely quickly.

"If transport of the lithium ions was so fast, something else had to be the problem," Ceder said.

Further calculations showed that lithium ions can indeed move very quickly into the material but only through tunnels accessed from the surface. If a lithium ion at the surface is directly in front of a tunnel entrance, there's no problem: it proceeds efficiently into the tunnel. But if the ion isn't directly in front, it is prevented from reaching the tunnel entrance because it cannot move to access that entrance.

Ceder and Byoungwoo Kang, a graduate student in materials science and engineering, devised a way around the problem by creating a new surface structure that does allow the lithium ions to move quickly around the outside of the material, much like a beltway around a city. When an ion traveling along this beltway reaches a tunnel, it is instantly diverted into it. Kang is a co-author of the Nature paper.

Using their new processing technique, the two went on to make a small battery that could be fully charged or discharged in 10 to 20 seconds (it takes six minutes to fully charge or discharge a cell made from the unprocessed material).

Ceder notes that further tests showed that unlike other battery materials, the new material does not degrade as much when repeatedly charged and recharged. This could lead to smaller, lighter batteries, because less material is needed for the same result.

"The ability to charge and discharge batteries in a matter of seconds rather than hours may open up new technological applications and induce lifestyle changes," Ceder and Kang conclude in their Nature paper.

This work was supported by the National Science Foundation through the Materials Research Science and Engineering Centers program and the Batteries for Advanced Transportation Program of the U.S. Department of Energy. It has been licensed by two companies.

A version of this article appeared in MIT Tech Talk on March 18, 2009 (download PDF).