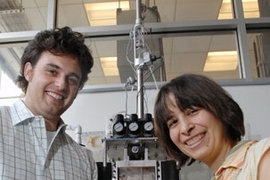 ↓ Download Image
Caption: Mechanical Engineering Professor Anette Hosoi and graduate student Amos Winter developed a robo-clam,that could lead to "smart" anchoring technologies. Outside the testing device they hold clamshells of some of the clams they tested.
Credits: Photo / Donna Coveney 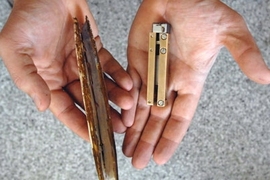 ↓ Download Image
Caption: Inspired by the amazing ability of the small clam to dig and wedge itself far deeper and more securely than would be thought, they show the robo-clam, a metal device on the right, anchored in sand in a testing device right next to a razor clam in the sand to the left.
Credits: Photo / Donna Coveney

Caption:
Mechanical Engineering Professor Anette Hosoi and graduate student Amos Winter developed a robo-clam that could lead to "smart" anchoring technologies. Outside the testing device they hold clamshells of some of the clams they tested.
Credits:
Photo: Donna Coveney

Caption:
Inspired by the amazing ability of the small clam to dig and wedge itself far deeper and more securely than would be thought, they show the robo-clam, a metal device on the right, anchored in sand in a testing device right next to a razor clam in the sand to the left.
Credits:
Photo: Donna Coveney
The simple razor clam has inspired a new MIT robot that could lead to a "smart" anchor that burrows through the ocean floor to reposition itself and could even reverse, making it easier to recover.

The so-called RoboClam is being developed to explore the performance capabilities of clam-inspired digging, as well as to shed light on the behavior of the real animal.

"Our original goal was to develop a lightweight anchor that you could set then easily unset, something that's not possible with conventional devices," said Anette "Peko" Hosoi, an associate professor in the Department of Mechanical Engineering whose collaborators on the work are Amos Winter, a graduate student in her lab, and engineers at Bluefin Robotics Corp.

Such devices could be useful, for example, as tethers for small robotic submarines that are routinely repositioned to monitor variables such as currents and temperature. Further, a device that can burrow into the seabed and be directed to a specific location could also be useful as a detonator for buried underwater mines.

Winter presented the team's latest results Nov. 23 at a meeting of the American Physical Society.

For several years, Hosoi's research has focused on novel propulsion mechanisms inspired by nature. So when faced with the anchor problem, "We thought, 'is there an animal that's well adapted to moving through sediments on the seafloor?'"

The first stage of the research, Winter said, involved "looking at all the organisms I could find that dig into the ocean bottom, stick to it or cling to it mechanically."

He found what the researchers dub the Ferrari of underwater diggers: the razor clam. The animals, about seven inches long by an inch wide, "can go about a centimeter a second, so you have to dig fast to catch them," said Winter, who became a licensed clam digger as a result of the research.

Another reason razors make a good model for novel anchors: they can dig deeply (up to about 70 centimeters). Plus, in a measure of anchoring force, or how hard you pull before an anchor rips out of the soil compared to the energy required to embed the anchor, "razor clams beat everything, including the best anchors, by at least a factor of 10," Winter said.

Research subject in hand, one of the team's first tests gave perplexing results. They pushed a clam shell cast in epoxy into "sand" composed of glass beads, and compared the amount of force necessary to do so to what the living animal is capable of. They found a major discrepancy between the two.

"They're much too weak to do what they do," Hosoi said. "So we knew they were doing something tricky."

To find out what, Winter created a glass-sided box filled with water and beads, added a living clam, and watched the animal burrow. It turns out to be a multi-step process. The animal's tongue-like "foot" wiggles down into the sand, then the animal makes a quick up-and-down movement accompanied by opening and closing its shell. Together these movements propel it.

By filming the movement of the beads, Winter made a startling discovery. The clam's quick up-and-down, opening-and-closing movements turn the waterlogged "sand" around it into a liquid-like quicksand. Experiments showed that "moving through a fluidized substrate [the quicksand] rather than a packed granular medium [ordinary sand] drastically reduces the drag force on the clam's body, bringing it to a point within the animal's strength capabilities," Winter reported.

Over the past summer, Winter completed the RoboClam itself. Although only about the size of a lighter, it is supported by a large apparatus of pressure regulators, pistons and more that control such things as how hard the robot is pushed in each direction.

"Right now we're getting it up and running" for tests, Winter said. Among them, "we want to use RoboClam to verify the theory we've generated to describe how to dig like a clam."

This work was sponsored by Bluefin, Battelle and Chevron.