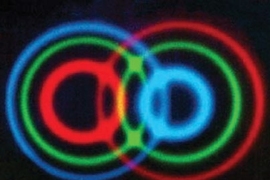 A bizarre but well-established aspect of quantum physics could open up a new era of electronic detectors and imaging systems that would be far more efficient than any now in existence, according to new insights by an MIT leader in the field.

MIT Professor of Mechanical Engineering Seth Lloyd has found that a peculiar quantum-physics property called entanglement can be harnessed to make detectors--similar in principle to radar systems used to track airplanes in flight or ships at sea--that are as much as a million times more efficient than existing systems. In addition, beams of entangled light could be swept across a scene to reconstruct a detailed image, with a similar improvement in efficiency.

The new findings, being reported this week in the journal Science, are purely theoretical, but Lloyd says that laboratory experiments have already proven the feasibility of both the light sources and the detectors needed for such a quantum-based photodetection system, so he anticipates that within a year it should be possible to build a laboratory-scale system to demonstrate the new concept.

"It should be possible to have at least a proof-of-principle demonstration within six months to a year," Lloyd said.

For example, military applications could include improved night-vision systems, which send out beams of infrared light--invisible to the naked eye--to sweep across a scene, and then use an infrared detector to reconstruct an image from the light that is reflected back. A more efficient system, using the quantum-entanglement effect, would make it much more difficult for an adversary to detect the fact that such a system was being used, because there would be so much less infrared light needed to provide the illumination.

Theoretically, such a system could be used to allow medical diagnostic systems such as CT scans to work with a vastly reduced X-ray output, thereby making them much safer for the patient, but such applications would be much further in the future. It could also someday be used for safer microscope imaging of living organisms.

Entanglement is a strange property that was deduced theoretically on the basis of the laws of quantum physics, and has been demonstrated over the last several years in a variety of laboratory experiments. Under certain circumstances, when an atom gives off two photons of light at the same time, the two are "entangled" even as they go off in different directions, so that anything that changes one of the photons simultaneously changes the other as well.

This odd property makes it possible to perform seemingly impossible feats such as "quantum teleportation," in which all of the properties of one subatomic particle are recreated in a different particle some distance away. It has also been demonstrated as a way of producing seemingly foolproof encryption systems for data transmission. But explanations of exactly what underlies the entanglement phenomenon remain controversial.

Lloyd says that he cannot provide a simple, intuitive explanation for why the quantum illumination system described in this report actually works, but is certain that the theoretical calculations demonstrating it are correct. "It is as if the two entangled photons retain a memory of each other long after any such memory should have faded away," he said.