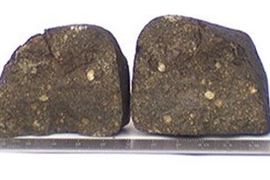 For the last few years, astronomers have faced a puzzle: The vast majority of asteroids that come near the Earth are of a type that matches only a tiny fraction of the meteorites that most frequently hit our planet.

Since meteorites are mostly pieces of asteroids, this discrepancy was hard to explain, but a team from MIT and other institutions has now found what it believes is the answer to the puzzle. The smaller rocks that most often fall to Earth, it seems, come straight in from the main asteroid belt out between Mars and Jupiter, rather than from the near-Earth asteroid (NEA) population.

The puzzle gradually emerged from a long-term study of the properties of asteroids carried out by MIT professor of planetary science Richard Binzel and his students, along with postdoctoral researcher P. Vernazza, who is now with the European Space Agency, and A.T. Tokunaga, director of theÂ NASA Infrared Telescope Facility.

By studying the spectral signatures of near-Earth asteroids, they were able to compare them with spectra obtained on Earth from the thousands of meteorites that have been recovered from falls. But the more they looked, the more they found that most NEAs -- about two-thirds of them -- match a specific type of meteorites called LL chondrites, which only represent about 8 percent of meteorites. How could that be?

"Why do we see a difference between the objects hitting the ground and the big objects whizzing by?" Binzel asks. "It's been a headscratcher." As the effect became gradually more and more noticeable as more asteroids were analyzed, "we finally had a big enough data set that the statistics demanded an answer. It could no longer be just a coincidence."

Way out in the main belt, the population is much more varied, and approximates the mix of types that is found among meteorites. But why would the things that most frequently hit us match this distant population better than it matches the stuff that's right in our neighborhood? That's where the idea emerged of a fast track all the way from the main belt to a "splat!" on Earth's surface.

This fast track, it turns out, is caused by an obscure effect that was discovered long ago, but only recently recognized as a significant factor in moving asteroids around, called the Yarkovsky effect.

The Yarkovsky effect causes asteroids to change their orbits as a result of the way they absorb the sun's heat on one side and radiate it back later as they rotate around. This causes a slight imbalance that slowly, over time, alters the object's path. But the key thing is this: The effect acts much more strongly on the smallest objects, and only weakly on the larger ones.

"We think the Yarkovsky effect is so efficient for meter-size objects that it can operate on all regions of the asteroid belt," not just its inner edge, Binzel says.

Thus, for chunks of rock from boulder-size on down -- the kinds of things that end up as typical meteorites -- the Yarkovsky effect plays a major role, moving them with ease from throughout the asteroid belt on to paths that can head toward Earth. For larger asteroids a kilometer or so across, the kind that we worry about as potential threats to the Earth, the effect is so weak it can only move them small amounts.

Binzel's study concludes that the largest near-Earth asteroids mostly come from the asteroid belt's innermost edge, where they are part of a specific "family" thought to all be remnants of a larger asteroid that was broken apart by collisions. With an initial nudge from the Yarkovsky effect, kilometer-sized asteroids from the Flora region can find themselves "over the edge" of the asteroid belt and sent on a path to Earth's vicinity through the perturbing effects of the planets called resonances.

The new study is also good news for protecting the planet. One of the biggest problems in figuring out how to deal with an approaching asteroid, if and when one is discovered on a potential collision course, is that they are so varied. The best way of dealing with one kind might not work on another.

But now that this analysis has shown that the majority of near-Earth asteroids are of this specific type -- stony objects, rich in the mineral olivine and poor in iron -- it's possible to concentrate most planning on dealing with that kind of object, Binzel says. "Odds are, an object we might have to deal with would be like an LL chondrite, and thanks to our samples in the laboratory, we can measure its properties in detail," he says. "It's the first step toward 'know thy enemy'."

The research is being reported this week in the journal Nature. In addition to Binzel, Vernazza and Tokunaga, the co-authors are MIT graduate students Christina Thomas and Francesca DeMeo, S.J. Bus of the University of Hawaii, and A.S. Rivkin of Johns Hopkins University. The work was supported by NASA and the NSF.