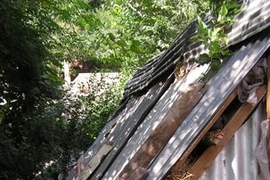 Around the world, an estimated one billion people--mostly in rural villages and the shanty towns surrounding developing-world cities--live in houses whose roofs are nothing more than thin sheets of corrugated metal. These houses become unbearably hot in the summer, freezing in the winter (especially in high-altitude regions), and deafeningly noisy when heavy rains pound on the bare metal.

A group of students from MIT and elsewhere think they have found a way to fix these problems all while generating jobs and income for local people in the process. This summer, they'll be putting their ideas to the test.

The basic concept is straightforward: Use locally available agricultural waste, such as straw, held together with a binder made of local resins, to make insulating panels that can be installed right under the existing corrugated metal panels. The panels, based on designs by MIT faculty and students from the Building Technology lab, can be manufactured locally, providing a ready-made way for local people to create businesses that will use readily-available materials, provide an inexpensive product to meet a major local need, and keep the profits in the community.

The concept grew out of a class project last fall by MIT graduate student Zehra Ali, along with Emmanuel Arnaud of the Kennedy School of Government and Monica Le of the Harvard School of Public Health (who had both cross-registered into the MIT class). The three were taking Developmental Entrepreneurship, taught by MIT professor Alex (Sandy) Pentland and research fellow Joost Bonsen. MIT alum Mubarik Imam '06 later joined the team.

Ali, who was born in Seattle but grew up in Pakistan, has just returned from a visit to villages in the northern part of the country, where the need for such panels is particularly acute. A major earthquake in 2005 there claimed 80,000 lives, many of them when the heavy, earthen roofs of their homes collapsed. As a result, the government has been strongly pushing the people to rebuild with lightweight roofs made of CGI--corrugated galvanized iron.

But with the CGI roofs, Ali says, "it gets too hot inside in the summer ... In the monsoon season, it makes a lot of noise and people can't sleep." And in winter, most of the heat from indoor stoves and heating devices escapes right through the roof.

By introducing the insulated panels, the consumption of wood for heating could also be drastically reduced, the team hopes. Only 4.5 percent of northern Pakistan's forests remain, Ali said, primarily because of deforestation due to massive timber logging and wood-gathering for cooking and heating. Further, greenhouse gas emissions would be cut, as would the negative health effects of indoor pollution from the heating fires.

Ali and her teammates have formed a company called Ghonsla--which means nest in Urdu, the national language of Pakistan--to develop and test the insulating panels, and then provide them in Pakistan and other underserved markets. This summer, they will produce an initial test run of 300 panels, each the size of a CGI panel and 1.5 inches thick, to be installed in one school and 10 carefully selected houses in the area. They will try out five different kinds of locally available resins to see which is most cost effective and works best. Then, the panels' performance--durability and insulating qualities--will be tracked over the next year to provide solid in-the-field data before production begins on a large scale.

The basic design for the straw-and-resin panels was created a decade ago by MIT professors Leslie Norford and Leon Glicksman, working with some graduate students. But after three theses were published on the concept, "nothing happened, it wasn't really picked up" until now, Ali says.

Team Ghonsla's plan has already attracted some attention and help, by winning a $5,000 Yunus Innovation Challenge Award in MIT's annual IDEAS competition and $5,000 as a runners up in the Social Enterprise track at Harvard, and they have secured another $10,000 of VC funding.

The Pakistan tests are just the beginning, Ali stresses. "CGI sheets are used by a billion people," she says. "There's an opportunity for these insulation panels all over the world," and NGOs and alumni networks have already taken an interest in India, Afghanistan and Peru, areas that have similar climates to Pakistan's.