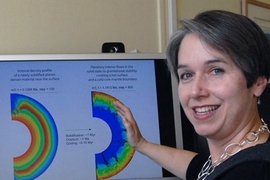 Young planets around other stars may be easier to spot because they stay hotter way longer than astronomers have thought, according to new work by MIT planetary scientist Linda Elkins-Tanton.

For a few million years after their initial formation, planets like Earth may maintain a hot surface of molten rock that would glow brightly enough to make them stand out as they orbit neighboring stars. Elkins-Tanton, Mitsui Career Development Professor of Geology in the Department of Earth, Atmospheric and Planetary Sciences, says the "magma ocean" stage for Earth-sized planets may last a few million years, much longer than previously estimated. "That means we may actually see them elsewhere, as detection systems get better," she said.

She will be presenting her new findings Tuesday, Oct. 14, at the annual meeting of the American Astronomical Society's Division for Planetary Sciences, being held this year in Ithaca, N.Y. The research shows that even after the surface magma solidifies, within about five million years, it could stay hot enough to glow brightly in infrared light for tens of millions of years, providing a relatively long window for detectability.

The big problem for astronomers hoping to detect planets around other stars is the vast difference in brightness between the star and the planet, which shines only by reflecting light from its parent star. But the difference in brightness in infrared wavelengths for a glowing, molten planetary surface would be much less, making the detection more feasible.

The long duration of the molten stage turns out to be the result of a two-stage process, Elkins-Tanton explained. The initial heating, generated by a combination of radioactivity in the planet's interior and the heat generated by the collision of millions of chunks of rock crashing together to form the planet, actually is quite short-lived: The planet's surface is expected to solidify quickly, within a few hundred thousand years, as originally thought. But then a secondary upheaval begins, in which heavier iron-rich material that has solidified at the surface begins to sink toward the core, causing other hotter material to rise to the surface.

This "overturn" process, it turns out, produces the much-longer-lived molten surface, lasting for millions of years, she said. Because the Earth's crust is so dynamic, there is no material left from that initial epoch that could be studied to test this modelling, she said, but on other planets such as Mars or Mercury there might be early remnant rocks that could be tested. The analysis also leads to specific conclusions about the surface composition of planets, so detection of certain specific minerals on Mercury, for example, which the MESSENGER spacecraft may be able to carry out when it begins its study of the planet in 2011, might support the theory.

In addition, the detection of hot, young planets around other stars, which might become possible over the next several years, might provide another line of evidence to support this conclusion, she said.

The research was funded by the National Science Foundation and NASA's Mars Fundamental Research Program.

A version of this article appeared in MIT Tech Talk on October 22, 2008 (download PDF).