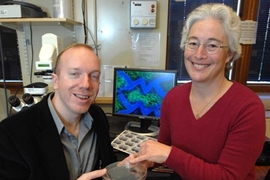 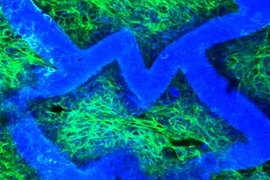 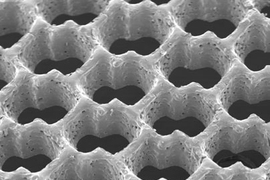 Broken hearts could one day be mended using a novel scaffold developed by MIT researchers and colleagues.

The idea is that living heart cells or stem cells seeded onto such a scaffold would develop into a patch of cardiac tissue that could be used to treat congenital heart defects, or aid the recovery of tissue damaged by a heart attack. The biodegradable scaffold would be gradually absorbed into the body, leaving behind new tissue.

The accordion-like honeycomb scaffold, reported in the Nov. 2 online edition of Nature Materials, is the first to be explicitly designed to match the structural and mechanical properties of native heart tissue. As a result, it has several advantages over previous cardiac tissue engineering scaffolds.

Further, the MIT team's general approach has applications to other types of engineered tissues. "In the long term we'd like to have a whole library of scaffolds for different tissues in need of repair," said Lisa E. Freed, corresponding author of the paper and a principal research scientist in the Harvard-MIT Division of Health Sciences and Technology (HST). Each scaffold could be tailor-made with specific structural and mechanical properties. "We're already on the way to a few other examples," Freed said.

With respect to the current work, "previous scaffolds did not necessarily possess structural or mechanical properties consistent with the native myocardial [heart muscle] structure," said George C. Engelmayr Jr., lead author of the paper and an HST postdoctoral fellow. Heart muscle, he explained, is "directionally dependent" -- meaning its cells are aligned in specific directions.

The researchers reasoned that "borrowing more closely from nature's lessons," as they write in Nature Materials, might lead to a tissue with properties closer to the real thing. So, using a laser similar to that used for eye surgery, they created a scaffold with directionally dependent structural and mechanical properties.

The scaffold has three principal advantages over its predecessors. First, its mechanical properties closely match those of native heart tissue. For example, it is stiffer when stretched circumferentially as compared to longitudinally.

Engelmayr found that he could essentially "dial in" specific mechanical properties for the polymer scaffold by varying the time it is allowed to set, or cure. He noted that with this ability, coupled with the flexibility of the laser technique, "we might be able to come up with even better pore shapes with better mechanical properties."

In a second advantage, the team found that a patch of tissue created from neonatal rat heart cells cultured on the scaffold showed directionally dependent electrophysiological properties similar to native tissue. In other words, when an electrical field was applied the engineered patch contracted more readily in one direction than in another.

In a third advantage, "the scaffold itself has an intrinsic ability to guide the orientation of cultured heart cells," Freed said (in 2004, Freed was part of another MIT team that showed that heart cells cultured on a traditional scaffold could also be coaxed into alignment, but only with electrical stimulation).

The researchers note that the scaffold used in the experiments described above has some limitations. For example, they write, it is "too thin to address reconstruction of full-thickness myocardium." However, as they report in Nature Materials, they have already begun addressing those problems by creating new honeycomb scaffolds that, among other things, allow much thicker, multi-layered tissue structures.

This work was sponsored by the National Institutes of Health, NASA, and Draper Laboratory.