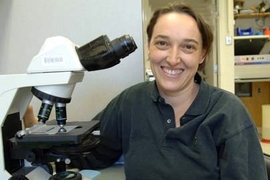 ↓ Download Image
Caption: Angelika Amon, an MIT biology professor, reports new insights into the role of proteins in cell division, work that could shed light on why errors occur during this process.
Credits: Photo / Donna Coveney

Caption:
Angelika Amon, an MIT biology professor, reports new insights into the role of proteins in cell division, work that could shed light on why errors occur during this process.
Credits:
Photo / Donna Coveney

Proteins that control cell division play a far more nuanced role than researchers previously thought in the process that gives rise to reproductive cells, according to new findings by MIT biologists.

The work, reported in the April 18 issue of Cell, could help scientists understand why errors occcur so often during this process, known as meiosis. Meiotic mistakes are a leading cause of miscarriage and birth defects such as mental retardation.

Meiosis is a critical part of the reproductive cycle, producing reproductive cells with only one set of chromosomes (eggs and sperm in humans, spores in yeast, the organism the researchers studied).

Meiosis is more complex than the other type of cell division, mitosis, which occurs when a cell splits into two "daughter cells," each identical to the original.

Both meiosis and mitosis are controlled by proteins known as cyclin-dependent kinases (CDKs). In humans, there are 11 different types of CDKs, and in yeast, there are nine.

During mitosis, the CDKs are largely interchangeable. Until now, researchers had assumed that the same was true during meiosis.

This study shows that different CDKs have different roles during meiosis, which occurs in two stages, meiosis I and meiosis II. The researchers found that a protein called clb1-CDK stimulates meiosis I, and clb3-CDK promotes meiosis II.

"For the first time, we're beginning to understand that maybe in mitosis it doesn't matter (which clb-CDKs are present), but when you start doing complicated things, it starts to matter which type of CDK is active and how it's regulated," said Amon, also a member of the new David H. Koch Institute for Integrative Cancer Research at MIT.

During meiosis, chromosomes line up along the cell's equator before being pulled into one of the resulting reproductive cells. Mistakes during that process lead to an extra or missing copy of one chromosome, which results in fatal defects or mental retardation, such as Down's Syndrome.

Amon's work could help provide a foundation for understanding why such errors occur so often. (It is estimated that 10 to 15 percent of human conceptions end in miscarriage, often because the fetus has the wrong number of chromosomes.)

"You have to understand the process in detail before you can go on and find out what's wrong with it," Amon said.

Part of the reason that no one has observed these different roles for CDKs before is that it is very difficult to get yeast cells to undergo meiosis in synchrony. Amon and Carlile, lead author of the paper, developed a technique to do just that, allowing them to see the novel behavior for the first time.

Eventually the researchers hope to discover whether meiosis in humans is controlled in similar ways.