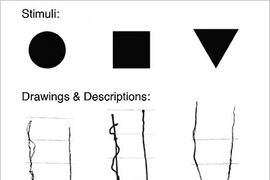 ↓ Download Image
Caption: Drawings of visual objects by a stroke victim known as BL. When a stimulus appears just below BL's blind area, the shape elongates upwards and into the blind area. He perceived circles as cigar shaped, squares as rectangles, and triangles as pencil shaped.
Credits: Graphic courtesy / Daniel Dilks, McGovern Institute for Brain Research at MIT, formerly of Johns Hopkins University 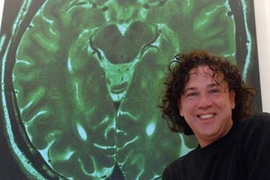 Caption:
Drawings of visual objects by a stroke victim known as BL. When a stimulus appears just below BL's blind area, the shape elongates upwards and into the blind area. He perceived circles as cigar shaped, squares as rectangles, and triangles as pencil shaped.
Credits:
Graphic courtesy / Daniel Dilks, McGovern Institute for Brain Research at MIT, formerly of Johns Hopkins University

It is well established that a child's brain has a remarkable capacity for change, but controversy continues about the extent to which such plasticity exists in the adult human primary sensory cortex.

Now, neuroscientists from MIT and Johns Hopkins University have used converging evidence from brain imaging and behavioral studies to show that the adult visual cortex does indeed reorganize--and that the change affects visual perception. The study appears online Sept. 5 in an advance publication of the Journal of Neuroscience.

The authors believe that as scientists find ways to use this adaptive ability, the work could have relevance to topics ranging from learning to designing interventions for improving recovery following stroke, brain injury, or visual disorders.

Animal studies conducted two decades ago and using single cell recording of neurons found that the adult animal brain can change, but shed little information about the adult human brain. In 2005, a functional magnetic resonance imaging (fMRI) study led by Professor Nancy Kanwisher at the McGovern Institute for Brain Research at MIT found evidence of plasticity in the visual cortex of adults with macular degeneration, an eye disease that deprives regions of the cortex of visual information.

But another fMRI study of macular degeneration found no such evidence, and an animal study using both single cell recordings and fMRI also questioned the 20-year-old animal work.

Lead author Daniel Dilks, a postdoctoral associate in Kanwisher's lab who conducted the current work while a graduate student at Johns Hopkins in senior author Michael McCloskey's lab, jumped into the fray when he found BL, a stroke patient.

BL's stroke damaged the optic radiation fibers, which transmit information from the eye to the primary visual cortex, but the cortex itself remained intact. The damage eliminated input from the upper left visual field to the corresponding region of the primary visual cortex, thereby depriving a region of cortex and creating a blind area in the upper left visual field.

The researchers wanted to find out what happened to that deprived piece of cortex. "We discovered that it took on new functional properties, and BL sees differently as a consequence of that cortical reorganization," explains Dilks.

BL had reported that things "looked distorted" in the lower left visual field (below his blind area). The researchers hypothesized that the distortions resulted from cortical reorganization in the deprived cortex. To isolate that distortion, they had BL fixate on a center dot while objects, such as squares, appeared in various parts of the visual field. As expected, BL saw nothing when a square appeared in his blind area.

Dilks is continuing this work in postdoctoral studies in Kanwisher's lab. In addition to Michael McCloskey, John Serences of University of California Irvine, and Benjamin Rosenau and Steven Yantis, both of Johns Hopkins, coauthored the Journal of Neuroscience paper. An Integrative Graduate Education and Research Traineeship and a Graduate Research Fellowship, both from the National Science Foundation, and the NIH funded the Johns Hopkins work.