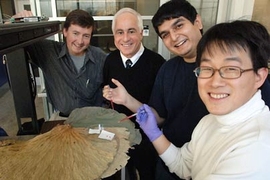 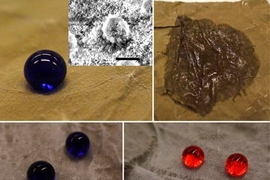 ↓ Download Image
Caption: A droplet of water forms a bead on the surface of a lotus left, top left, while a drop of hexadecane soaks the surface, top right. After the lotus leaf is coated with a new oil-repelling material developed at MIT, water still beads up, bottom left, and so does hexadecane, bottom right. Inset photo in the top left square shows an SEM micrograph of the lotus leaf surface.
Credits: Image courtesy / Anish Tuteja and Wonjae Choi, MIT

Caption:
A droplet of water forms a bead on the surface of a lotus left, top left, while a drop of hexadecane soaks the surface, top right. After the lotus leaf is coated with a new oil-repelling material developed at MIT, water still beads up, bottom left, and so does hexadecane, bottom right. Inset photo in the top left square shows an SEM micrograph of the lotus leaf surface.
Credits:
Image courtesy / Anish Tuteja and Wonjae Choi, MIT

MIT engineers have designed a class of material structures that can repel oils, a novel discovery that could have applications in aviation, space travel and hazardous waste cleanup. Such materials could be used to help protect parts of airplanes or rockets that are vulnerable to damage from being soaked in fuel, like rubber gaskets and o-rings.

"These are vulnerable points in many aerospace applications," said Robert Cohen, the St. Laurent Professor of Chemical Engineering and an author of a paper on the work that appeared in the Dec. 7 issue of Science.

"It would be nice if you could spill gasoline on a fabric or a gasket or other surface and find that instead of spreading, it just rolled off," Cohen said.

Creating a strongly oil-repelling, or "oleophobic" material, has been challenging for scientists, and there are no natural examples of such a material.

"Nature has developed a lot of methods for waterproofing, but not so much oil-proofing," said Gareth McKinley, MIT School of Engineering Professor of Teaching Innovation in the Department of Mechanical Engineering and a member of the research team. "The conventional wisdom was that it couldn't be done on a large scale without very special lithographic processes."

The tendency of oils and other hydrocarbons to spread out over surfaces is due to their very low surface tension (a measure of the attraction between molecules of the same substance).

Water, on the other hand, has a very high surface tension and tends to form droplets. For example, beads of water appear on a freshly waxed car (however, over a period of time, oil and grease contaminate the surface and the repellency fades). That difference in surface tension also explains why water will roll off the feathers of a duck, but a duck coated in oil must be washed with soap to remove it.

The MIT team overcame the surface-tension problem by designing a type of material composed of specially prepared microfibers that essentially cushion droplets of liquid, allowing them to sit, intact, just above the material's surface.

When oil droplets land on the material, which resembles a thin fabric or tissue paper, they rest atop the fibers and pockets of air trapped between the fibers. The large contact angle between the droplet and the fibers prevents the liquid from touching the bottom of the surface and wetting it.

The microfibers are a blend of a specially synthesized molecule called fluoroPOSS, which has an extremely low surface energy, and a common polymer. They can be readily deposited onto many types of surfaces, including metal, glass, plastic and even biological surfaces such as plant leaves, using a process known as electrospinning.

The researchers have also developed some dimensionless design parameters that can predict how stable the oleophobicity, or oil-resistance, between a particular liquid and a surface will be. These design equations are based on structural considerations, particularly the re-entrant nature (or concavity) of the surface roughness, and on three other factors: the liquid's surface tension, the spacing of the fibers and the contact angle between the liquid and a flat surface.

Using these relationships, the researchers can design fiber mats that are optimized to repel different hydrocarbons. They have already created a nonwoven fabric that can separate water and octane (jet fuel), which they believe could be useful for hazardous waste cleanup.

The Air Force, which funded the research and developed the fluoroPOSS molecules, is interested in using the new materials to protect components of airplanes and rockets from jet fuel.

Lead author of the paper is Anish Tuteja, a postdoctoral associate in MIT's Department of Chemical Engineering. Other MIT authors are Wonjae Choi and Minglin Ma, graduate students in chemical engineering, and Gregory Rutledge, professor of chemical engineering. Joseph Mabry and Sarah Mazzella of the Air Force Research Laboratory at Edwards Air Force Base are also authors on the paper.