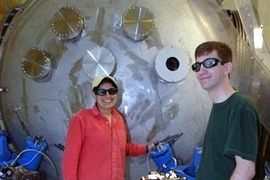 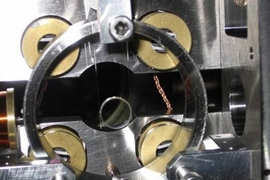 ↓ Download Image
Caption: MIT researchers have developed a technique to cool this dime-sized mirror (small circle suspended in the center of large metal ring) to within one degree of absolute zero.
Credits: Photo / Christopher Wipf 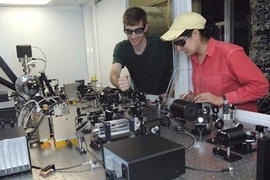 ↓ Download Image
Caption: Assistant professor Nergis Mavalvala, right, and Ph.D. student Thomas Corbitt look over the laser system they use to cool a coin-sized mirror to within one degree of absolute zero.
Credits: Photo / Donna Coveney

Caption:
MIT researchers have developed a technique to cool this dime-sized mirror (small circle suspended in the center of large metal ring) to within one degree of absolute zero.
Credits:
Photo / Christopher Wipf

Caption:
Assistant professor Nergis Mavalvala, right, and Ph.D. student Thomas Corbitt look over the laser system they use to cool a coin-sized mirror to within one degree of absolute zero.
Credits:
Photo / Donna Coveney

Using a laser-cooling technique that could one day allow scientists to observe quantum behavior in large objects, MIT researchers have cooled a coin-sized object to within one degree of absolute zero.

This study marks the coldest temperature ever reached by laser-cooling of an object of that size, and the technique holds promise that it will experimentally confirm, for the first time, that large objects obey the laws of quantum mechanics just as atoms do.

Although the research team has not yet achieved temperatures low enough to observe quantum effects, "the most important thing is that we have found a technique that could allow us to get (large objects) to ultimately show their quantum behavior for the first time," said MIT Assistant Professor of Physics Nergis Mavalvala, leader of the team.

The MIT researchers and colleagues at Caltech and the Albert Einstein Institute in Germany will report their findings in an upcoming issue of Physical Review Letters.

"You always learn in high school physics that large objects don't behave according to quantum mechanics because they're just too hot, and the thermal energy obscures their quantum behavior," said Thomas Corbitt, an MIT graduate student in physics and lead author of the paper. "Nobody's demonstrated quantum mechanics at that kind of (macroscopic) scale."

To see quantum effects in large objects, they must be cooled to near absolute zero. Such low temperatures can only be reached by keeping objects as motionless as possible. At absolute zero (0 degrees Kelvin, -273 degrees Celsius or -460 degrees Fahrenheit), atoms lose all thermal energy and have only their quantum motion.

In their upcoming paper, the researchers report that they lowered the temperature of a dime-sized mirror to 0.8 degrees Kelvin. At that temperature, the 1 gram mirror moves so slowly that it would take 13 billion years (the age of the universe) to circle the Earth, said Mavalvala, whose group is part of MIT's LIGO (Laser Interferometer Gravitational-wave Observatory) Laboratory.

The team continues to refine the technique and has subsequently achieved much lower temperatures. But in order to observe quantum behavior in an object of that size, the researchers need to attain a temperature that is still many orders of magnitude colder, Mavalvala said.

To reach such extreme temperatures, the researchers are combining two previously demonstrated techniques-optical trapping and optical damping. Two laser beams strike the suspended mirror, one to trap the mirror in place, as a spring would (by restoring the object to its equilibrium position when it moves), and one to slow (or damp) the object and take away its thermal energy.

Combined, the two lasers generate a powerful force--stronger than a diamond rod of the same shape and size as the laser beams--that reduces the motion of the object to near nothing.

Using light to hold the mirror in place avoids the problems raised by confining it with another object, such as a spring, Mavalvala said. Mechanical springs are made of atoms that have their own thermal energy and thus would interfere with cooling.

As the researchers get closer and closer to reaching the cold temperature they need to see quantum behavior, it will get more difficult to reach the final goal, Mavalvala predicted. Several technical issues still stand in the way, such as interference from fluctuations in the laser frequency.

Once the objects get cold enough, quantum effects such as squeezed state generation, quantum information storage and quantum entanglement between the light and the mirror should be observable, Mavalvala said.

The research was funded by the National Science Foundation and the German Federal Ministry of Education and Research.