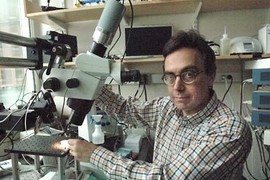 ↓ Download Image
Caption: Carlos Lois and colleagues have found that adult stem cells produced in the brain are preprogrammed to make only certain kinds of connections. Lois is an assistant professor of neuroscience in MIT's Picower Institute for Learning and Memory.
Credits: Photo / Donna Coveney

Caption:
Carlos Lois and colleagues have found that adult stem cells produced in the brain are preprogrammed to make only certain kinds of connections. Lois is an assistant professor of neuroscience in MIT's Picower Institute for Learning and Memory.
Credits:
Photo / Donna Coveney

Stem cell therapies for the brain could be much more complicated than previously thought, an MIT research team's latest finding suggests.

In a study published in Public Library of Science (PloS) Biology on Nov. 13, MIT scientists reported that adult stem cells produced in the brain are preprogrammed to make only certain kinds of connections--making it impossible for a neural stem cell originating in the brain to be transplanted to the spinal cord, for instance, to take over functions for damaged cells.

Some researchers hope to use adult stem cells produced in the brain to replace neurons lost to damage and diseases such as Alzheimer's. The new study calls this into question.

"It is wishful thinking to hope that adult stem cells will be able to modify themselves so that they can become other types of neurons lost to injury or disease," said Carlos E. Lois, assistant professor of neuroscience in MIT's Picower Institute for Learning and Memory.

In developing embryos, stem cells give rise to all the different types of cells that make up the body--skin, muscle, nerve, brain, blood and more. Some of these stem cells persist in adults and give rise to new skin cells, stomach lining cells, etc. The idea behind stem-cell therapy is to use these cells to repair tissue or organs ravaged by disease.

To realize this potential, the stem cells have to be "instructed" to become liver cells, heart cells or neurons. The MIT study, which looked only at adult neural stem cells, suggests it will be necessary to learn how to program any kind of stem cell--embryonic, adult or those derived through other means--to produce specific types of functioning neurons. Without this special set of instructions, a young neuron will only connect with the partners for which it was preprogrammed.

The adult brain harbors its own population of stem cells that spawn new neurons for the duration of its life. The MIT study shows that a neural stem cell is irreversibly committed to produce only one type of neuron with a preset pattern of connections. This means that a given neuronal stem cell can have only limited use in replacement therapy.

"A stem cell that produces neurons that could be useful to replace neurons in the cerebral cortex (the type of neurons lost in Alzheimer's disease) will be most likely useless to replace neurons lost in the spinal cord," said Lois, who also holds an appointment in MIT's Department of Brain and Cognitive Sciences. "Moreover, because there are many different types of neurons in the cerebral cortex, it is likely that we will have to figure out how to program stem cells to become many different types of neurons, each of them with a different set of prespecified connections."

"In the stem cell field, it is generally thought that the main limitation to achieve brain repair is simply for the new neurons to reach a given brain region and to ensure their survival. Once there, it has been assumed that stem cells will 'know what to do' and will become the type of neuron that is missing. It seems that is not the case at all. Our experiments indicate that things are much more complicated," Lois said.

Lois and colleagues from MIT's departments of brain and cognitive sciences and biology found that the stem cells give rise to neurons that become a very specific neuronal type that is already prespecified to make a defined set of connections and not others.

Even if the stem cells are transplanted to other parts of the brain, they do not change the type of connections they are programmed to make.

This work is supported by the National Institutes of Health.